People with gastrointestinal symptoms and immune system dysfunction represent one of the fastest-growing and most clinically challenging patient subsets.

This constellation of problems can manifest as chronic fatigue syndrome, small bowel bacterial and/or fungal overgrowth (SIBO/SIFO), and autoimmunity. It’s estimated that over 50 million Americans suffer from at least one autoimmune condition.

The current healthcare model treats autoimmunity as a genetic condition that cannot be cured, and this mindset guides physicians to use immunosuppressive drugs as the primary tools for managing autoimmune symptoms.

But this approach fails to recognize that immune system changes are often tied to dysbiosis and disruption of GI barrier function, which can result in increased microbial and antigenic translocation from the gut lumen to the bloodstream. The result is excessive triggering of immune responses, which in turn drive further tissue damage.

The use of oral serum-derived bovine immunoglobulins (SBI) to bind and remove these excess immune triggers is one of the best-established supplemental measures for reducing immune system burden, improve gut barrier function, and reduce the downstream effects of uncontrolled inflammation.

When the intestinal mucosa becomes abnormally permeable, it may permit unprocessed antigens–or even intact organisms–from the gut lumen to enter the lamina propria and activate immune system responses. This then increases susceptibility to autoimmune cross-reactivity.

In fact, one of the leading theories for the genesis of autoimmune diseases holds that the process begins with exposure to unprocessed non-self-antigens that have breached the intestinal barrier (Fasano A. Clin Rev Allergy Immunol. 2012). A breakdown of physical barrier integrity and chronic exposure to antigens creates the conditions needed to elicit a hypervigilant immune response.

We can generalize unprocessed antigens as anything with a pathogen-associated molecular pattern (PAMP). These molecular patterns are recognized by pattern recognition receptors (PRRs) on immune cells. The first PRRs to be identified were the Toll-like receptors (TLRs), a family of 13 cell surface receptors that recognize specific microbial components, and regulate the innate immune system’s antigen-specific responses (Takeda K, Shizuo A. Curr Protoc Immunol. 2015).

When a patient has increased intestinal permeability, the immune system is forced to engage with excessive quantities of PAMPs. The downstream effect can be that the antibodies and T-cells generated by the PRR-signals will cross-react with normal tissue It’s a phenomenon known as molecular mimicry (Wucherpfennig KW. J Clin Invest. 2001)

There is a way to limit the level of exposure to the unprocessed antigens and microbes that trigger these patterns of inflammation, tissue damage, and immunological shock. Several studies demonstrate the expansive binding capacity of serum-derived bovine immunoglobulins for many of the PAMPs associated with human pathogens. This includes C. difficile toxins A and B, E. coli, H. pylori, and lipopolysaccharides (Detzel CJ, et al. PloS One. 2015. Tomita GM, et al, J Dairy Sci. 1995).

SBIs taken orally are able to resist the digestive process. The Fab regions on the immunoglobulins are able to bind antigens within the gut lumen, creating complexes too large to cross the intestinal epithelium. This allows for complete removal of the antigenic complex, thus shielding the immune system from pathogenic stimuli (Bogstedt AK, et al. Antimicrob Agents Chemother. 1997)

This prevents any risk of immune interaction in the bloodstream, such as binding of complement or inflammatory cytokine release.

Recent ELISA binding data from Proliant Biologicals, the company that produces the SBI complex currently used in dietary supplement formulations, shows that SBIs have the capacity to bind antigens associated with C. albicans, as well as H. pylori CagA protein, CDT subunits A and C, and Shiga-like toxin type 1.

Binding and removal of antigens and pathogens prevents excessive release of inflammatory cytokines such as IL-1, IL-18 and TNF (Detzel CJ, et al. PLoS One. 2015), and restores the normal healing processes in the gut epithelium, ultimately strengthening the epithelial barrier.

Consider the use of oral, serum-derived bovine immunoglobulin IgG with broad-spectrum binding capabilities when developing comprehensive protocols for patients showing patterns suggestive of intestinal permeability and autoimmunity. By preventing PAMPs from being presented to the immune system, SBIs remove the burden on the immune system while simultaneously addressing dysbiosis, which is the first step in allowing the enterocytes to heal.

Given the prevalence of opportunistic co-infections in the setting of dysbiosis and immune suppression, the latest data showing that SBIs can bind whole organisms such as Candida are especially promising. They suggest an approach to neutralize such infections which will also allow barrier healing, and a full immune recovery. 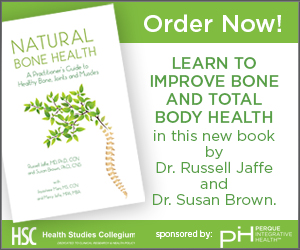