EMR Systems Not Worth the Trouble for Many Holistic Practitioners

Half of all holistic healthcare professionals still do not have electronic medical records in their practices–and many of them have no real intention of ever incorporating EMRs, according to data from Holistic Primary Care’s 2016 practitioner survey.

Despite massive Silicon Valley and Wall Street investment in healthcare IT, physicians and other health professionals continue to show ambivalence toward digital doctoring. In general, solo and small group practices have been slow to embrace EMR systems. Many doctors that do use EMRs are only doing so because they work in larger healthcare systems which have forced the adoption of digital record-keeping. 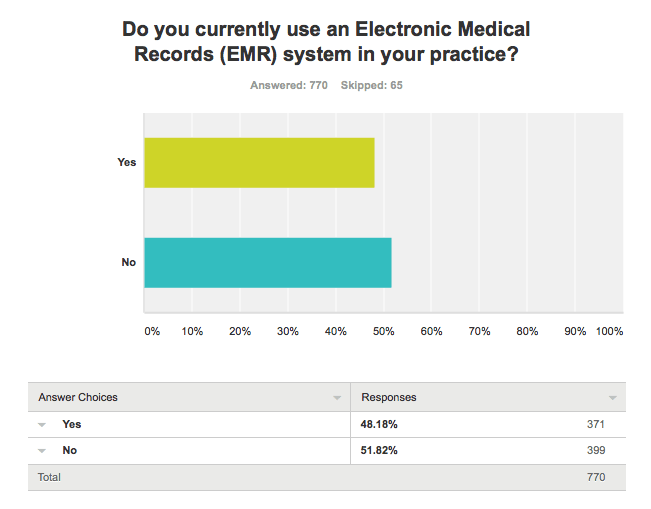 HPC’s survey, which obtained responses from a total of 852 practitioners, indicates that only 48% currently have EMRs in their practices.
EMR use was definitely higher, at 69%, among the MDs who represented roughy 25% of the total respondents, compared with the non-MD practitioners in the cohort (DCs, NDs, Nurses, nutrition professionals).

Too Much Bother, Not Enough Incentive

Not surprisingly, clinicians in insurance-based practices were much more likely (85%) to have EMRs than those in direct-pay, concierge style, or mixed-model practices.

The most common reason for not having an EMR system? “Too much trouble, not enough incentive.”

A total of 47% of the EMR-free respondents gave this answer. Other common reasons were “Good systems are too costly” (27%); “Can’t find a system that fits the needs of my practice” (21%); and “I don’t trust the security and privacy of EMR systems” (16%).

But some holistic practitioners simply like old-fashioned paper charts. In the verbatim write-in comments, a number of practitioners say they are very happy with their existing hand-written systems, and that they experience computer-based technology as an unwelcome intrusion into the relationship with their patients.

“My patients appreciate direct human contact, and my paper calendar has NEVER crashed in 38 years,” wrote one old-timer. “Besides that I know too much about the affects of EMFs and how they change the healing environment.”

Age is definitely a predictor of EMR use: 76% of the respondents in the 30-40 year-old age bracket have EMRs compared with 48% of those in the 51-60 year-old cohort.

The ambivalence holistic practitioners show toward EMRs extends toward a lot of other high-tech tools. The survey indicated that only 32% of respondents are using online schedulers; another 32% are using web-based patient portals. Just over a quarter (26%) are using tablet computers, and only 18% are using smartphone based clinical reference tools.

Despite the hype around the “quantified self” and personalized medicine movements, only 11% of the respondents have incorporated patient self-tracking apps (things like FitBit or the Apple Watch) into their practices.

While there were some notable age differences in embrace of these various tech tools—the 30-40 crowd was more likely than the 51-60 crowd to use online scheduling (47% vs 30%) and web-based patient portals (45% vs 32%), overall the age splits were pretty small. Telemedicine, which has received wide coverage in both consumer and business media, has not made much headway with holistic practitioners of any age.