Although hydrogen (H2) is well known as an alternative fuel, recognized as such by the Energy Policy Act of 1992, it was not until 2007 that it began to really make the scene in medicine.

Since then, there’s been an explosion of research on the use of H2 for a wide range of medical conditions. Evidence is mounting that H2 has potential benefits in the treatment of inflammatory and autoimmune conditions like psoriasis and rheumatoid arthritis. 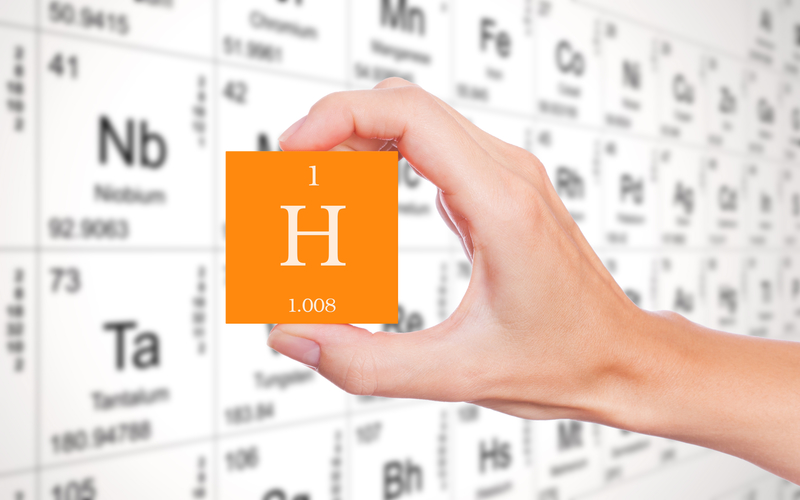 Hydrogen was first used in a medical context in the 1940s, for the purpose of preventing decompression sickness in divers. However, it was largely impractical due to its high flammability; H2 is easily ignited at a concentration of approximately 4% in air.

In 2007, the first research using H2 dissolved in air at a concentration of less than 4%, or in a cellular nutrient medium, was published in Nature Medicine. Researchers at the Nippon Medical School, Kawasaki City, Japan, looked at the potential of H2 to minimize oxidative damage in a rodent model of brain injury. They showed that H2 is a powerful antioxidant that easily and rapidly diffuses across cell membranes (Ohsawa I, et al. Nat Med. 2007; 13(6): 688-94).

Since then, H2 has been administered in clinical studies as an inhaled gas, dissolved in water for oral delivery or for topical application, and infused into saline solution for intravenous delivery.

One of the curious things we’ve learned from the recent spate of studies is that the antioxidant efficacy of H2 is related to the fact that it is a weak reducing agent, not a strong one (Matei N, et al. Med Gas Res. 2018; 8(3): 98–102). This means it preferentially reacts and neutralizes the most highly reactive and toxic oxidants (such as the hydroxyl radical [•OH] and peroxynitrite [ONOO-]), while sparing weaker but biologically necessary oxidants like nitric oxide (NO) and hydrogen peroxide (H2O2).

The antioxidant characteristics of H2, its biological effects, and its therapeutic benefits have been explored in roughly 450 recent publications reflecting over 170 different human and animal diseases. Ishihara and colleagues at the College of Life and Health Sciences, Chubu University, Japan, summarized the findings from 321 of these studies published between 2007 and 2015. In aggregate, they report that H2 treatment gives meaningful effects in essentially all organ systems (Ichihara M, et al. Med Gas Res. 2015; 5: 12).

Two years ago, Ge and colleagues at Taishan Medical University in China published a comprehensive review of the literature on H2, with detailed explanations of its various mechanisms. While they acknowledge that there are still many unanswered questions, they are firm in their conclusion that, “H2-based therapies show great promise as novel and innovative tools to prevent and treat human ailments that are currently major health burdens globally” (Ge L, et al. Oncotarget. 2017; 8(60): 102653–102673).

Because of its size, neutral charge, relative non-reactivity, and non-polarity, H2 readily passes through cellular membranes as well as the blood–brain barrier. Consequently, it can get into all tissues and cellular compartments.

After consumption of H2-rich water, the H2 concentration of the breath and plasma rises in a dose-dependent manner, peaking between 5 to 15 minutes after ingestion, and returning to baseline roughly 45 to 90 minutes later, depending on the amount ingested. But H2’s physiological effects are not limited to the time it remains in circulation, as has been shown in a number of studies.

For example, Hara and colleagues showed that human umbilical vein cell cultures grown in a hydrogen-rich medium were resistant to the damaging effects of one form of dioxin long after the H2 was undetectable in the medium (Hara F, et al. Circ J. 2016; 80(9): 2037-46).

The antioxidant effects of H2 are most prominent under conditions of high physiological and oxidative stress—the very situations in which we most need those effects (Ohta S. Methods Enzymol. 2015; 555: 289-317).

H2 turns on the transcription of other important antioxidants, detoxification enzymes, and proteins required for glutathione synthesis and recycling

The body always experiences some degree of oxidative stress, and actually needs mild oxidative stress in order to function properly. Naturally occurring oxidants such as NO and H2O2 trigger cellular signaling pathways and necessary processes like vasodilation. Mild physical stressors such as exercise, intermittent dietary restriction, and even mild ischemia enhance these healthy processes and generally have a beneficial effect (Mattson MP. Ageing Res Rev. 2008; 7(1): 1-7).

However, when the body is put into states of constant high stress, as is the case in severe emotional or psychological duress, during extreme physical exertion, in chronic diseases, or when undergoing invasive and toxic therapies for a condition like cancer, the endogenous responses are pushed beyond the threshold of adaptability.

It is precisely in these conditions, when oxidative stress has gone beyond the normal adaptive threshold, that many of the benefits of H2 are truly realized. Molecular hydrogen is able to reduce the excessive quantities of many of the most damaging oxidants (Sakai T, et al. Int J Mol Sci. 2019; 20(2), 456; Itoh T, et al. Biochem Biophys Res Commun. 2011; 411(1): 143-149).

In addition to reducing •OH and ONOO- radicals, H2 turns on the transcription of other important antioxidants, detoxification enzymes, and proteins required for glutathione synthesis and recycling (Buendia I, et al. Pharmacol Ther. 2016; 157: 84-104). 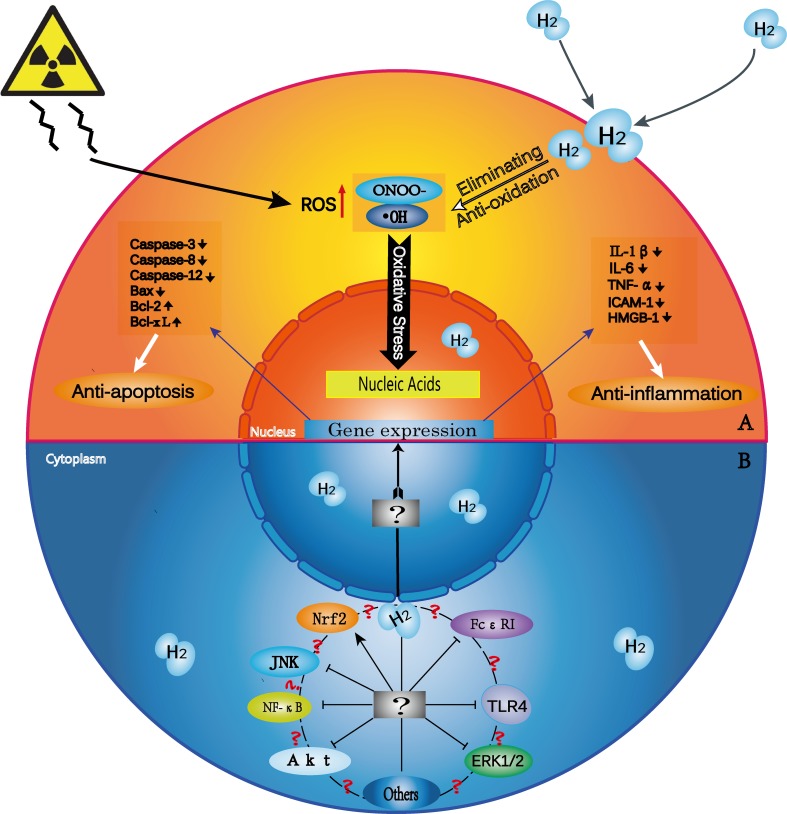 Numerous models of lipopolysaccharide (LPS)-induced inflammation and ischemia/reperfusion injury have shown that treatment with H2, in its various forms, helps protect against excessive inflammation and subsequent cellular and tissue injury. Treatment with H2 decreases the overproduction of proinflammatory cytokines and oxidants, including NO, interleukin (IL)-6, IL-1β, and tumor necrosis factor alpha (TNFα).

Given all the data describing the antioxidant and anti-inflammatory properties of H2, it is not surprising that researchers have begun looking at it in the context of autoimmune disease.

The first publication of this nature was an open-label pilot study looking at the impact of consumption of supersaturated H2 water on patients with rheumatoid arthritis (RA).

Twenty patients with RA drank 530 ml of water containing 4-5 parts per million molecular hydrogen daily for 4 weeks. This was followed by a 4-week washout period, and then another 4-week cycle of daily H2 water.

Fifteen of the 20 participants were either on methotrexate or abatacept, or a combination of these two drugs. The other five were not on any RA medications. No one in the study was being treated with steroid hormones.

They concluded that H2 “effectively reduces oxidative stress in patients with this condition,” noting that this correlated with amelioration of symptoms.

RA disease activity scores, based on assessment of 28 joints (DAS28), improved in most participants. In the first four-week treatment cycle, scores decreased in 18 of the 20 patients. By the end of the study, the average DAS28 score had decreased from a baseline mean of 3.83 to 2.26. Five of the patients achieved remissions (defined for the purpose of this study as a DAS28 < 2.3), and 4 were totally symptom-free by the end of the trial (Ishibashi T, et al. Med Gas Res. 2012; 2(1): 27).

This is not surprising given that reactive oxygen species (ROS), especially the •OH hydroxyl radical, are thought to be key drivers of the tissue damage that characterizes RA (Khojah HM, et al. Free Radic Biol Med. 2016; 97: 285-291).

One particularly interesting finding from this study was that the DAS28 score continued to improve during the four-week washout period, suggesting that the H2 treatment continued to have residual effects. Urinary 8-hydroxy-deoxyguanosine (8-OHdG) levels, a marker of DNA oxidative damage also improved not only during treatment but during the washout phase as well, remaining below the baseline through the end of the study.

It is possible that some of the longer-term effects seen with H2 are due as much to its impact on cellular signal transduction, protein activity, and genetic transcription, as to its direct antioxidant effects (Qian L, et al. Dordrecht, Netherlands: Springer; 2015).

Building on their initial pilot study, Ishibashi and colleagues studied H2-saline infusion treatment in a cohort of 24 RA patients. The participants were randomized to be treated with either 500 ml pure saline, or saline infused with H2 to a concentration of 1.6 ppm. The intravenous treatments were given daily for five consecutive days.

The DAS28 scores in the H2-treated group decreased from an average of 5.18 at baseline to 4.02 immediately after the five days of infusions. Four weeks after the final treatments, the average score was 3.74. There were no meaningful changes in DAS28 scores among the subjects getting the placebo saline infusions (Ishibashi T, et al. Int Immunopharmacol. 2014; 21(2): 468-73).

The investigators also reported statistically significant reductions in the levels of IL-6 and matrix metalloproteinase-3 (MMP-3)—two key markers of inflammation and joint damage—among the H2-treated patients. In the placebo group, these markers increased. MMP-3 is a strong predictor of joint destruction in people with RA (Yamanaka H, et al. Arthritis Rheum. 2000; 43(4): 852-58).

Ishibashi’s group has also begun exploring the potential of H2 as a treatment for psoriasis. They published a series of three cases using a variety of different H2 administration techniques: inhalation, intravenous infusion of H2-saline, and oral ingestion of H2-infused water.

Regardless of the mode of delivery, the treated patients showed significant improvements in skin lesions and psoriatic arthritis symptoms. The visually-obvious clearance of lesions and the reductions of DAS28 and Psoriasis Area Severity Index (PASI) scores were accompanied by decreases in the levels of inflammatory cytokines such as TNF-α, IL-6, and IL-17 (Ishibashi T, et al. Mol Med Rep. 2015; 12: 2).

Bathing in H2-rich water also has been studied as a treatment for psoriasis. In a study of 41 psoriasis patients, H2 baths resulted in a 75% or greater improvement in the PASI score in 10 of 41 patients after eight weeks. In comparison, only 1 of 34 patients in the control group showed this level of improvement (Zhu Q, et al. Sci Rep. 2018; 8(1): 8051).

Whole-body bathing may not be practical for most psoriasis patients, but soaking a portion of the body that is most affected with psoriasis lesions in H2-rich water is not tremendously difficult and worthy of consideration.

Because H2 is produced to some extent by the bacteria normally present in the digestive tract, our bodies are routinely exposed to it.

In one study, researchers observed hypoglycemic episodes in an insulin-dependent patient with mitochondrial myopathy, who was treated with hydrogen-enriched water. The problem was resolved by lowering the patient’s insulin dose (Ito M, et al. Med Gas Res. 2011; 1(1): 24).

H2 has not been clinically studied as an intervention for young children or for women during pregnancy. However, animal studies in these settings have shown protective effects against disease and toxin exposure. This positive effect extends to fetal animals in utero (Nakano T, et al. J Clin Biochem Nutr. 2015; 57(3): 178–182).

The most convenient way for people to obtain the benefits of molecular hydrogen is via supplements that can release precise doses of H2 when mixed with plain water. Typically, these are effervescent tablets containing magnesium and a natural organic acid which react with water to release H2.

The concern about flammability of molecular hydrogen, which limited the medical utility of hydrogen gas in the 1940s, does not pertain to H2-rich water or to H2 supplements, because the amount of H2 in saturated or even supersaturated water is far below the flammability threshold.

With so much promising data from pilot clinical trials and animal studies, we can expect to see more clinical research on H2 for treatment of autoimmune conditions in the coming years. It is a very safe, low-cost approach, and it’s potential to give sustained benefits for weeks after cessation of the intervention is particularly exciting, as this would minimize cost and the hassle of having to take daily supplements indefinitely.