Vitamin D supplementation during pregnancy could reduce incidence of preterm births by 60%. 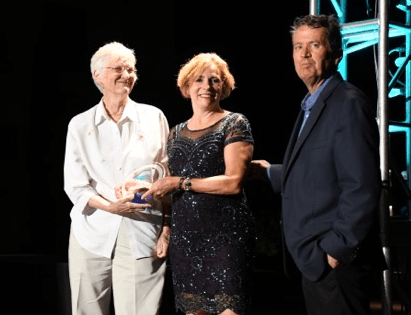 Carole Baggerly of Grassroots Health, and Karen Howard, executive director of the Organic and Natural Health Association (ONHA), want to make sure the world learns this vital fact.

As we reported in the Summer edition of Holistic Primary Care, the two health advocates are also pushing the Food and Drug Administration to permit supplement companies to make preemie prevention claims for vitamin D products, something that’s currently prohibited by existing regulations.

For their efforts on both the research and the consumer advocacy fronts, Baggerly and Howard were recently recognized with Nutrition Business Journal’s 2018 Education Award.

“We hear every day, “Take charge of your health.” The question is “How?” We are trying to address that, “How” for any consumer, any person interested in their health” said Baggerly at the awards ceremony, held at the annual NBJ Summit in Palos Verdes, CA.

In partnership with ONHA, Grassroots Health is working to simultaneously foster clinically meaningful studies of the impact of supplements on common—and expensive—conditions, implement evidence-based shifts in clinical practice patterns, and educate the public about the risks associated with various deficiencies.

Their efforts on preterm birth prevention centered on a compelling study at the Medical University of South Carolina, where the preterm birth rate of 18% is among the highest in the country. By providing free vitamin D to all women receiving maternity care at MUSC, the center was able to reduce the risk by almost two thirds (McDonnell S, et al. PLoS One. 2017).

“It’s quite frankly criminal that families do not have access to this information when there is more than a foot of research that validates MUSC’s findings for reduction of preterm births through vitamin D supplementation,” said Howard, in an official statement following the NBJ award. One of ONHA’s major objectives is to spread the word.

To that end, the organization has launched a nationwide Nutrient Power media campaign to educate the general public about the health risks associated with common nutrient deficiencies, the potential benefits of judicious, evidence-guided supplementation, and the importance of knowing one’s levels of basic nutrients.

The campaign, which has already reached roughly 250 million consumers, has engaged more than 12,000 people in self-testing to monitor their vitamin D status, and self-testing kit, and an additional 1,000 who are now using the omega-3 index test to track their levels.

Baggerly and Grassroots Health are extending their vitamin D efforts far beyond the prevention of preterm births, which, incidentally, cost the nation approximately $12 billion annually, according to the March of Dimes. This vitamin has myriad health benefits.

“You can prevent 80% of breast cancer with nothing more than vitamin D. We’re also working with a diabetes group now that will demonstrate that you can also prevent Type 1 diabetes,” she said of the organization’s new “Call to D*action” campaign.

The group is also currently working on an “entirely new personal health information system” called, My Data, My Answers.

Howard says the two organizations plan to continue their collaboration, building on the initial success of the vitamin D campaign and applying the model of clinical research plus simultaneous public education to 13 other key nutrients.

Holistic Primary Care applauds the efforts of ONHA and Grassroots Health to bring much needed creative disruption to healthcare practice. The NBJ accolade is very well deserved. We will be following their ongoing efforts closely.