A recent photo exhibit at the Sydney International Food Festival tells an interesting tale about culture, cuisine and by extension, health.

Whybin/TWBA, a cutting-edge Australian ad agency, reproduced flags of 18 different nations, using the foods most commonly associated with those nations in popular imagination. 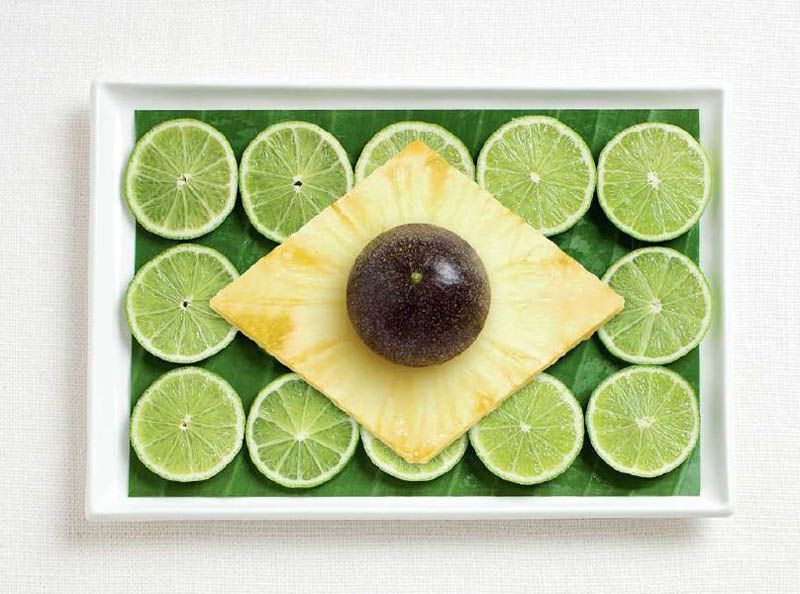 Japan’s rising sun flag, for example, is represented as a circular slab of deep red maguro tuna, atop a bed of sushi rice. Vietnam’s flag features a slice of bright yellow starfruit in a field of maroon rambutans and lychees. India vast culinary heritage is represented by vibrant orange chicken tikka masala, atop a band of basmati rice, and a deep green strip of cheera thoran (spinach curry).

Brasil is all about the fruit: half a purple passionfruit atop a diamond slab of pineapple, centered on sliced limes and banana leaf. Italy is a vertical stripe of spaghetti, flanked by brilliant green basil and crimson tomatoes.

The UK’s Union Jack is rendered in red and blue jams on a scone spread with cream. France’s Tricoleur is done up in blue cheese, brie and red grapes.

What about Old Glory? The Aussie agency represented the Stars & Stripes with hot dogs, buns and mustard. Their own Australian flag was created as a meat pie.

Granted the artists were stereotyping, and constrained to food choices that matched the flags’ colors. Nonetheless, the exhibit manages to say a lot—without words– about nutrition and health up and down the global food chain.

Taste a sampling of Whybin’s “Food Flag” smorgasbord on Marvelous, a website that spotlights intriguing artwork and photography from around the world.