Home | Topics | Cooking For Health | Coconut Oil: From Food to Medicine and Back
View Cart

Coconut Oil: From Food to Medicine and Back 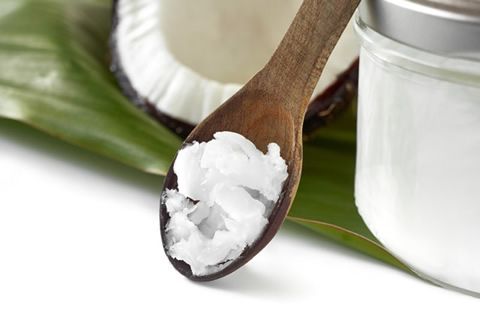 Over the last few years, the popularity of various coconut products has skyrocketed among health-conscious people in the US. Once a scorned source of saturated fat, coconut oil in particular has earned a renewed reputation as a beneficial nutritional powerhouse and an exceptional healing agent.

This shift in thinking about coconut oil aligns with a growing body of scientific evidence that affirms its myriad powerful pharmacological properties.

Coconut flour, which is naturally gluten-free, boasts a low glycemic index and high fiber content. It can be used safely in baking and cooking by people with celiac disease and other forms of gluten-intolerance.

Coconut oil—not to be confused with palm oil, which comes from a completely different tree—is a cornucopia of healthful compounds.

Extracted from the kernel or “meat” of mature coconuts, coconut oil is found in many natural personal care products and makes a simple, safe, and chemical-free moisturizer for dry skin and hair.

In one example, researchers at the University of Kerala in India found that wounded rats treated with large amounts of topically applied virgin coconut oil exhibited both increased antioxidant enzyme activities and a decreased healing time, as compared to those receiving less or no coconut oil (Nevin & Rajamohan. Skin Pharm Physiol. 2010; 23(6): 290–297).

Antimicrobial Effects: Compounds in coconut oil appear to have antimicrobial activity. In one study, coconut oil was identified as an effective antifungal treatment active against various species of Candida. Notably, when compared to the universal prescription antifungal, fluconazole, coconut oil displayed 100% effectiveness against the Candida albicans strain, leading researchers to conclude that coconut oil “should be used in the treatment of fungal infections in view of emerging drug-resistant Candida species” (Ogbolu, et al. J Med Food. 2007; 10(2): 384-387).

Researchers who used coconut oil as a topical remedy for dry skin and for bacterial skin infections report that it is effective against Staph infections in patients with atopic dermatitis (Verallo-Rowell, et al. Derm. 2008; 19(6): 308-315).

Lauric acid also possesses anti-parasitic properties. In a study examining its effects on the Giardia duodenalis parasite, investigators determined that lauric acid is not only anti-giardial, but is “comparable to […] metronidazole, the drug of choice in the treatment of giardiasis” (Rayan, et al. Paras Res. 2005; 97(3): 191-200).

Though much of this research is still preliminary, it is worthy of attention, given the rising concerns around antibiotic resistance. Coconut oil’s apparent anti-parasitic, antibacterial, antifungal, and antiviral properties could be harnessed as a major boon to public health. Widely available and lacking the harsh side effects of many conventional drugs, coconut oil could be used as a safer, more cost-effective natural alternative to mainstream treatments for infectious disease.

At one time, the immense healing potential of coconut oil was overshadowed by controversy about its saturated fat content. The notion that coconut oil is unhealthy was based on a misconception about the nature of various types of saturated fats, says nutrition expert and Institute for Functional Medicine consultant, Barb Schlitz, MS, RN.

Schlitz explains that the unusual composition of fatty acids in coconut oil may explain many of its unique health benefits. Unlike LCFAs, she says, MCFAs do not negatively affect lipid profiles – and instead, they may actually help lower the risk of heart disease and atherosclerosis.

Conversely, in India, movement away from a diet high in traditional fats including coconut oil and towards one higher in polyunsaturated fats was associated with increased incidence of cardiovascular disease, higher LDL cholesterol, and lower HDL cholesterol.

In addition to their potential heart-health benefits, the primary MCFAs found in coconut oil might also be useful in treating epilepsy, neurodegeneration, and other brain disorders. Findings from a pilot study suggest that coconut oil leads to ketone production and supports neuronal survival, which has huge implications for the treatment of cognitive deficits associated with conditions like Alzheimer’s Disease (Nafar & Mearow. J Alz Dis; 2014: 39(2): 233-237).

Yet another study on the efficacy of coconut as a weight loss supplement found that the MCFAs in virgin coconut oil successfully supported a reduction in waist circumference among study participants (Ming Liau et al. 2011).

The health benefits of coconut oil depend largely on its quality. Schlitz points out that much of existing research on coconut has used hydrogenated oils, from which key components like linoleic acid, a polyunsaturated omega-6 fatty acid, have been removed.

Widely used in food products and for biofuels, production of palm oil has increased dramatically over the last decade, causing severe impacts on tropical biodiversity. As palm plantations spread, valuable rainforests – and the countless rare and endangered species they shelter – are reduced, contributing to major disruptions in ecosystems (Environmental Impact of Biofuels, Bernardes, Ed, 2009).

Other reports reveal a host of grave human rights abuses connected with palm oil production, including debt bondage, human trafficking, and the use of child labor, are commonplace in the palm industry.

It is important to bear in mind that palm oil and coconut oil are two distinct products obtained from two different plant species. Palm oil is derived from the fruit of Elaeis guineensis, commonly called the oil palm, whereas coconut comes from Cocos nucifera, the coconut palm.

Coconut palms are produced on a far smaller scale than oil palms and—at least so far–have not been identified as a source of ecological disruption or human rights violation.

One noteworthy aspect of coconut oil production is the industry’s use of specially trained monkeys to help harvest coconuts. Naturally agile climbers and able to jump easily between trees, monkeys can harvest between five to ten times more coconuts per day than humans can – which is hugely valuable in a work environment that’s risky and dangerous for most people.

Some animal welfare advocates have demanded transparency around the coconut industry’s practices for training, housing, and treatment of its primate workers, so that consumers may make fully informed, conscious choices when purchasing coconut products.

Because coconut oil is stable at high temperatures, it’s excellent for high-heat cooking and baking. It can be substituted for butter, margarine, and other vegetable oils in both sweet and savory recipes. Below are some suggested uses for enjoying coconut oil in everyday recipes:

For highest quality and maximum nutritional value, look for unrefined, virgin coconut oil. For optimal health, incorporate coconut oil along with other healthy fats as part of a balanced diet rich in whole foods. Coconut oil is also a great addition to the medicine cabinet – its countless nutritional and medicinal benefits support health and healing both inside and out.