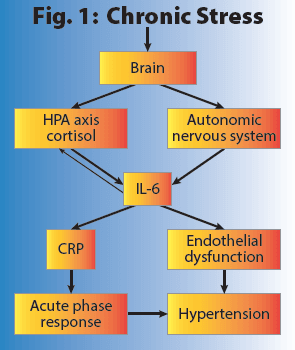 Inflammation is everywhere from our joints to the cover of Time magazine. Clinically, these days, we blame most chronic diseases on inflammation. Yet the ways we diagnose, measure, and monitor diseases associated with inflammation–including heart disease and cancer– have not evolved to a truly clinically useful level.

Let’s start off by looking at the two most commonly used lab measurements for inflammation.

SED RATE (ESR): The erythrocyte sedimentation rate (ESR) determination is one of the first inflammatory markers discovered and utilized clinically. However, the use of the ESR as a screening tool to identify patients who have serious diseases is not supported by the literature. Unfortunately, the ESR is neither sensitive nor specific when used as a general screening test. That’s been known for years, yet many clinicians continue to rely on this test (Saadeh C.. South Med J. 1998. Sox HC Jr, Liang MH. Ann Intern Med. 1986. Smith EM, Samadian S. Br J Hosp Med.1994.

CRP (HS): C-reactive protein (CRP) is produced by the liver in response to stress and inflammation as signaled by the brain to the HPA axis via interleukin 6.  CRP was discovered in 1930 by isolating it from the blood of patients with a particular type of pneumonia. Later research, and the development of a more sensitive version of the test (hs-CRP), showed that CRP-levels could be measured in blood in response to inflammation.

Though hs-CRP is widely used in cardiology, it remains unclear which patient populations really benefit from and should be targeted for hs-CRP measurement (Musunuru K, et al. Nat Clin Pract Cardiovasc Med. 2008). No current consensus exists on when one should measure hs-CRP, and the test is often ordered in conjunction with other tests such as lipid or antibody panels.

It is important to remember that CRP and hs-CRP are general markers of inflammation not necessarily indicators of blood vessel or endothelial inflammation.  Because there are many disparate conditions that can increase CRP and hs-CRP, an elevated level does not indicate a specific disease. Due to its poor sensitivity and low negative predictive value, measurements of hs-CRP cannot be used to rule out disease.

What would help improve our ability to assess inflammation in the context of chronic disease? I think we need to look upstream, at the central nervous system. That, after all, is where a lot of inflammation begins.

The Brain as First Responder

As seen in Fig. 1, the brain is the first responder to both acute and chronic stress, and it is the brain that alerts the HPA axis and triggers the release of cortisol, before the other Il-6 mediated systems kick on. This is why measurements of HPA axis activity have been under study for many years in relation to inflammation-related diseases.

The first thing to consider is that cortisol is a potent anti-inflammatory that functions to mobilize glucose reserves for energy and modulate inflammation. Cortisol also facilitates the consolidation of fear-based memories for future survival and danger-avoidance (aka PTSD).

A short-term cortisol response to stress may actually help relieve physical trauma or emotional pain. But in conditions of chronic stress, prolonged HPA axis activation may intensify cortisol secretion leading to fat storage, ineffective inflammation relief, insomnia, and more. Simply put, a short-term cortisol burst which follows the normal circadian rhythm or close to it may be a healthy response to an insult, but long-term activation can be devastating.

Through the years, there’s been considerable debate about the best method for measuring cortisol. Overall, it appears that saliva measurement, four or more times over the course of a single day (four point), is the simplest and most reliable approach (Vining RF, et al. Ann Clin Biochem. 1983; Rousseau E, et al. PLoS One 2015).

Cortisol has a natural curve which tends to be highest in the morning and lowest at night, so the levels are best checked on waking, just before lunch, just before dinner, and at bedtime (Chan S, Debono M. Ther Adv Endocrinol Metab. 2010).

A Role for Neurotransmitter Testing?

There’s a theory—and a reasonable one—that as inflammation increases, the amount of oxidative free radicals also increases, and they eventually “spill-over” and disrupt neurotransmitter formation. This suggests that neurotransmitter testing could provide an important window into what’s going on with our chronic disease patients.

Initially, neurotransmitter production increases in response to stressors, but over time inflammation-related free radicals will interrupt

neurotransmitter production, ultimately leading to depletion. Some researchers have suggested that the brain translates immune system activation much as if it were a stressor, and the neurotransmitter levels reflect the severity of the problem (Anisman H. et al. J Psychiatry Neurosci. 2009).

Additionally, GABA acts on both T cells and macrophages to exert anti-inflammatory effects in certain diseases, including diabetes. In fact, GABA receptors have been identified on cells within the Islets of Langerhans within the pancreas (Prud’homme G, et al. J Immunol. 2013). It is apparent that inflammation can inhibit the production of serotonin and GABA,  and consequently the drop in GABA and serotonin impairs the body’s ability to regulate inflammation, creating a feed-forward cycle of disorder.

Excitatory neurotransmitters play a role, too, and it is important to consider them in the context of inflammation.

Epinephrine: Along with cortisol, epinephrine has been found in the urine of patients recently exposed to physical and or emotional trauma (Alvarez-Diduk, Galano A. J Phys Chem 2015).  It actually has a surprisingly strong anti-oxidant effect, and it regenerates easily. It also has a direct down-regulatory effect on the pro-inflammatory activities of neutrophils. This occurs via enhancement of cAMP-mediated clearance of cytosolic Ca(2+)(Tintinger GR, et al. Biochem Pharmacol. 2001).

When elevated, epinephrine is generally associated with recent or short-term trauma.

Glutamate: An elevated level of glutamate can be a response to inflammation. For example, in people with major depression, increased inflammation may lead to a surge of glutamate in the basal ganglia in association with glial dysfunction. However, increased glutamate triggered by other sources, can also cause inflammation in the brain. This has implications for the risk of dementia. which can relate directly to dementia (Haroon E, et al. Molecular Psychiatry. 2016)

Norepinephrine: This may be the most important of all neurotransmitters in the context of inflammation and inflammation-related diseases. Normal levels of norepinephrine suppress the expression of pro-inflammatory cytokines (TNF, IL-1β) and signaling molecules (iNOS), while increasing the expression of anti-inflammatory cytokines (IL-10) and molecules (IkB) (Rommelfanger KS, Weishenker D. Biochem Pharm. 2007.)

Chronic inflammation leads to a depletion of norepinephrine, and a lifting of the brake that it normally exerts on NF- kB and other pro-inflammatory signals.  .

So, what is the best clinical method for assessing neurotransmitters in our patients with chronic stress and inflammation?

Urinary levels of neurotransmitters primarily reflect the activity of the peripheral and enteric nervous systems, allowing for measurement of not only brain activity and its role in inflammation, but also the whole body’s inflammatory process.

Simply put, oxidation and inflammation are both mediated by and reflected by the brain, the peripheral, and the central nervous systems. The HPA axis is the key link. Clinically, accurate assessment of inflammation can most easily be obtained via urine test technologies.

Next time you are concerned about a patient’s inflammation, just check in with his/her brain. Very likely, it will tell you a lot of important things.