Challenged by MS, the “Spice-Trekkers” Discover Their Own Culinary Medicine

Philippe de Vienne is an explorer by nature. He and his wife Ethné travel the world, sourcing organic spices and herbs where they’re grown. That’s their job as the owners of 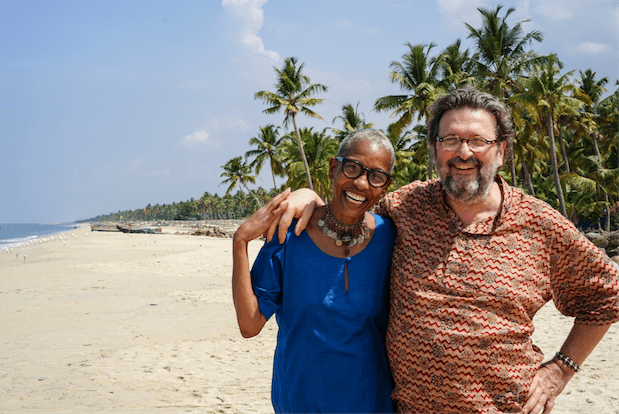 It’s also their passion–offering customers the flavors of the world, from Moroccan mint to Jamaican allspice. Ultimately, it became their medicine.

“There was nothing the doctor could do,” recalls Ethné. “No pill, no treatment, no therapy. ‘There’s is nothing. We’re so sorry. Goodbye.’”

Philippe, then 59, wasn’t about to accept that. “There had to be something I could do,” he says. So instead of exploring new countries and cuisines, “I went down the rabbit hole,” surfing the internet for medical information. “Tibetan medicine, Chinese medicine, pyramid power, all the MS sites saying, ‘Give us money, give us money’ and all studies that have ever been done.”

He became a lay expert on MS, learning about myelin, the fatty sheath insulating nerves and aiding the connection between them. He learned about mitochondria, ATP, and energy transfer within cells. MS creates inflammation, damaging the body’s myelin and mitochondria. It creates systemic breakdown. The de Viennes soon learned more than they’d ever hoped to know about the physiology of MS.

Understanding the disease, however, is not the same as curing it. And on that front, mainstream medicine had little to offer.

“She is a public figure,” complete with TEDx talk, seminars, bestselling books and a devout following of 90,000 “Wahls Warriors.” There’s good reason for the adulation: Wahls—an internist by training—has reversed her own MS, and has helped hundreds of patients to do the same.

And she did it primarily through dietary and lifestyle changes, augmented by judiciously targeted dietary supplements.

Her self-curated version of the paleo diet features 9 daily cups of vegetables and fruit, along with healthy fats like coconut and olive oil and some wild fish, grass-fed meats, and a lot of liver.

According to Dr. Wahls, it works by reducing inflammation, so the body’s cellular connections are no longer impaired. It uses food, not supplements to feed the mitochondria the nutrients they need, including vitamin D and coenzyme Q, they need. Over time, this regimen, known as the Wahls Protocol diet, took her from wheelchair-bound to bicycling up to 18 miles a day.

True to his nature, he took the hard-core approach. “I went cold turkey on the diet. I gave up everything.” By “everything,” he means all the foods that promote inflammation. “The usual suspects — gluten, dairy, processed oils and sugars.” Wahls also recommends starting out eliminating processed foods, beans, grains and nightshade vegetables including potatoes, eggplant, peppers and tomatoes (not all studies agree on this issue). 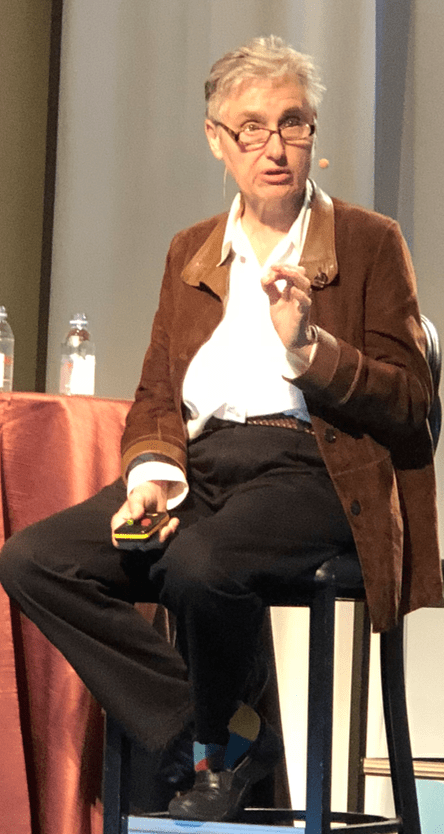 He also had to abandon a number of favorite cooking techniques: deep-frying, grilling, caramelizing.

That wasn’t easy for a professional chef and self-professed gourmand who once delighted in breads, pastas, and soy sauce saturated Asian fare.

But Philippe and Ethné were determined to resume their active spice-trekking lives, and they were convinced that with their culinary skills and knowledge of spice combinations, they could reinvent their favorite family fare—and create new favorites—in a way that was simultaneously pleasurable and restorative of Philippe’s health.

Philippe went a step further, throwing out his cholesterol and blood pressure medication. “I had nothing to lose.”

He could feel the results after five weeks. His pain decreased, his stamina increased. And over time, he lost 70 pounds—“and never felt hungry.”

Ethné could see the impact. Ultimately, so could his physician. After a new round of tests, his doctor called on a Sunday night — usually not a good sign. All the tests had come out normal and in some cases, “excellent — for a man 10 years younger. My doctor said, ‘Tell me about this crazy diet,’” says Philippe. “People have to know about this.”

As Philippe’s strength and dexterity returned and his brain fog diminished, he grew ever more innovative in the kitchen. He used Épices de Cru herbs and spices to enhance, enrich and embellish his nine cups of vegetables. Family meals became fun again, as well as healthy.

“We were diving into the food,” says Ethné. “When I saw him taking that diet to the place where he used to be before in terms of tastes and flavor profiles, I said, ‘He’s coming back.’”

She also knew she had to share the benefits of their discoveries with other people who are struggling to restore their health—especially people with serious degenerative diseases like MS.

“If someone had told us when we left the doctor’s office that we could try something, I would have been so happy and so relieved and so excited.”

To that end, the de Viennes have published a cookbook—their fourth—entitled: The Spice Trekkers Cook at Home. Lavishly illustrated and packed with paleo-licious recipes, the book is a cornucopia of inspiration and hard-won knowledge on how to truly use food as medicine.

The book explains basic cooking techniques, like braising and sautéing and shows how to use them to create globally-inspired recipes like Squash, Fennel & Celery Root Tian from Provence; Mixed Vegetable Gulai from Sumatra; Lamb, Raisin and Cauliflower Tajine from Morocco; and turmeric-infused Indian Style Pan-Fried Mackerel.

There are instructions for home-made Kimchee and other fermented veggies, tips on creating hot and cold sauces, practical hacks for kitchen organization and plenty of suggestions for how to tastefully replace unhealthy ingredients with beneficial alternatives.

Each recipe offers variations on a theme, inviting readers to experiment, or even better, to develop their own favorites.

Mealtime is, and always was, a pleasurable family experience in the de Vienne household, and the couple wants readers to enjoy not only the recipes, but also the culinary process itself, and to take a more intuitive approach in the kitchen.

The Spice Trekkers Cook At Home is a sensory delight as soon as it is opened, seeing as it comes boxed with 28 spices and herbs. The little tins of Smoked Paprika, Mauritian 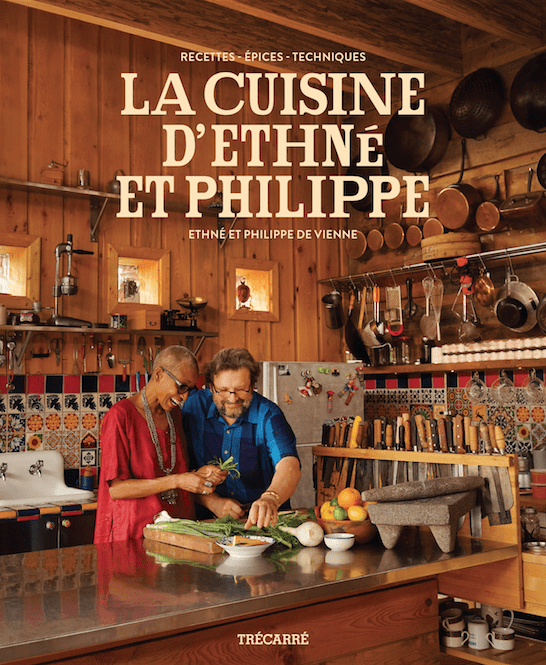 Masala, Curry Leaves, Turkish Sage, Herbes de Provence, and the like are sure to intrigue and engage even the most kitchen-wary individuals.

The Spice Trekkers Cook At Home was Ethné’s idea. The couples’ previous cookbooks focus on the spices themselves and the people who grow them. This book, though, revealing Philippe’s struggle with MS, is their most personal and yet, he says, the most selfless, stressing how the right foods can heal and delight at the same time.

The first rule in the de Viennes’ book is to cook for yourself. It’s almost a must on the Wahls Protocol. Cooking is happy habit for the couple, who routinely make dinner to share with extended family and friends. But they both recognize that for others–especially those impaired by illness–cooking is daunting.

“We’re well aware of that,” says Philippe. Demystifying the process has been their goal since opening their spice and tea store in 2004. As Ethné says, “Cooking doesn’t require a PhD and you don’t have to cut like that guy on the TV show.”

The Wahls diet—and the de Viennes’ extensions of it– “is a reasonable idea,” says the MS Society’s Dr. LaRocca. But he cautions that in his decades of work, he’s seen more than a few reasonable ideas that ultimately don’t test out.

“What’s the scientific reality? How is it going to help? If you don’t test this, if you don’t study this, you’re never going to know.”

After years of outright nay-saying, the Multiple Sclerosis Society has recently agreed to put the Wahls Protocol to the test. They’ve funded a study at the University of Iowa where Dr. Wahls works, comparing her protocol with the Swank Diet, a low saturated fat regimen that had been the go-to mainstream diet for MS symptom management for half a century.

The study’s primary endpoint is the amelioration of fatigue, “one of the most common symptoms of Multiple Sclerosis and one of the most destructive,” says Dr. LaRocca.

The final analysis of the study is still years away. But the de Viennes, like many families confronting serious chronic diseases, say, Why wait?

“What is wrong with trying it? Just for a month. What harm is there in a hypernutritious diet?” It certainly seems to have worked for Philippe, who five years since being diagnosed with MS, is back to his globe-trekking ways.

He’s still an avid Wahls advocate but has relaxed some of his original dietary restrictions. Several of the recipes in The Spice Trekker Cook at Home feature nightshade vegetables. And Philippe likes to unwind after work with a glass of wine. “That and cooking together, sitting down and sharing your food,” he says. “That’s the biggest stress reducer in my life.” 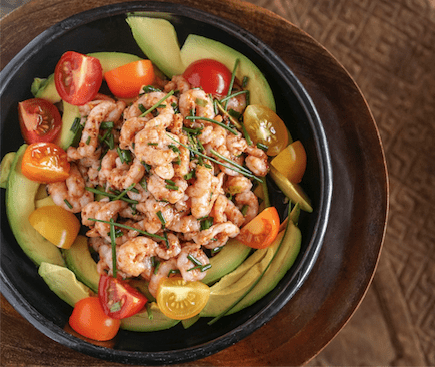 Mix all dressing ingredients in a bowl. If using thawed shrimp, dry them on a paper towel for a few minutes before gently incorporating them into the dressing. Then, peel and slice avocados. Place them on a dish. Place the shrimp salad on top of the avocados. Decorate with tomatoes and lemon