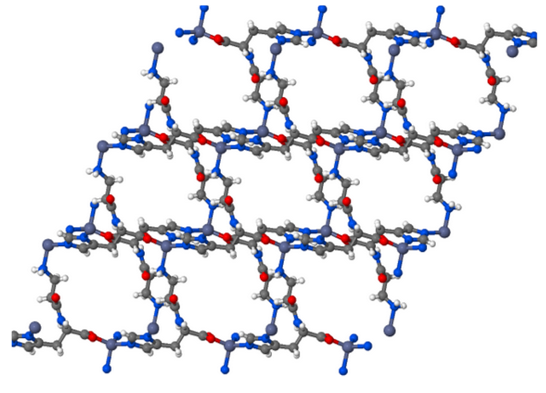 Zinc carnosine is a peptide-based metal organic framework made up of tetrahedral zinc nodes and carnosine linkers. It has a long history of use in Japan to prevent and treat peptic ulcers. More recently, it has been shown to attenuate the odds of oral mucositis in cancer patients undergoing chemo and radiation therapy. Image courtesy ChemTube 3D

Oral administration of polaprezinc (zinc L-carnosine) can prevent oral mucositis in cancer patients undergoing radiation or high-dose chemotherapy, according to a series of studies from researchers in Japan. The compound may also be useful in preventing or minimizing more common oral lesions like canker sores.

Investigators at Gifu University Hospital pre-treated 47 patients undergoing high dose chemotherapy prior to hematopoietic stem cell transplantation with polaprezinc in either lozenge (N=16) or alginate solution form (N=31). All patients had some form of leukemia or lymphoma.

The researchers compared the incidence of oral mucositis among the polaprezinc-treated patients with a cohort of 19 similar patients who received no premedication.

The difference was striking.

This translated directly into a marked reduction in the need for analgesics to attenuate mucositis-related pain. Among the controls, 89% were using some type of non-opioid pain-relief drug or local anesthetic. Among the polaprezinc patients, the figures were 16% for the solution, and 13% for the lozenge.

“Polaprezinc lozenge is a solid portable dosage form and can be easily and safely taken without water. Thus, it is highly probable that the present lozenge preparation is applicable not only to hospitalized patients but also to those in the ambulatory chemotherapy setting.”

Several years earlier, the Gifu group had compared polaprezinc solution against an azuline gargle in a cohort of 36 patients with hematological malignancies undergoing high-dose chemo and radiation therapy. The zinc preparation significantly reduced moderate to severe oral mucositis (20% vs. 82%), as well as the need for analgesics (Hayashi, H. et al. Anticancer Research. 2014; 34(12): 7271-7277).

Zinc L-carnosine appears to be protective against radiation-induced mucositis as well. In a cohort of patients with head and neck cancers, the Gifu group saw a three-fold lower rate of severe mucositis among those using the polaprezinc oral solution prior to and during radiation (16.5% vs. 52%). The zinc treatment also reduced the median duration of radiotherapy and median time to hospital discharge by roughly 40% (Suzuki, A. et al. Head Neck. 2016; 38(9): 1387-1392).

Oral mucositis is one of the most common side effects of cancer treatment, and often one of the most debilitating. It occurs in up to 40% of patients on standard chemotherapy, and in 80% of those on high-dose regimens. Among people requiring radiation treatment for head and neck cancers, the incidence is over 80%.

The consequences of severe mucositis can be dire. Patients find it difficult to eat, putting them at high risk for malnutrition. For many, it is a primary reason for cessation of treatment or sub-optimal chemotherapy dose adjustments.

As Hayashi and colleagues point out, “oral mucositis has a negative impact on the healthcare economy requiring costs of care associated with hospitalization, medical management, nutritional support, and management of secondary infections.”

Oral zinc L-carnosine appears to be a safe and simple modality for averting this very common complication.

The mechanisms by which chemo and radiotherapies induce mucositis are not entirely clear, but the surge of oxygen free radicals and inflammatory cytokines (TNF-α, ΙL-6) associated with these treatments likely plays a role.

Zinc L-carnosine, used as a drug to treat peptic ulcers in Japan, and available as a dietary supplement in the US, has notable anti-oxidant properties, which may contribute to the observed protective effects.

Anecdotally, there are some reports that zinc L-carnosine lozenges can ameliorate canker sores and other oral irritations such as those caused by braces, retainers, or other dental appliances. These observations await confirmation from clinical studies.

Zinc L-carnosine lozenges based on the original Japanese formulation recently became available as a dietary supplement in the US, under the brand name, OraSwift.