Clinicians and researchers have long recognized that women have 2-3 times greater risk of developing rheumatoid arthritis than do men, a fact most have attributed to the influence of estrogen and progesterone on the immune system. 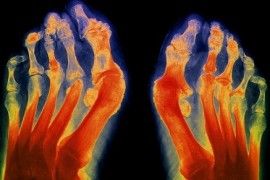 But several new lines of research are prompting a re-think on the issue of gender disparities in this common, costly and debilitating disorder. Genetics, as well as greater thymic activity early in life, appear to play as much of a role as hormones.

The notion that the gender difference could be explained by hormonal causes is certainly reasonable, and is based on the observations that peak incidence of rheumatoid arthritis occurs during menopausal age when estrogen production drops, and that in many women with earlier-onset disease, symptoms tend to improve during pregnancy when estrogen is high.

In recent years, other equally plausible explanations have begun to emerge. Rita Baron-Faust, MPH, a writer for UBM Medica’s Rheumatology Network website, recently posted an excellent review of the science on this rapidly evolving subject.

She notes that two years ago, arthritis researchers at the University of Manchester identified 14 RA-linked genes that are specific to the X chromosome (Eyre S, et al. Nature Genetics (2012) 44:1336–1340). While males may be carriers of these genes, women—owing to their XX genotype—get a double whammy in terms of genetic susceptibility.

A mouse experiment in which researchers transferred X chromosomes from female mice into males showed that despite the animal’s birth gender, transfer of the X chromosomes conferred greater likelihood of expressing rheumatoid disease patterns, and greater levels of associated organ damage. This still to be published study, by Singh and colleagues at the UCLA School of Medicine was presented at the 2013 annual meeting of the American College of Rheumatology.

Environmental factors also contribute the gender variance story. Several recent studies have suggested that exposure to toxins in hair dyes, nail polish and other cosmetics may play a role, though the data so far are variable and inconclusive.

Eric Gershwin, MD, Chief of Rheumatology at UC-Davis, believes that inherent gender differences in immune system function can account for much of the gender disparity in RA incidence.

For one thing, females are born with more active thymus glands, and their T-cell responses tend to be more robust than males’, as was shown 10 years ago by Fagan & Faustman (Fagan TF, Faustman DL. Advances in Molecular and Cell Biology (2004) 34:295–306).

Dr. Gershwin contends that womens’ more active immune systems, though conferring an advantage in terms of improving survival from infectious diseases early in life, also predispose women to autoimmune disorders like RA as they get older.