While many Americans suffer from a complete lack of exercise, others are pushing the 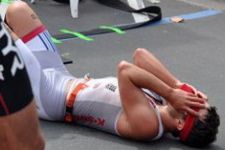 opposite extreme, and the consequences can be just as dire.

When it comes to endurance exercise, too much of a good thing can be very bad, said Jim LaValle, RPh, CCN, speaking at the Institute for Functional Medicine’s recent international symposium.

A nationally recognized nutrition and fitness expert, Mr. LaValle explained that triathlon is now the fastest growing sport in the US. People in their 40s make up the largest segment of new triathletes. Other endurance sports are also popular Many mid-life marathoners go at it with little formal training or understanding of how intense exertion affects physiology. The results can be anything but healthy.

Joint strain and muscle tears are the least of the troubles. Over the long term, endurance athletes may be increasing their cardiovascular risk, dysregulating their GI systems, damaging their kidneys, inducing osteopenia, and profoundly altering their endocrine systems. They may look “healthy” because they are muscular and lean, but in reality many endurance athletes are not.

There are now well over 4300 amateur triathlons—which combine long distance running, cycling and swimming–in the US every year. Large events routinely register tens of thousands of competitors. USA Triathlon, an amateur membership organization, boasts over 150,000 members, up from 21,000 in the year 2000, a change that underscores the explosive growth of the sport over the last decade

On the one hand, this is an encouraging trend in the Land of the Couch Potato, where well over 30% of the population is overweight. Many mid-life athletes are motivated to participate in triathlons, marathons, long-distance bike races and other endurance sports by a desire to maintain or regain health and vigor.

Mr. LaValle, himself a life-long, high-performance athlete, said that physicians should by all means encourage their patients to exercise and become fit. But he stressed that people should not be participating in serious endurance events without proper training and guidance from a qualified coach, exercise physiologist or someone with a lot of experience in the field.

What many people fail to understand is that any sort of prolonged, intense exertion is a significant stress on the body. It can be a “good” stress, in the sense that the body is designed for exertion, but constant, intense training and high-pressure competitive situations can and do take their toll if one is not careful.

“Racing can temporarily increase cardiovascular event risk by 7 times,” he told the IFM audience, in a luncheon session sponsored by Thorne Research.

Chronic, cortisol-induced GI damage can increase the risk of endotoxemia, as GI mucosal integrity is compromised by ischemia. Intense, prolonged exertion of any kind can induce endotoxemia as lipopolysaccharide toxins from intestinal bacteria pass through the damaged intestinal wall and into the blood.

Researchers have shown that blood endotoxin levels are higher among athletes who require medical attention during events compared with those who do not. (Moore GE, et al. Med Sci Sports Exerc. 1995 Sep;27(9):1238-42).

Exercise induced cortisol elevations can also deplete bone mineral density, and as a result, many endurance athletes slowly become osteopenic. It also depletes testosterone, and it is interesting to note that many long distance cyclists and marathon runners have low testosterone. The impact of chronically elevated cortisol on testosterone is direct, but it is further compounded by the fact that cortisol elevation depletes magnesium, which also reduces testosterone, explained Mr. LaValle, who directs the LaValle Metabolic Institute, Cincinnati.

Use of ibuprofen and other non-steroidal anti-inflammatory drugs—which many endurance athletes take by the handfuls—only compound the problems. These medications may provide short-term relief from the inevitable wear and tear on muscles and joints, but because they cause GI damage, they will worsen the risk of endotoxemia. They are also potentially damaging to the liver and the kidneys, which are already being stressed by the exertion itself.

Worse still, some athletes think they can pre-empt pain by loading up on ibuprofen prior to training or competing. In reality, this will only increase the risk of serious endotoxemia. It’s a very bad idea, Mr. LaValle stressed.

Endurance exercise can be done safely, and can be quite healthful if undertaken with care. People who wish to compete need good training, and also need to have realistic goals: people in their 40s or 50s who are determined to prove they can perform like people in their 20s are setting themselves up for illness and injury.

Mr. LaValle said there are many nutritional strategies, dietary supplements and natural products that can be safely and effectively used to ameliorate the adverse impact of intense endurance training. Among his preferred natural tools are: Coenzyme Q10, which can markedly improve muscle function and reduce inflammation; Curcumin (turmeric) which contains a host of natural anti-inflammatory compounds; and Magnesium, which is among a number of important minerals and electrolytes that get depleted through exertion.

Nutritional strategies and supplement protocols need to be individualized, and there’s no simple “one-size” regimen that will help everyone. The main point, he said, is that doctors need to be alert for the potential ill-effects of intensive exercise among their patients.

The goal should never be to discourage physical activity. Rather it should be to make athletically-inclined patients aware that intense exercise is a high-stress state, to see to it that they get good training, and to help them minimize risk to the greatest possible extent.