“In 1974, we were on a hike with Dr. Bastyr at the foot of Mt Ranier, and he was showing us plants. The week before, the Washington State supreme court had just decided that naturopaths did not have the right to diagnose or treat disease. And the state attorney general said anything used to treat a disease is by definition, a drug.

I asked Dr. Bastyr if there was a future for this medicine.

“He said, paraphrasing Shakespeare’s Merchant of Venice, “No matter the obstacles they place, the truth of our medicine will win out,” Joe Pizzorno says, reflecting on his mentor, and the man for 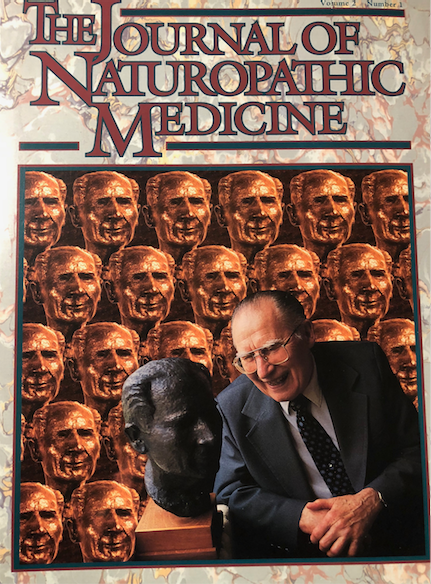 whom he named the medical school he founded.

“Dr. Bastyr was a true a physician-healer.  And he was always learning,” Pizzorno told Holistic Primary Care. “He would say to us, ‘When you get out into practice make sure you read a research study, or something about herbs, or something new about medicine every night before you go to bed. Always keep learning, always keep improving. And always touch your patients. Let them know you care.”

Bastyr was born in 1912 to a family with Czech-Bohemian roots. His father, a pharmacist and his mother, a lay herbalist, migrated westward from Minnesota first to North Dakota, and then later to Washington, settling in Seattle.

In a rare 1989 interview, Bastyr said that much of his early learning about medicine came from watching his mother, but also from working with his father who more than a few times caught prescribing errors made by prescribing MDs. Some of those catches proved to be life-saving.

As a young man, he opted for training at a school called the Drugless Institute, and later studied homeopathy with an old-time practitioner named C. P. Bryant. Bastyr also learned a lot of physical manipulation techniques that he incorporated into his practice. He also learned to deliver babies—roughly 1,500 of them over the course of his long career, says Pizzorno.

Cathy Rogers, ND, who in the early 1970s studied with Dr. Bastyr at National College of Naturopathic Medicine, and who later served as the Dean of Admissions at Bastyr University in the early ‘80s, said that it was his influence that kindled her wish to be a naturopathic physician.

She was already interested in herbs and other self-healing modalities. “I met this gal in my herb class who told me about Dr. Bastyr’s teaching. So found out about the school, and I went over and sat in on Dr. Bastyr’s herbal med class. He was close to 6 ft tall, a very gentle presence. He’d say, “This little herb…” and he’d describe where it likes to grow, what it is used for, how it behaves. I just had this huge reaction.

“These old naturopaths knew all there was to know about anatomy and physiology, everything a conventional MD knew, but the treatments were so different, their knowledge of herbs, food, water….it was so connected. I’d never thought of wanting to be a doctor. That was never attraction. But THIS kind of doctor…I got the picture of what it could be.”

While, Rogers was in naturopathic school, she was also working at Seattle Children’s Hospital, coordinating a multi-use pediatric clinic. “I met a lot of doctors there, and I never told anybody I was in naturo school.” Her familiarity with conventional medical systems and mainstream practitioners served her well once she joined the administrative team for the newly minted John Bastyr College of Medicine, as the school was originally known.

She points out that Dr. Bastyr himself, being a rather humble man, “was not thrilled that Joe wanted to name a school after him. He was a one-on-one guy in terms of training students. Though he taught at the school that bore his name, Bastyr was never directly involved in management, preferring to focus his time and energy on patient care and on teaching.

He also cherished his time outdoors, foraging for herbs. He and his wife, Aletha, lived on a farm in Kent, WA, where they grew apples, pears, nectarines, and berries and raised goats.

Like all practitioners of non-orthodox, non-allopathic medicine, Bastyr experienced his fair share of ostracism and vilification by mainstream medical authorities. To this day, he—like the naturopathic profession as a whole—is still considered a “fraud” by the Quackbusters crowd.

But if mainstream organized medicine was against Bastyr, most mainstream medical practitioners in the Seattle area were not, recalls Pizzorno.

“He actually did a residency at Grace Hospital, and collaborated with MDs.” He maintained close ties with conventional allopathic practitioners throughout his 60-year career.

“He was just so confident,” Pizzorno says. “He got all the referrals for cases that others couldn’t cure.”