Is Neuro-Regeneration a Reality? 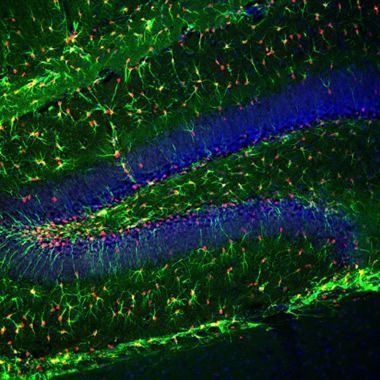 New research indicates that in many parts of the brain, new neuronal growth is possible during adulthood, but held in check by Astrocytes. This inhibition is actually reversible, opening the possibility that neuroregeneration can be induced well into adulthood. (Image of Astrocytes (green) and the inhibitory molecule thymidine kinase (red) in mouse brain courtesy of Jason Snyder, University of British Columbia)

For generations, the prevailing medical wisdom has been that neurodegeneration is irreversible, and that adults simply cannot re-grow lost or damaged neurons.

It turns out that prevailing medical wisdom may be wrong.

“Is there a repair mechanism? We used to think there wasn’t. Fuad Lechin and others said there was. It turns out he was right. Its called adult neurogenesis—the production of new neurons in an adult brain,” said Andrew Heyman, MD, program director of Integrative & Metabolic Medicine at George Washington University.

Beginning in the 1970s, Lechin, a Venezuelan physician and Nobel-nominated physiologist, published a seminal series of works describing the inter-relationship between the nervous system and the immune system in the context of autoimmune disease.

His assertion that the brain could repair itself, given the right conditions, is being borne out by a recent wave of research, says Dr. Heyman.

Speaking at the Functional Forum, a monthly meet-up of holistically minded clinicians in NYC, Dr. Heyman stressed that this is very good news, given the rising prevalence of Alzheimer’s, Parkinson’s, PTSD, Traumatic Brain Injury and other neurodegenerative diseases currently thought to be non-reversible.

The best part is that many of the nutritional and lifestyle-based interventions that reduce cardiometabolic risk will also promote neurogenesis.

Researchers have long known that in humans and other mammals, adult neurogenesis occurs in only a few very specific brain regions like the olfactory bulb, where epithelial cells and their associated neurons are constantly being replaced.

Neural Stem/Progenitor Cells (NPCs) have been identified throughout the central nervous system, but in most brain regions they seem unable to form new neurons, giving rise to the widely held belief that for all intents and purposes, neurogenesis stops after adolescence.

More recently, investigators have discovered that in the “non-neurogenerative” brain regions, NPCs are actively repressed. Many researchers believe this is mediated by the local astrocyte populations, and that the inhibition of neurogenesis might be mutable.

A lot of research attention has been focused on the hippocampus, one of the more neurogenically active parts of the brain. This line of research is clinically important because the hippocampus is highly vulnerable to oxidative damage and the pernicious effects of long-term stress, Dr. Heyman explained.

The question is whether a damaged hippocampus can be coaxed into rebuilding itself.

Early on in the stress response curve, the hippocampus swells. Over time as stress becomes chronic, the constant barrage of adrenalin causes significant neuronal death and the hippocampus shrivels. These changes are visible on functional MRI.

“The brain recognizes the functional and architectural changes in the hippocampus, and it will downregulate the cortisol response to protect itself. That’s why you start to see diminished cortisol output and blunting of stress response in conditions of intense chronic stress.”

The hippocampus is responsible for transforming short-term memory into long-term memory, and for assigning emotional “weight” and importance to stored memories. Damage to the hippocampus accounts, at least in part, for the memory problems associated with stress-related as well as age-related neurodegenerative diseases.

Fortunately, this hippocampal diminution does appear reversible. The regenerative process begins when radial glia-like stem cells insert themselves into the CA3 region in the hippocampus, followed by infiltration of NPCs, and regrowth of new nerve cells. These then undergo differentiation, migration, and finally synaptic integration. Under the right conditions, the process is fairly quick, taking between 2-4 weeks.

One of a large family of bioactive ginsenoside compounds found in Panax ginseng, Rg3 appears to be particularly effective at protecting the brain from oxidative damage and also at inducing neurogenesis.

Taken as an oral supplement or a specially compounded nasal spray, Rg3 decreases excitotoxic and oxidative stress within the brain, leading to enhanced memory effects and clearing of the “brain fog” associated with so many chronic autoimmune disorders.

At GWU, Dr. Heyman is studying the use of Rg3 in combat veterans returning with traumatic brain injury and PTSD.

“When you image their brains, you see they’re all damaged,” he said. The goal is to see whether oral Rg3, at 5 mg twice daily, on an empty stomach, can mediate and reverse this damage. The veterans are taking the supplement in cycles of three months on, two weeks off.

He is also testing the ginseng-derived compound on Le Mans racing drivers. As a team physician for the Corvette Racing Team, Dr. Heyman is taking care of world-class, high-performance racers who must drive at average speeds of over 130 mph for up to 4 hours at a time.

“Rg3 spray nasal allows them to be more calm in the face of stress, more competent, and precise in their driving.”

Benefits Beyond the Brain

Beyond Rg3, there are other ginsenosides that have neuroregenerative or neuroprotective effects, as well as benefits beyond the brain.

Investigators at the Brain Sciences Institute of Swinburne University, Melbourne, looked at oral supplementation with Cereboost, a proprietary extract of Panax quinquefolius produced by Naturex. At doses of 100, 200 and 400 mg, the product improved working memory, reaction time and decision making processes, as well as increased calmness, even at the lowest dose (Scholey A, et al. Psychopharmacol (Berl). 2010; 212(3): 345-356).

A team at the Chinese Academy of Medical Sciences, Beijing, suggested that Rg1, another ginsenoside, could reverse learning impairments induced by scopolamine, at least in animals. An orthopedics research team at Xijing Hospital, Xi’an China, reported that Rg1 promotes peripheral nerve regeneration in a crush-injury rat model. 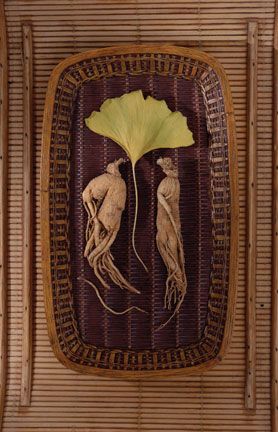 The other emerging story on the neurogenesis front is nicotinamide riboside (NR), a form of niacin found in dairy.

NR is “the “it” molecule right now in neuroimmunology.” A number of research groups worldwide have shown evidence of neuro-repair in Alzheimer’s and Parkinson’s pathology in both animal and human models. The current literature on NR and NAD in the context of slowing the aging process is well-summarized in a very recent review by Imai and Guarente in Trends in Cell Biology.

The authors note that, “NAD+ levels decline during the aging process and may be an Achilles’ heel, causing defects in nuclear and mitochondrial functions and resulting in many age-associated pathologies. Restoring NAD+ by supplementing NAD+ intermediates can dramatically ameliorate these age-associated functional defects, counteracting many diseases of aging, including neurodegenerative diseases.”

Commercially available as a product called Niagen (Chromadex Inc), NR is typically given as an oral supplement at doses of 250 – 500 mg daily.

Like Rg3, NR can also be used intranasally or sublingually. Dr. Heyman, who has no financial involvement with any producers of NR or Rg3, said he has been experimenting with a compounded nasal spray that combines both Rg3 and NR.
“I’m giving it to patients with PTSD, Alzheimer’s disease, chronic stress, and lyme patients. It is a fabulous tool to begin the CNS repair process.”