Chronic inflammatory conditions are among the biggest challenges a holistic practitioner faces. Even when patients are very compliant with dietary and lifestyle changes and take all the recommended supplements and medications, inflammation is often stubbornly persistent.

We know now that resolving inflammation is not a passive process. Rather it is complex and highly active, and it happens slowly. Sometimes it even stalls. Inflammation can linger long after the acute phase of the injury or illness has passed. Without resolution, the body never truly returns to homeostasis—inflammation becomes chronic.

Specialized pro-resolving mediators, or SPMs, represent a portion of the omega-3 fatty acid spectrum that has a powerful effect on reducing inflammation. As such, SPMs present us with an important new tool for regulating the inflammatory response in our patients.

SPMs resolve inflammation very effectively, without compromising the immune response, and without risky side effects.

SPMs, which represent a super family of naturally occurring lipid mediators, play a crucial role in switching off the inflammatory response.

SPMs do not block the initial inflammation phase. After all, inflammation is a desirable and natural response to injury and illness. Instead, when the immune response has served its purpose, SPMs down-regulate the process to resolve the inflammation.

The SPMs known as lipoxins, resolvins, protectins, and maresins, are derived from arachidonic acid and omega-3 fatty acids, as shown in Fig. 1.

Arachidonic acid is often portrayed as an undesirable pro-inflammatory metabolite of omega-6 fatty acid. But it is important to understand that in many other aspects of immune system function, both push and pull have their place.

What SPMs do, in effect, is signal the immune system to stop actively responding to pro-inflammatory signals, and instead to accelerate the return to homeostasis. SPMs play a unique role in helping the body to shut down the immune response, inhibit additional inflammation, clear away the damaging byproducts of inflammation, and aid in tissue remodeling.

SPMs can facilitate the resolution even of prolonged or chronic inflammation. And once the SPMs have done their job, the body naturally breaks them down and eliminates them.

The Limits of SPM Production

Two SPMs that have been carefully studied and shown to have therapeutic value are known as 17-HDHA and 18-HEPE.

Unfortunately, this complex conversion process is slow and inefficient, even in the healthiest individuals. Normal genetic variation means that some people will convert even more slowly than average (Fig. 3) 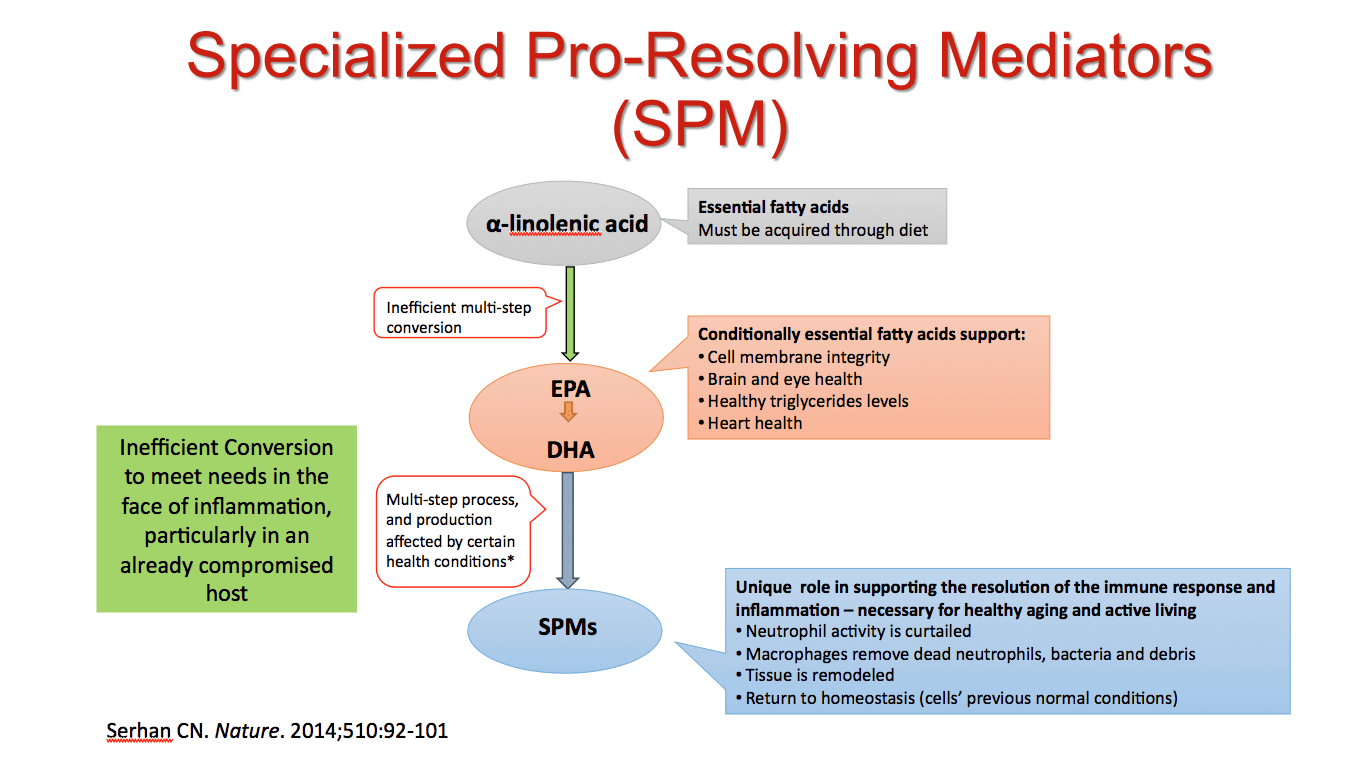 Optimal SPM production is highly dependent on both genetic predispositions and on good nutrition and a healthy lifestyle. But even in the best of circumstances, these fundamental factors aren’t always sufficient to help an individual naturally produce enough endogenous SPMs to overcome and resolve an inflammatory condition. Factors that can limit SPMs production include:

While lifestyle and dietary changes can help improve endogenous SPM production somewhat, they tend not to have large effects. Keep in mind that the aging process continues every moment—and SPM production naturally decreases with age. Simply increasing the intake of fish oil or DHA and EPA even to high levels isn’t sufficient to significantly increase SPMs production.

A more direct and targeted way to raise SPM levels is to supplement with them directly. SPM supplements are now available, made from fish oil using a patented fractionation process to create an SPMs-enriched product. Recent research has shown that daily dosing with two to six soft gels over six weeks can reduce standard blood markers of inflammation such as hs-CRP, interleukins, fibrinogen, and TNF-alpha.

Because SPMs are naturally produced as a normal part of the inflammation resolution process, supplementation with these compounds will not suppress immunity. This makes them much safer than anti-inflammatory drugs such as glucocorticoids, methotrexate or even aspirin. SPMs supplements can be taken indefinitely. They have no known side effects or interactions with other supplements or drugs.

The usual dosing for SPMs is three capsules, two times daily, during the acute inflammation stage. As inflammation becomes subacute, the twice-daily dosage can be reduced from three to two capsules. For patients who experience ongoing mild inflammation, the suggested dosage is two capsules once daily.

The potential clinical uses for SPMs are basically any condition related to chronic inflammation. Research suggests that SPMs can be particularly valuable for people with asthma, arthritis, diabetes, atherosclerosis, and cognitive decline. SPMs have also been used very effectively to treat gut problems, particularly leaky gut syndrome and irritable bowel disease, and to aid recovery in bone and muscle injuries.

I believe SPMs are a valuable addition to the Five Rs protocol used in integrative medicine for healing the gut:

• Replace what was removed with an improved diet; add digestive enzymes and stomach acid.

• Reinoculate the gut with probiotics to restore a better balance of good bacteria.

• Regenerate and repair the damage to the intestinal lining with supplements, including natural anti-inflammatories such as bioavailable curcumin, rosemary, ginger, quercetin, and omega-3 fatty acids.

• Retain the gains with ongoing careful attention to diet and the microbiome.

SPMs are helpful at every stage of the 5 R protocol, but they are particularly useful for regeneration and repair because they reduce inflammation and promote healing.

Clinicians often find that this step can be very slow and discouraging for patients. Symptoms such as bloating and pain continue, even when they are very compliant.

This is where SPMs can make a big difference, by filling the gap in our treatment of inflammation. SPM supplements can give a patient’s immune system the final element it needs to calm the inflammation and move on to homeostasis and healing.

SPMs appear to be a highly effective treatment for preventing bone loss and stimulating bone regeneration. In particular, the resolvins found in SPMs may mediate bone preservation by directly inhibiting osteoclasts.

For treating bone injuries, SPMs may be very helpful by improving bone regeneration and remodeling. For treating osteopenia and osteoporosis, SPMs offer a significant improvement in safety and patient comfort.

Bisphophonate drugs such as alendronate (Fosamax) and ibandronate (Boniva) inhibit osteoclast-mediated bone resorption. However, these drugs can cause dangerous side effects, such as osteonecrosis of the jaw. Selective estrogen receptor modifiers (SERMs) such as raloxifene (Evista) also slow bone loss, but carry a high risk of dangerous blood clots and stroke. SPMs do not appear to generate any of these unwanted effects.

SPMs may also be valuable for treating unresolved inflammation associated with muscle injuries. When inflammation lingers on in damaged muscles, it inhibits tissue repair, which in turn leads to long-term loss of muscle mass and function.

The tightly choreographed inflammatory response to muscle injury can be easily thrown out of step by a wide range of factors, such as re-injury or dietary deficiencies. The final step in resolution isn’t reached and the inflammation continues at a low level, preventing a full return of normal function. Supplementing with SPMs as an injury heals can reduce or eliminate lingering inflammation and speed tissue remodeling.