Is Galectin-3 Inhibition a Key to Reducing Heart Failure?

There are now hundreds of published pre-clinical and observational human studies indicating that Gal-3 is both a predictive biomarker and treatment target in CVD, as well as in other inflammatory and fibrotic conditions (Newlaczyl AU, et al. Cancer Lett, 2011;313(2):123-8).

Equally important is the research showing that a specific botanical derivative—modified citrus pectin (MCP)—can bind to circulating Gal-3 and block its deleterious effects.

That is, indeed, good news because despite the best efforts of conventional allopathic physicians and holistic practitioners alike, CVD is still the number one cause of death worldwide. It accounts for one out of every three deaths in the US annually [Benjamin, E.J., et al, Circulation, 2017;135(10): e146-e603].

To be sure, there have been big advancements. Minimally invasive coronary interventions do save lives. And the broader acceptance of previously “alternative” interventions like anti-inflammatory diets and mind-body exercises can attenuate risk factors for myocardial infarctions, strokes, and heart failure.

But we still have a long way to go.

We need more sophisticated tools to detect and manage CVD, and to prevent deaths from HF

Following an ischemic event, or due to high cardiac workload (e.g. in hypertension) and subsequent tissue damage, the heart undergoes a process of tissue remodeling. Muscle is replaced with non-functional fibrotic tissue. As with fibrotic changes in other organs (e.g. kidney, lung, and liver), fibrosis in the heart ultimately leads to end-stage cardiac failure [Segura, A.M., et al. Heart Fail Rev, 2014;19(2):173-85].

Gal-3 is a versatile bio-molecule, present in cytoplasm, on cell membrane surfaces, and in intercellular connective tissue. It is also present in blood plasma.

Data from the Prevention of REnal and Vascular ENd-stage Disease (PREVEND) study showed that elevated serum Gal-3 correlated with a three-fold increase of all-cause mortality in a cohort of nearly 8,000 general 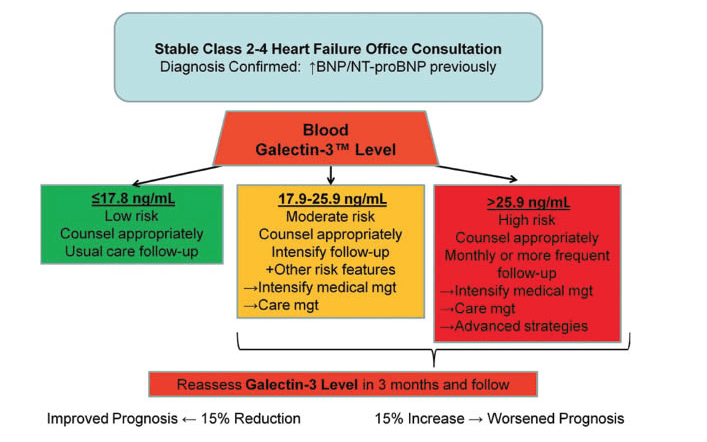 In their 2012 paper, they point out that Gal-3 tends to rise with age. There was also a notable gender disparity: women had higher mean Gal-3 levels than men (11.0 ng/mL vs 10.7 ng/mL). Further, the women showed tighter correlations between Gal-3 levels and cardiovascular risk factors.

Each standard deviation increase in log-transformed Gal-3 was associated with higher odds of having metabolic syndrome.

The Framingham group had previously reported that elevated Gal-3 was associated with increased heart failure and all-cause mortality. But in the present study, after adjusting for standard clinical risk factors, Gal-3 was not an independent stand-alone predictor of heart failure morbidity or mortality.

“Whether Gal‐3 is a mediator of inflammation and cardiometabolic disease remains unclear. Our exploratory analyses show modest correlation with inflammation, and further studies are needed to explore underlying pathways,” the authors wrote.

That said, the Framingham team does see Gal-3 as a potential therapeutic target. “Future investigations should focus on elucidating the mechanisms linking Gal‐3 to cardiometabolic traits and on examining whether modulation of the Gal‐3 pathway might improve cardiometabolic outcomes.”

In a study of 902 patients hospitalized for heart failure, elevated plasma Gal-3 was significantly associated with a higher risk of death from acutely decompensated heart failure. It was also predictive of near-term rehospitalization Patients with Gal-3 levels exceeding 17.8 ng/mL were roughly 3 times more likely than those under that threshold to be readmitted within 120 days of initial discharge [Meijers W.C., et al. Am Heart J. 2014;167(6):853-60.e4].

A Gal-3 serum assay can accurately measure this biomarker, and in 2011 the FDA approved the test for evaluation of chronic heart failure risk and prognosis [de Boer R.A., et al. Ann Med. 2011;43;1:60-8]. The assay is covered by most health insurance plans for heart disease screening, and is available through major laboratories. This inexpensive blood test can also be used to assess risk and progression of metastatic cancer, as well as other inflammatory and fibrotic conditions for which early detection is critical.

Extensive research into the mechanisms and effects of elevated Gal-3, has led to the discovery that modified citrus pectin (MCP) of a specific molecular composition can modulate Gal-3 levels. In fact, MCP is now recognized as the most-researched Gal-3 inhibitor.

Regular citrus pectin is a soluble fiber rich in β-galactoside residues that occurs naturally in the cell walls of fruit peels. It is made up of long-chain polysaccharides. These molecules, however, are too large to be digested and absorbed into the bloodstream. So the benefits of ordinary citrus pectin are limited to the GI tract.

MCP overcomes this limitation with its specific molecular structure and small size.

This polysaccharide fiber-based dietary supplement is derived from the inner white pith of citrus fruit peels such as orange, lemon, and lime. The long pectin fibers are enzymatically shortened with non-GMO pectinases controlled by pH and heat. This enhances absorption into the circulation.

Ordinary unmodified pectin has a molecular weight between 50-200 kilodaltons (kDa); MCP’s molecular weight is down below 15 kDa. These smaller molecules are able to traverse the intestinal lining and enter into the bloodstream, offering multiple systemic benefits (Courts, F.L. PharmaNutrition. 2013;1(1):22–31).

Another modification step called de-esterification decreases the cross-linkages and gelling effects seen with unmodified pectin, and renders the fiber ends more available to bind and inhibit Gal-3. The lower the esterification, the better the MCP’s binding quality. 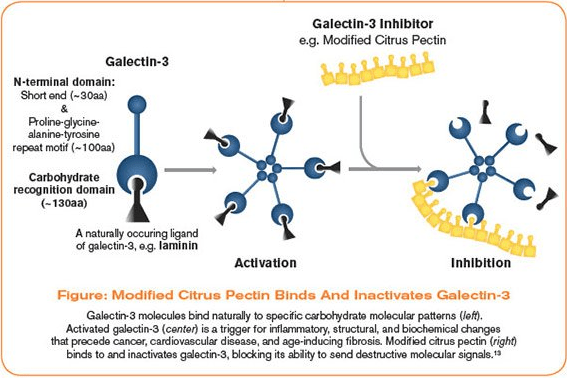 MCP of the correct molecular structure is the only naturally-occuring Gal-3 inhibitor, shown to be safe and well tolerated, with over 40 peer-reviewed publications to date. Multiple studies show that use of this specific form of pectin can slow and even reverse the development of HF.

In pre-clinical animal studies pertinent to human pathologies, the inhibition of Gal-3 by MCP has enabled the identification of the cellular mechanisms by which Gal-3 instigates inflammation and fibrosis in cardiovascular disease [Ibarrola, J., et al. Int J Mol Sci, 2017;18(8)].

Additional studies have emerged demonstrating the unique protective actions of MCP in halting the effects of elevated Gal-3.

Two notable studies were published this year. One was a preclinical study investigating the role of Gal-3 as a modulator of oxidative stress in three distinct models: human cardiac fibroblasts, spontaneously hypertensive rats (SHR), and tissue samples of human aortic stenosis (AS).

This new study is important as it demonstrates for the first time that oxidative stress is another mechanism by which Gal-3 induces cardiac damage. Furthermore, it highlights the role of MCP as a promising intervention to protect the heart via multiple unique mechanisms.

The researchers developed an animal model of diet-induced obesity, using male Wistar rats fed either a high-fat diet (HFD) containing 35% fat, or a standard diet (CT) containing 3.5% fat, for 6 weeks. For the same period, MCP was administered to half the animals in each group, at a dose of 100 mg/kg per day.

The results were significant. Inhibition of Gal-3 by MCP prevented some of the metabolic consequences of obesity by reducing cardiac lipotoxicity. MCP reduced the excessive cardiac accumulation of triglycerides and lysophosphatidylcholine (LPC)–a specific metabolic trait associated with obesity.

The clear majority of research that has been performed on MCP uses a specific form produced with a propriety modification process ensuring correct molecular weight and structure (between 5-15 kDa and <10% esterification). This is the only commercially available, researched natural Gal-3 inhibitor. Experts remind that all “modified” citrus pectin may not have the same effects as the form used in the studies.

While there are not yet any published human clinical trials of MCP as a treatment for CVD, several studies are underway at prominent research institutes, including the Massachusetts General Hospital.

There is certainly a wealth of pre-clinical data to suggest that MCP offers a potentially important new addition to any comprehensive cardiovascular health and treatment protocol.