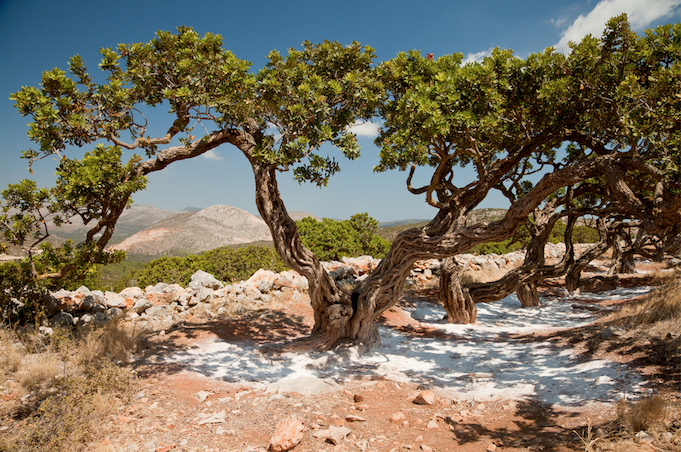 Step off a plane in Greece, and you can’t miss the influence that Chios mastic–the resinous exudate from the plant Pistacia lentiscus var. Chia–has on the culture of that nation.

Liqueur made from “mastiha” as it is called in Greek, is commonly consumed as a digestif, and found on almost every menu in the country. Mastic-flavored candies are available at every corner store. Skin creams, toothpastes, and dietary supplements containing mastiha beckon from pharmacy shelves.

The resin itself is also readily available—as powders, and as “tears” in different sizes, shapes, and gradations of softness—for culinary and medicinal use.

The rest of the world is starting to discover what the Greeks have known for centuries. Last year, world renowned publications and media outlets like National Geographic, The New York Times, and CNN highlighted the health benefits of mastiha–the pride of the island of Chios.

The tradition of Chios mastiha extends far beyond just its culinary and medicinal use; the entire agricultural process of mastiha production has been recognized in recent times as a Protected Designation of Origin (PDO) by the European Union, and by UNESCO as an Intangible Cultural Heritage of Humanity.

Pistacia lentiscus is a hardy, evergreen, resin-producing shrub native to the Mediterranean. It grows well in limestone soils and saline environments, making it more prevalent near the sea. Though it is found from Morocco to Iran, cultivation of P. lentiscus for its medicinal resin has been part of the economic foundation of Chios for centuries, and the island remains the world’s largest source of mastiha.

Over the last 10 years, the volume of research backing the traditional medicinal use of Chios mastic gum has grown substantially. Much of this is due to careful central management of commerce by the Chios Mastiha Grower’s Association, an organization established in 1938 to protect the rights of the island’s mastiha growers.

Given the history of overlords coming in from outside and taking control of Chios and its “Mastihahoria” (mastiha-producing villages), this type of central management by the growers themselves was much needed. It has helped mastiha production and trade to flourish, and also ensures that those who produce the mastic gum will be treated fairly.

There are many stages to mastic production, each integral to the quality of the final product. 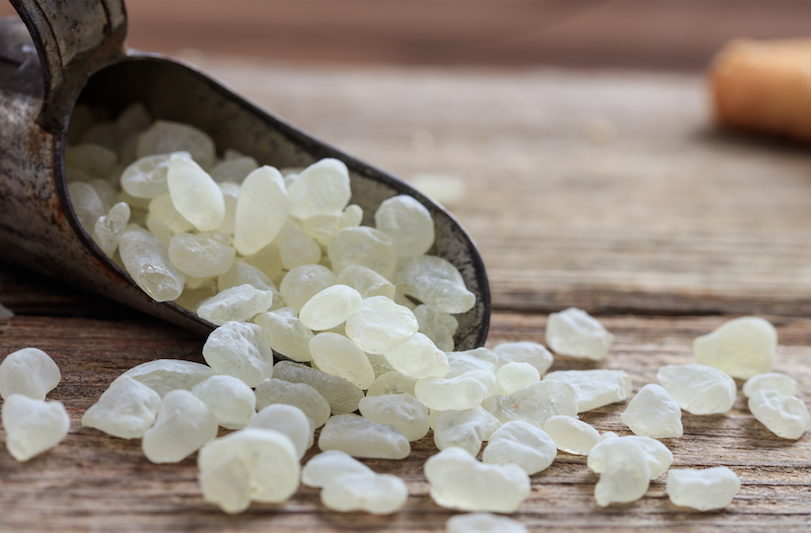 Much like Japanese Bonsai masters who tend their trees with great attention, those who farm the Chios mastiha trees work very closely and diligently with the plants to ensure their vitality and the optimal production of mastic gum.

Cultivators on Chios produce roughly 150,000 kilograms of mastic resin yearly; each shrub only produces approximately 120 to 200 grams. There are many caretakers and loving hands that play a role in maintaining the 1,500,000-plus shrubs found on the island. Work with the shrubs follows a yearly cycle.

In the winter, the only time when Chios typically receives substantial rainfall, the shrubs are considered to be at rest. Yet, much activity occurs around them. In December, growers start the process of top-dressing underneath the shrubs partly with leaves naturally shed to the ground.

Then, in January and February, they prune the branches to a specific shape, which ensures open channels for airflow and light to help dry the mastic resin later in the year when it flows.

In March and April, the growers remove weeds and dig up the ground below the shrubs for renewal. In early summer, they sweep the area under each shrub, forming a clear circular region known as the “table”. This is then covered by calcium carbonate, a white powder that is safe for human consumption. When the resinous tears of mastic fall to the ground, they are naturally coated by the powder, making them easier to see and to collect.

Next, comes the process known as kentos, the carving of small grooves or “wounds” from which the mastic resin flows. Using special iron tools known as kentitiri, workers make these wounds, typically beginning in late July through early September, depending on seasonal conditions. The older the tree, the more resin it tends to produce.

The cuts on the trunk and lower branches must be made with care such that the plant is not damaged. In the larger, older trees, up to 100 of these 2 to 3-inch grooves may be made, twice weekly. Of all the stages in production, this process has the greatest potential to cause damage. It must be done very carefully by those with vast experience in caring for these trees. 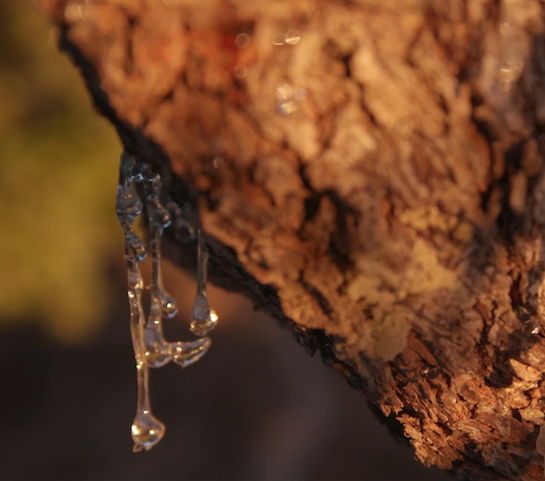 “I am a tireless, always tearful tree” – so goes a traditional song about mastic, known as Skiniatikos.

The mastiha tears flow as long as the wounds are being made. They drip to the ground below, where the sunlight and summer island breezes help to dry them.

After the tears solidify, workers collect them using a special tool known as timitiri. It resembles a small, triangular-headed spoon, and it is used to scrape the tears from the ground. Then, using a special brush with tines like a rake, they loosen the resin that has dried on the tree. It falls to the ground, where it is then collected by hand or with a small broom.

At this point, the cleaning process begins. Using tools almost identical to those used by their ancestors hundreds of years earlier, the villagers (usually women) sieve the mastic, removing much of the calcium carbonate that was collected with it.

Additional processes, including salt-water baths, are also used to separate the mastiha tears from leaves, twigs and other debris. Much like quilting or other tasks that involve repetitive hand labor, cleaning the mastiha can be very dull. Villagers enliven it by using it as a time for community, for the sharing of homes, stories, and food.

Finally, the mastic producers deliver the final product to the Chios Mastiha Grower’s Association. Here, they’re guaranteed a fair price, and also ensured that all of their product will be purchased. The Association manages all the additional processing, trade, and marketing of Chios mastiha on an international scale—something that would be difficult to impossible for individual growers to handle.

The people of Chios are deservedly proud and protective of their mastiha production. It is a deeply held tradition – one considered precious not only on the island itself, but all over Greece.

First mentioned as a digestive by Hippocrates in the 5th century BCE, the use of Chios mastiha for gastrointestinal has persevered through the ages. Although many Greeks 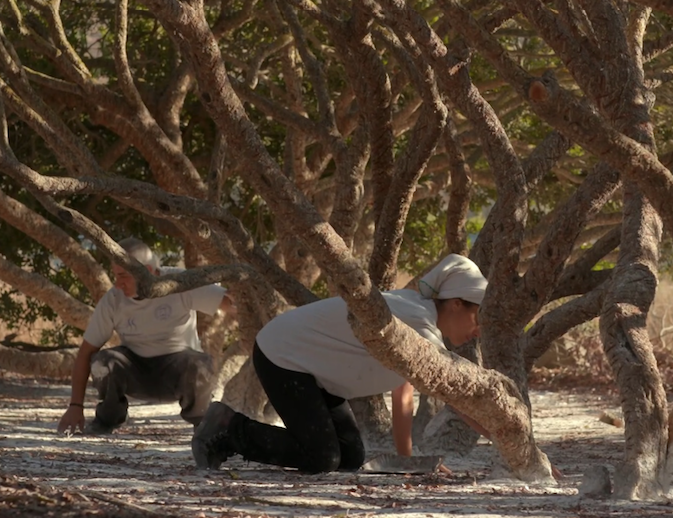 obtain this benefit by drinking mastiha liqueur, medical practitioners often recommend Chios mastic gum (CMG). This is well supported by research showing that, indeed, it is effective in resolving digestive discomfort and healing damage to the gut lining.

As early as 1984, researchers validated the historical observations with a randomized, double-blind placebo-controlled trial showing that 1 g of CMG daily after breakfast for two weeks relieved symptoms in 80% of individuals with duodenal ulcers. Among those treated with placebo, only 50% had symptom improvements (Al-Habbal MJ, et al. Clin Exp Pharmacol Physiol. 1984). Endoscopically, the duodenal ulcers were healed in 70% of those taking CMG versus just 22% of those taking the placebo.

A multi-arm study in 2010 showed that treatment with 350 or 1,050 mg CMG three times daily eradicated H. pylori in 30.8% and 38.5% of patients, respectively. The responses rates indicate that CMG does have effects against H. pylori, though it is not at the level of the standard clarithromycin-based triple therapy regimen with eradicated the bug in

Interestingly, in a fourth group of patients who took 350 mg of CMG thrice daily plus 20 mg of pantoprazole (an acid suppressant), the infection was not eliminated at all. This suggests that gastric acidity may be important for CMG to be effective.

CMG can also improve symptoms of functional dyspepsia. In a 2009 randomized trial, treatment with 350 mg of CMG thrice daily significantly improved symptoms in 77%, versus only 40% in the placebo group (Dabos KJ, et al. J Ethnopharmacol. 2010). Symptoms of heartburn, general and anxiety-related stomach pain, and dull ache in the upper abdomen were all significantly improved with CMG treatment.

In a small pilot study of humans with mild to moderate Crohn’s disease, supplementation with 2.2 g of CMG daily for four weeks was associated with significant improvements in the Crohn’s disease activity index, C-reactive protein (CRP), and interleukin (IL)-6. Noteworthy were the improvements in stool consistency and general well-being (Kaliora AC, et al. World J Gastroenterol. 2007 ).

CMG also has been shown in multiple animal models to help protect the gastrointestinal barrier from damage associated with non-steroidal anti-inflammatory drugs (Gabr KE. Int J Pharmaceutics. 1997; Heo C. Korean J Medicine. 2006 ). However, the benefits were not seen when CMG was delivered intraperitoneally – suggesting that the protective effects are a result of local action on the gut epithelium (Al-Said MS, et al. J Ethnopharmacol. 1986 ).

Some of the gut healing effects of mastiha have been attributed to poly-β-myrcene, a natural polymer found in the plant resin (van den Berg KJ, et al. Tetrahedron Letters. 1998 ). Not only does this polymer have cytoprotective properties, it also is responsible for some of the anti-H. pylori activity of CMG – which may in part even be enhanced by mastication of the gum (Sharifi MS, et al. Glob J Health Sci. 2011; Sharif Sharifi M, Hazell SL. Pharmaceuticals (Basel). 2009 ).

Like all plant substances, mastiha contains many different bioactive compounds. It is notable that in vitro and animal experiments show that treatment with whole CMG is generally more effective than its isolated fractions in resolving tissue changes associated with colitis (Papalois A, et al. J Med Food. 2012 ). This points towards a synergy between its component fractions.

Multiple clinical studies have shown that consumption of CMG improves metabolic dysregulation, even at the low dose of 330 mg thrice daily. At this level, after eight weeks, CMG significantly reduced total cholesterol and fasting glucose, with the greatest effects occurring in individuals with BMI of 25 kg/m2 or greater (Kartalis A, et al. Eur J Prev Cardiol. 2016 ).

Again, there are multiple mechanisms via which CMG may exert these metabolic effects. In the context of hypertension it appears to reduce renin secretion by the kidneys (Tzani A, et al. Atherosclerosis. 2016 ).

Clearly, we are just beginning to validate scientifically the many medicinal benefits of Chios mastiha that the Greeks have known for so many years.

With more than 10,000 kilograms being exported annually to countries including Saudi Arabia, Mauritania, Turkey, France, and the US, it is evident that international interest in mastiha is on the rise.

While this is generally a positive trend, it also presents challenges.

As mentioned previously, production of Chios mastiha is labor- and time-intensive. Supply is limited. But, given its many culinary, medicinal, and cosmetic uses, demand is high.

As is the case with all ingredients for which demand is high but supply is tight, mastiha is subject to economically motivated adulteration or substitution. This is another reason why the EU’s PDO designation for Chios mastiha is so important.

Allergy Research Group (ARG) one of the most established practitioner-facing natural products companies in the US, works closely with the Chios Mastica Growers Association (CMGA) to ensure that all the mastiha used in their formulas is verified as genuine Chios mastiha, nd that the CMGA is capable of meeting the growing demand for this product each year.

The ARG website we also provides access to product testing results for mastiha as well as for all their products. You can find the high-performance thin layer chromatography (HP-TLC) data on the company’s mastica product here: https://www.allergyresearchgroup.com/index.php?p=download&id=444

On Chios, growers are well aware of the potential for substitution and adulteration, especially as global demand for mastiha rises. The CMGA takes a very active role in planning planning and forecasting for what demand will be in future years, as well as what they can do to increase the production to meet the rest of the world’s growing interest in this ancient Aegean medicine.