“I Expect My Patients to Be Outliers”: Applying Nutrition to Improve Cancer Outcomes 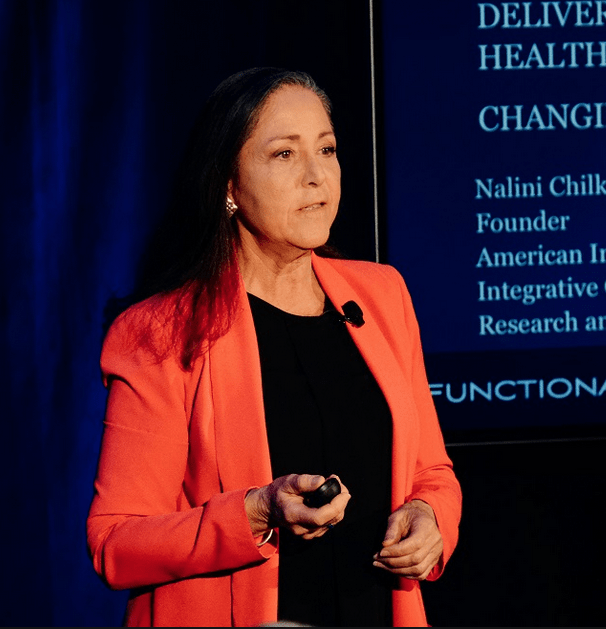 “I expect my patients to be outliers, to defy the statistics, to defy the odds,” says Nalini Chilkov, LAc, OMD, a practitioner of oriental medicine and nutrition counseling, who specializes in working with cancer patients.

Over a career spanning more than 30 years, Dr. Chilkov has treated thousands of people with diverse forms of cancer. She’s witnessed first-hand the positive impact that thoughtful, carefully-tailored diets and supplementation protocols can have.

She has also seen the bewildering confusion many patients–and physicians—face when considering nutritional strategies. There are dozens of contentious arguments over which diets and specific foods promote or inhibit cancer, how various phytochemicals impact tumors, which nutraceuticals are appropriate, and which are to be avoided.

In an in-depth webinar sponsored by Holistic Primary Care last year, Dr. Chilkov—founder of the American Institute of Integrative Oncology–dispelled much of the confusion, as she shared a host of practical tips, research reviews, and hard-won wisdom drawn from her own clinical practice.

“What if every cancer patient had a health plan, and not just a disease care plan?” Beyond simply removing or reducing tumors, cancer care needs to include modalities aimed at reducing oxidative stress, controlling inflammation, inhibiting angiogenesis while promoting apoptosis, strengthening immunity, enhancing detoxification, and controlling blood sugar.

Cancer is a Metabolic Disease

First and foremost, Chilkov urges clinicians to recognize that cancer is fundamentally a metabolic disease. The process is systemic, not localized, though it manifests as a tumor in a particular anatomic site. At the same time, the tumor microenvironment is a key area of focus, because it determines nearly every aspect of the ultimate outcome. Change the microenvironment, and you change the course of the disease.

Dietary factors play a major role in the development of at least one-third of all forms of cancer, and they greatly influence the tumor microenvironment.

“You want to use nutritional strategies to help the oncologist fight the tumors, while modulating the biological “terrain” so it becomes unfavorable for cancer growth. At the same time, you want to nourish and strengthen the patient.”

There is no simple “one-size-fits-all” nutritional support in cancer care. “People need different protocols at different stages, and it all needs to be individualized.”

That said, there are some core principles that apply for most, if not all, cancer patients.

Neoplasia is intimately connected with chronic inflammation, and survival is inversely correlated with degree of inflammation, Dr. Chilkov said, coining the term “onco-inflammation” to describe the relationship.

Inflammation promotes angiogenesis, proliferation, and metastasis. It is also the primary cause of debilitating cancer-related fatigue, experienced by roughly 80% of all patients.

“You want to do all that you can to minimize chronic systemic inflammation. An anti-inflammatory diet is key.”

Chilkov shared her “A-List” of anti-inflammatory foods and supplements. It includes:

“All of these are multi-taskers” she stressed. Among their various effects, they: Inhibit oncogenes while promoting expression of tumor suppressor genes; Inhibit mRNA translation in tumor tissue; Inhibit DNA methyl transferase (a necessary enzyme in tumor proliferation); Downregulate inflammation while stimulating the immune system.

Green Tea & EGCG: Chilkov finds that 2-4 cups of green tea per day is very healthy for cancer patients. In addition to its tumor suppressing effects, it also reduces insulin and leptin, both of which drive tumor progression.

“good for some patients but not all. Some will have liver problems with it. But this will show up quickly as an increase in liver enzymes. If you see that enzyme surge, stop the EGCG and green tea.”

Coffee: Dr. Chilkov generally advises patients not to drink a lot of coffee, not because it is inherently risky, but because coffee is one of the most heavily sprayed crops. “A cup of coffee is also a cup of herbicides.” This probably isn’t a problem for healthy people. But for cancer patients whose livers are already working overtime, it only increases the toxin load. “One cup a day is okay, if a patient enjoys it. It can help as a laxative.”

Ganoderma (aka Reishi): These mushrooms, a staple in traditional Asian medicine, contain immunostimulatory and anti-cancer compounds. Though a 2016 Cochrane metanalysis indicated that Ganoderma gives only marginal ancillary benefits, Dr. Chilkov finds that it does provide good adjunctive support, especially in reducing leaky gut, which is common among cancer patients.

Omega-3 Fatty Acids: Dr. Chilkov recommends measuring omega-3 and omega-6 levels in cancer patients. “I like to see a 4:1 ratio between omega-6 and 3, but most patients are like 12:1. So try to get as much omega-3 into them as possible.”

L-Glutamine: This amino acid is great for healing myositis and mucositis, both of which are common following chemotherapy. The pain and discomfort can make it difficult for patients to eat, which not only raises the risk of malnutrition and cachexia, but also deprives patients of simple culinary and social pleasures.

N-Acetyl Cysteine (NAC): This glutathione precursor can help support hepatic detoxification, but it will likely interact with many drugs. “You need to be careful with it,” Chilkov says.  She generally withholds strong antioxidants—and this includes herbs like Milk Thistle and phytochemicals like sulforaphane—during days 1-5 of chemotherapy infusion cycles. Give things like NAC, glutathione, and other liver support supplements after a round of chemotherapy, not during.

Supplements can and do play an important role in Chilkov’s patient care protocols, but she stressed that they are not stand-alone fixes. Nor are they essential.

When working with cancer patients, it is essential to control glucose and insulin tightly. “You want to keep the blood glucose in the lowest quartile.  Cancers thrive in a high-glycemic environment. So, it is crucial to control glycemia.”

Insulin itself may be tumor-promoting. “Not only does it drive glucose into cancer cells, it has direct tumor-promoting activity. So obviously, we want to do whatever we can to optimize insulin sensitivity and minimize excessive insulin. That means major reductions in carbs.”

For this reason, Dr. Chilkov questioned the proposed benefits of juicing.The problem with juicing is that it eliminates most of the fiber from fruits and vegetables, but concentrates the sugars. “I don’t want those glycemic surges.” Even something generally healthy like carrot juice can be very high-glycemic.

“If a patient wants to juice, I recommend they do green juices. And get a Vitamix machine, as these tend to keep a lot more of the fiber in.”

She added that patients need to be aware that grapefruit juice can accelerate drug metabolism, a significant consideration when someone is undergoing chemotherapy.

Speaking of glucose control, some practitioners—most prominently integrative oncologist Dwight McKee, MD–have advocated off-label use of metformin as an anti-cancer agent. There are some studies suggesting that metformin can attenuate the progression and promote survival in breast, prostate, and ovarian cancers. “The insulin-driven cancers will respond best to metformin, but it can be problematic for people who are poor methylators,” Chilkov says.

She prefers to use berberine, rather than metformin. This herbal extract is an anti-cancer multi-tasker that does what metformin does in terms of increasing insulin sensitivity and exerting anti-cancer effects, but without the side effects. It has the added benefit of helping to foster the growth of beneficial bacteria in the gut microbiome.

Ketosis is Key—But Not Too Strict

Owing to mitochondrial abnormalities, most cancer cells cannot metabolize ketones. Therefore, ketosis stresses them and renders them vulnerable to destruction by the immune system. Thomas Seyfried and colleagues from Boston College outlined the basis for ketosis as a cancer care strategy in their landmark–though controversial– 2014 paper.