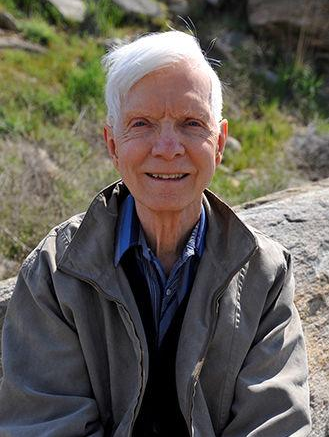 The field of holistic medicine lost one of its brightest and most enduring lights with the passing of Robert Anderson, MD, on April 6, 2020, just three days after his 88th birthday, after a prolonged period of declining health.

Clear-eyed and open-hearted, Bob touched everyone who knew him with a spirit of grace, kindness, and intelligence that is all too rare in this world.

Robert ‘Bob’ Anderson was born in Philadelphia on April 3, 1932, into a medical family. His father, Leslie Percival Anderson, MD, was a radiologist specializing in the care of people with tuberculosis. Bob spent several years during his childhood living at the White Haven Sanatorium in central Pennsylvania, where his father was an attending physician. Bob’s older brother, Richards Anderson, died from polio in 1943. Shortly thereafter, the family moved to Yakima, WA.

Bob graduated as co-valedictorian of his Yakima High School class of 1950 and then completed three years of pre-medical schooling at Willamette University in Salem, OR.

He the love of his life, Beverly Joann Morgan, at the Wesley Foundation Methodist House at the University of Washington while attending medical school. They married in June 1957, and moved to Denver, where Bob interned for a year in Denver, followed by two years of Public Health Service in Oklahoma. The Andersons had three children, Carol, Douglas, and Paul.

A lifelong music lover, Bob started learning the piano at age eight, and became an accomplished pianist by the time he finished high school. He sang in the UW a capella choir, and later in life became active in the choir and community chorale at the First Methodist Church of Wenatchee.

Bob was a family physician deeply committed to the values and ethics of general primary care. But by the mid-1970s, he—like many other doctors—grew disillusioned by the narrowmindedness of mainstream medicine, and the ways in which business interests were overtaking the spirit of compassionate service that ought to be at the center of all medical practice.

He came into dialog with a small cohort of other like-minded physicians, including Drs. Gladys McGarey, Bill Manahan, and Norman Shealy. Together, they founded the American Holistic Medical Association in 1978. Anderson was the organization’s president from 1986-88.

By the mid 1990s, the organization had grown significantly, and a big question emerged: Is holistic medicine a distinct medical specialty?

Bob, and many of the leaders of the AHMA, firmly believed that it was. In 1996, they formed a 13-member board to develop a core curriculum, a training course, and a certification exam. Anderson’s meticulously curated compendium, The Scientific Basis for Holistic Medicine, became the nucleus for the board’s curriculum.

The first cohort of board-certified holistic physicians sat for that exam in December 2000.

By all accounts, Bob guided the development of both the AHMA and the ABIHM with gentle strength, great intelligence, infinite patience, and clarity of purpose—a dedication to a big vision that transcended personal passions and opinions. The high regard with which he is held by all of his co-founders, colleagues, and students is a testament to his character. 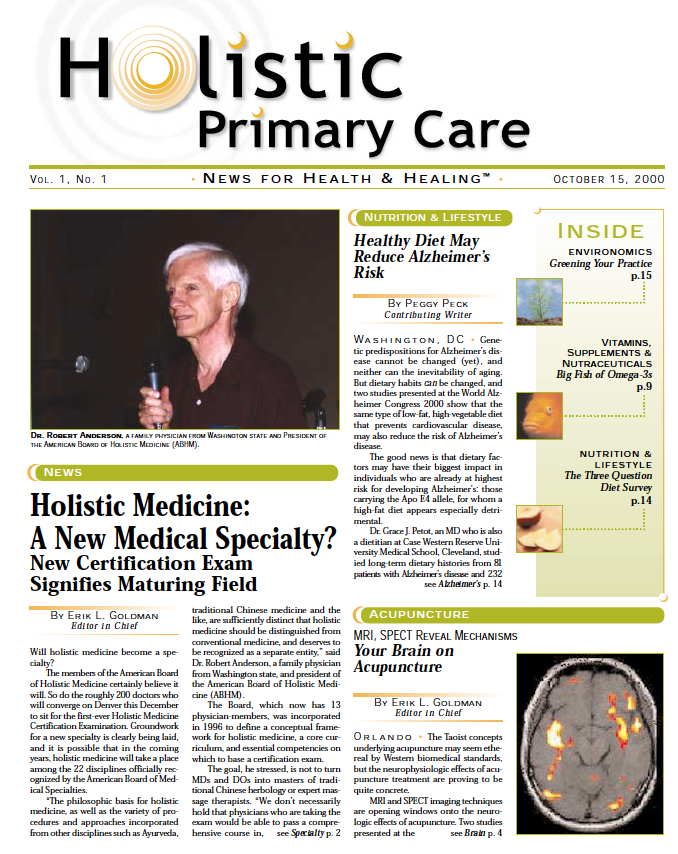 In the summer of 2000, when publisher Meg Sinclair and I were preparing to launch HPC, we attended the AHMA’s annual meeting. Bob welcomed us—total strangers with no prior connection to his “tribe”—and our brain-child, with open arms and an open mind. He immediately understood what we were striving to do, saw its potential, and gave us the sort of blessing that fledgling entrepreneurs need right before the big leap.

I’m proud to say that Bob was HPC’s first cover star. Our premier edition, in October 2000, spotlighted the then-new ABHM Board Certification program, and the emergence of holistic medicine as a specialty.

In that article, Bob defined Holistic Medicine as, “that aspect of medicine which considers the whole person—physical, mental, emotional, and spiritual—within the setting of their physical and social environment, and which utilizes all safe means for diagnosis and treatment, emphasizing those aspects of practice which promote optimal health.”

Bob’s sharp mind was able to take in, analyze, and synthesize information from a wide array of sources, always with an eye toward finding connections and points of integration. He valued rationality, but recognized that ultimately this world is full of mysteries that can only be understood with the heart.

In my last conversation with Bob, probably around 2010, we were discussing the economic challenges facing holistic practitioners, the relentless and conflicting pressures exerted by the health insurance plans, and the astonishing concentrations of wealth at the top of the medical-industrial complex.

Bob shook his head, and said, “I just don’t understand why some people feel like they need to make so much money.”

Bob’s values were different. He saw the practice of medicine as a sacred service, not a business. That spirit shaped everything he did, and touched all who had the privilege of meeting and knowing this kind and gentle man.

He was preceded in death by his wife Joann in 2018, and is survived by three children, Dr. Carol Anderson of Kalamazoo, MI, Douglas Anderson of East Wenatchee, and Paul Anderson of Spring Valley, CA, and two grandchildren, Jazzmine and Tristan.

May Bob’s memory be a blessing and an inspiration for his family, his patients, his colleagues, and all who knew him.