Earthing: Restoring Health From the Ground Up

An emerging body of research called ‘Earthing Science’ is shedding light on the ways in which the electrical charge on the surface of the Earth can regulate human physiology. The discoveries have significant implications for the healing professions.

Studies comparing a host of laboratory parameters in ‘grounded’ and ‘ungrounded’ subjects also suggest that a deficiency of electrons from the Earth may be an important factor underlying many, if not all, major chronic illnesses.

Many people these days spend the majority of their time indoors, often several stories above the ground. They wear rubber-soled (ie. insulated) footwear, and rarely have direct contact with the ground. This, Earthing advocates say, results in dysregulation of the body’s innate bioelectric systems, and predisposes to a host of chronic conditions.

It appears that if we deny our part in the global electric circuit, by lack of physical

connection with the Earth, we deprive ourselves of powerful and inexpensive health support. The good news is that the problem is easily and inexpensively remedied. A host of “Earthing” tools have emerged in recent years, opening up a new set of modalities that are integrative and holistic in the deepest sense.

In its most basic form, Earthing is as simple as doing what people have done for eons: walk, run, or sit outside barefoot. Anyone can do it. Conductive surfaces include sand, dirt, gravel, grass and concrete. Wet surfaces are more conductive than dry. Wood, vinyl, asphalt and painted concrete are not conductive.

The recent surge of scientific interest in Earthing was spearheaded by Clinton Ober, a former cable television and telecommunications pioneer, who became personally interested in the Earth’s effect on human bioelectric regulation following a near-fatal illness. He contemplated whether electrical grounding practices used in industry—for example, the use of grounding to improve television signals—might also have relevance to human health.

“We humans have a bio-electrical connection with the earth. One that, with simple ground contact, neutralizes charge in the body and naturally protects the nervous system and the endogenous fields of the body from extraneous electrical interference,” says Ober in a biographical statement explaining his emergent interest.

Planet Earth, “is a six sextillion metric ton battery that is continually replenished by solar radiation, lightning, and heat from its deep-down molten core,” says Ober and co-authors, Dr. Stephen Sinatra and Martin Zucker, in their recent book, Earthing (Basic Health Publications, 2010). “Just like a battery in a car that keeps the motor running and the wheels turning, so, too, do the rhythmic pulsations of natural energy flowing through and emanating from the surface of the Earth keep the biological machinery of global life running.”

The authors compare life without adequate grounding to a light bulb with a loose connection: “The bulb flickers, shines weakly, or doesn’t light up at all. Many people go through life with flickering or weak health.”

According to the laws of physics and electromagnetism, a body grounded to the Earth’s surface, “readily builds up a reservoir of free electrons that stabilizes your bioelectrical systems and prevents the oxidation of healthy tissue.”

In addition to the basic approach of sitting or walking barefoot on the ground, connection to the Earth can also be achieved through man-made conductive materials. Ober developed Earthing tools originally for research purposes, but later began to market them to meet consumer demand as word of Earthing benefits spread.

Among these tools are: Earthing bed sheets that contain conductive silver threads; conductive wrist, ankle and body bands; conductive carbon loaded rubber computer desk mats; and, electrode patches that can be placed directly on the body. Each is connected either directly into the ground with a ground rod, or to the ground via the ground port in an ordinary electrical outlet. Ober recently introduced the first grounded mattress.

The basic concepts behind Earthing are not new. In the manufacture of electronics, employees wear grounded shoes, wristbands and clothing to prevent build-up of static electricity. In operating rooms, patients are grounded to protect the inner electrical workings of the body, in particular the heart, from outside electrical interference.

Earthing goes beyond this concept. It not only discharges static from the body but ‘uploads’ subtle electrical energy from the Earth into the body, providing an unlimited supply of free antioxidant electrons, equalizing the electrical potential between the Earth and the person (or animal). This creates an electrically stable internal environment, supporting self-regulation and healthy biorhythms. It also quickly neutralizes reactive oxygen species (free radicals) produced by the immune system that would otherwise lead to inflammation.

“Everything is energy”, says Ober. “This is not metaphysics. It’s Electromagnetics 101”.

The current work by Ober and other Earthing researchers is affirming concepts articulated more than forty years ago by French agronomist, Matteo Tavera. In his visionary paper, “The Sacred Mission,” Tavera emphasized the then- unrecognized electrical relationship of all living things to the ground and sky. We are like antennas, he wrote, designed by Nature to receive and transmit that energy. He lamented that the modern lifestyle, including houses with insulated floors, plastic clothing, and rubber-soled shoes have slowed down or totally eliminated the electrical contacts, resulting in an increase in chronic illness.

Electron Deficiency: the Root of Inflammation?

James L. Oschman, PhD, author of “Energy Medicine: The Scientific Basis and Energy Medicine in Therapeutics and Human Performance,” and a co-investigator on two of the Earthing studies(4,8), says, “Inflammation is an artifact caused by lack of electrons in the tissue. It doesn’t have to happen.”

The anti-inflammatory effect of contact with the Earth’s negative electric charge has been documented with thermography (Figs. 1-2). Dr. Oschman says, “The observation that Earthing or grounding the human body vastly diminishes inflammation may well be the most important discovery in the history of the phenomenon, which dates back to 30 BC and before.”

One study showed that after about 20-40 minutes of contact, there is an increase in oxygen consumption and higher respiratory rate, positive metabolic changes that are perturbed when a person stopped being grounded(10). The timing of this metabolic process correlates perfectly with the time it takes for acute inflammation and pain to improve, as can be seen on thermal imaging.

A pilot study, published in 2004, focused on cortisol and sleep disturbances in 12 people suffering from stress, pain, and sleep problems. The subjects slept on a conductive mattress grounded to Earth every night for an 8-week period. Compared with baseline measurements, their average cortisol levels improved significantly, with circadian patterns showing a clear trend toward normalization. (7), On average, the patients showed a 54% reduction in midnight cortisol levels, and a 34% increase in 8 AM levels (Fig. 3). Subjectively, they reported better sleep and less pain and stress. 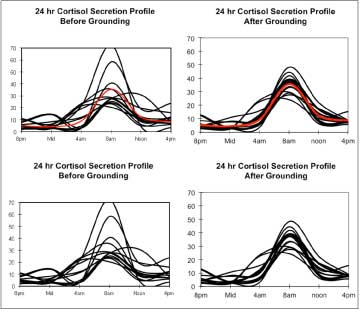 The authors suggest grounding could benefit people with cardiovascular disorders, as well as mental and emotional problems. This simple, cost-effective
and non-invasive intervention improves autonomic function and the benefits may increase over time.

In a soon-to-be-published study(8), Drs. Sinatra and Chevalier demonstrated that Earthing also affects the electrodynamics (zeta potential) of blood, significantly improving viscosity and flow. High blood viscosity is a major problem in hypertension, diabetes, and cardiovascular pathologies, including myocardial infarction, and it is affected by the electrodynamics of red blood cells.

Further studies are needed to confirm these effects, but Dr. Sinatra believes that if validated, Earthing represents an important new strategy for preventing and treating CVD “No pill on Earth can do what Mother Nature does,” he says. Besides seeing improvements in his patients, Dr. Sinatra says he saw his own longstanding psoriasis virtually disappear with Earthing, which he calls, “the most important health discovery in 35 years as a doctor.”

An Aid to Athletes

Hundreds of professional and elite athletes now use Earthing sheets, recovery bags and electrode patches. A recent study in the Journal of Alternative and Complementary Medicine, documented some of the benefits athletes have reported.

After over a decade of observing Earthing effects, Clint Ober has arrived at an interesting perspective on the alarming growth of unexplained chronic illnesses over the past half century.

“The growth in chronic illnesses since the early 1960s is likely related to the fact that we have become increasingly disconnected from the vital life force of the planet. Rubber soled shoes, indoor lifestyles without any Earth contact, and living in multi-storey, ungrounded buildings, where the voltage on a person rises the higher in the building one resides, is where we are beginning to find the answers.”

“Little more than 100 years ago, 90% of homes still had dirt floors. People put on shoes only when they went to church, school or for protection in certain occupational settings,” Ober says. “Leather soled shoes conduct some electrons, but plastic- and rubber-soled shoes conduct none. They insulate. I believe that when we switched from leather to rubber-soled shoes in large numbers, starting in the 1960s, that this was the beginning of our downfall.” 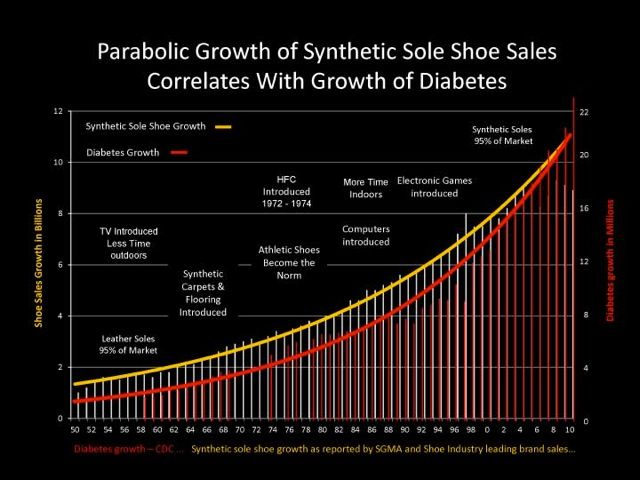 If substantiated, this observation has a profound public health implication, namely that Earthing may offer an important coping strategy in a very toxic world.

Earthing is believed to be as safe as walking barefoot on the grass. Earthing devices with cords that plug into a ground port in an outlet incorporate 100,000 ohm resistors that limit the amount of current that could possibly flow, should someone accidentally touch a live wire while grounded.

During lightning storms, Earthing appliances should be disconnected from power outlets or dedicated ground rods, just as one would want to disconnect all electrical appliances. When lightning strikes close to one’s home, admittedly a rare phenomenon, all appliances can receive a high power surge.

Clinicians should carefully monitor individuals who take medication to thin blood, regulate blood sugar, control blood pressure, or regulate hormone levels, since the regular practice of Earthing may affect all of these—for the better.

Similar to other health-supportive regimens such as juicing, switching to a vegetarian diet, avoiding fatty and processed foods, or increasing raw foods, Earthing can sometimes lessen a patient’s need for drug treatment or prompt the need for dose adjustments. In particular, people taking blood thinners should be watched closely.

Some people have asked whether being grounded increases one’s vulnerability to electromagnetic fields, stray current, wiring errors, ground current, or dirty electricity. There is no evidence of this. By equalizing the body’s electrical potential with the electrical potential of the planet, Earthing actually decreases one’s vulnerability to potentially disruptive electromagnetic pollution, according to Chevalier and Oschman. “Earthing does not stress the body. In fact, Earthing reduces every measure of stress we have used in our studies,” they say.

The Promise and Potential

Earthing science offers a new approach to disease prevention, health restoration and healthy aging. It is based on the understanding that all life on the planet functions electrically, and that our optimal functioning is dependent on an electrical connection with the ground. This opens the door to a new frontier in medicine, significantly greater sustainability in health care, and healthier lives for all. Electrical energy from the ground may be as important to our health as sunshine, air, water, and good nutrition.

How might understanding our electrical interrelationship with the planet reshape our health care system? How might it reduce the almost $3 trillion annually the US spends on healthcare? Might we live longer?

Insights from the field of Earthing could inspire a new unifying paradigm for a broader Integrative Medicine, one that allows practitioners in all areas of heath care to develop therapies based on a larger understanding of the greater planetary electrical network in which we all are a part. Earthing is a “foundational” medicine, one that can be supportive of many other modalities and therapeutic approaches.

Camilla Rees, MBA, is a freelance health writer, integrative care counselor, Radio Host on health and environmental topics and leading U.S. health advocate on the biological effects of electromagnetic fields (www.ElectromagneticHealth.org). She is co-founder of the International EMF Alliance, Campaign for Radiation Free Schools and co-author of “Public Health SOS: The Shadow Side of the Wireless Revolution”.
Contact: crgr@aol.com