The statistics for abuse of psychoactive drugs–the legal ones, such as alcohol and 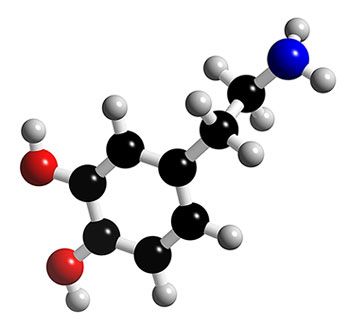 prescription opiates, and the illegal ones like heroin and cocaine–are staggering.

According to a 2005 report, Americans spent $57.3 billion on drugs of abuse between 1988-1995. Of that, $38 billion was on cocaine, $9.6 billion was on heroin and $7 billion was on marijuana. This does not include money spent on abused prescription drugs. More recent reports from NIDA/NIAA  continue to show very high drug abuse rates among Americans of all ages, especially teens.

Though the numbers are alarming, they are not surprising if one considers that over 100 million Americans have genetic antecedents predisposing them to addictive behaviors. Every day, clinicians are faced with people struggling with substance abuse problems—or the genetic predispositions that drive them.

In the past decade, extensive scientific research on neuroanatomy and neurotransmitters has found links between genes, the brain, social behaviors and psychological states, particularly to those states of “happiness” which we all desire. The goal of treatment for chemical dependency then should not only be the difficult task of becoming “drug free,” but of concurrently finding a quality of life that approaches happiness.

Together with talk therapy, life skills coaching, and support through follow-up, these can be brought together to generate a holistic approach and ultimately a new “Standard of Care.”

This article looks at the latest research related to nutrigenomics, with special emphasis on SynaptaGenX™ a well-studied, standardized combination of amino acids, trace minerals and botanical extracts that acts as a dopamine activator. This complex could be used as an adjunct in management of addictions, supporting healthy neurotransmitter balance, and reducing cravings.

It is important to understand that substance use disorders (SUD) are in large part driven by genetic defects in the dopaminergic pathways that predispose individuals to cravings and to addictive behavior (Chen TJH et al J. Psychoactive Drugs, 2011 (in press).

The cascade also involves serotonin release, which in turn stimulates enkephalins at the hypothalamus that then inhibit GABA at the substantia nigra. GABA regulates or “fine tunes” the amount of dopamine released at the nucleus accumbens (NAc) or “reward site.” Dopamine release is the normal reward for satisfying basic drives for food, a mate, and safety, and it causes us to feel comfortable and satisfied.

Certain polymorphisms cause reductions in dopamine release, which lead to what some researchers have termed reward deficiency syndrome (Blum et al. J Royal Soc Med, 89:396-400,1996). Individuals with these genetic polymorphisms crave substances that increase dopamine release at the “reward site” in the mesolimbic region of the brain; they need this just to feel “normal.”

A number of candidate genes working in concert through the reward cascade will affect release of dopamine by interacting at D2 receptors at the reward site of the brain. In a sense, we can map the brain loci responsible for the feelings of happiness and satisfaction.

Most traditional chemical dependency treatment programs are not holistic, and make no attempts to tailor therapy based on individual differences in adrenal function, thyroid function, hormone imbalances, tissue levels of heavy metals like mercury, or genetic polymorphisms affecting the dopaminergic system. All of these influence addiction behavior, and must be considered carefully.

Further, chronic administration of powerful pharmaceuticals results in down- regulation of D2 receptors and reduced dopamine release. This perpetuates rather than attenuates the core problem.

Clinically, we must recognize the biological and genetic individuality of people with addiction problems. We need to classify patients at genetic risk for drug seeking behavior prior to or upon entry to chemical dependency programs. Objectivity in diagnosis of these disorders—which genomic testing can provide—could help us improve our treatment outcomes.

Based on this, we have created a severity score system known as the Genetic Addiction Risk Score (GARS). The GARS system reflects the prevalence of different addiction-associated polymorphisms in a given individual’s genome.

We tested this approach in a cohort of 26 patients, who represented two distinct ethnic populations: Caucasian male psychostimulant addicts, and Chinese male heroin addicts. In both groups, all of the subjects had at least one risk allele; 74% had high risk profiles based on their GARS scores. Interestingly, we found that 56% of the men in both groups carried the DRD2 A1 allele, which is directly related to abnormalities in dopamine signaling. This is despite the fact that they were addicted to very different types of drugs (Blum et al IIOAB 1: 1-22).

Our group is working with Dominion Diagnostics, one of the nation’s leading drug testing laboratories, to develop gene-based addiction risk assessment tests for clinical use outside the research setting. Hopefully, the tests will be available to physicians early in 2012.

Chemically dependent people can be treated with natural dopaminergic agonists like neuroadaptogen amino-acids therapy (NAAT) to up-regulate neurotransmitter receptor density and increase dopamine release at the NAc. This affects gene expression, reduces craving, and induces a sense of well-being during and after treatment to prevent relapse (Blum et al. Postgrad Med. 2009; 121:176-96).

Evidence is emerging that SynaptaGenX™ a safe, natural, non-addicting, D2 agonist combination product may improve the health of individuals in recovery from Reward Deficiency Syndrome, including those suffering the consequences of psychoactive chemical abuse.

The formula is available in both oral and intravenous form. Taken as a supplement, 2 tablets, twice daily, ideally 1-2 hours before meals, SynaptaGenX provides specific precursor amino acid, as well as compounds that inhibit degradation of enkephalins and catecholamines in the synaptic spaces. The net effect is to increase dopaminergic “reward” activity in the mesolimbic system.

Development of the product was guided by 23 human studies including several  placebo controlled, single-, double-, and triple-blinded trials demonstrating positive effects in the management of addiction problems. The trials were recently summarized by Chen and colleagues in the Journal of Psychoactive Drugs (Chen TJH et al. J. Psychoactive Drugs, 2011 (in press)]

Some of the most impressive work involves use of neuroimaging like qEEG and fMRI. Miller and colleagues showed that after administration of the intravenous form of SynaptaGenX, aberrant electrophysiological parameters were significantly reduced or “normalized” at brain sites involved in the reward cascade, specifically prefrontal cortex and cingulate gyrus (Miller DK et al. Postgrad Med. 2010 122:188-213). This brain region plays a key role in determining risk of relapse in recovering addicts.

This is further supported by additional research on 600 out-patient poly-substance abusers. They received a special IV preparation of SynaptaGenX for ten treatment sessions along with taking oral SynaptaGenX twice daily for 14 days.

Our group found a significant reduction of chronic symptomatic markers as measured by the Chronic Abstinence Symptom Severity [CASS] Scale in poly –drug addicted patients treated with the intravenous and oral forms together, compared to oral administration alone. Specifically, patients in the combination group had markedly lower CASS scores than the oral-only group over the first week, as well as over the following 30-day period.

In another experiment involving 129 poly-drug addicted subjects, treatment with both IV and oral SynaptaGenX  produced significant declines (p=.00001) from pre- to post-treatment on CASS-R subscales for Emotional (t=19.1) for Somatic  (t=16.1) and  Cognitive (t=14.9) symptoms.

While much of the initial work was done with the IV formulation, oral administration also produces significant improvements. We found that a single oral dose of SynaptaGenX ™ was able to induce the same effect as is observed after ten training sessions using the Peniston biofeedback protocol among drug addicted patients. 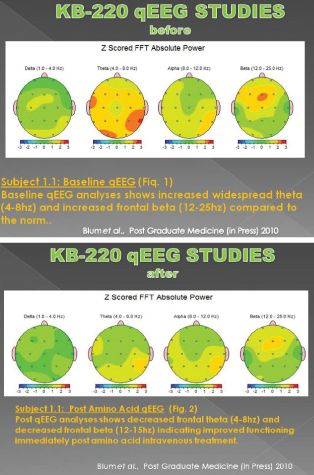 Numerous clinical trials show that long-term activation of dopaminergic receptors with SynaptaGenX will increase proliferation of D2 receptors, enhancing dopamine sensitivity and increasing the sense of happiness, particularly in carriers of DRD2 A1 allele. In a sense, SynapaGenX provides dopaminergic agonistic activity without inducing an unwanted down-regulation of D2 receptors. This conclusion awaits confirmation through PET scan studies that will allow observation of the effects of SynaptaGenX on D2 receptor numbers.

The SynaptaGenX product is not intended for use as a stand-alone agent in treatment of substance abuse problems. Instead, it should be used as an adjunct to other proven holistic modalities like music and talk therapy; hyperbaric oxygenation; spirituality; self-help groups; and biofeedback.

This is a promising modality for adolescents, especially those with attention/conduct problems or those who abuse stimulants. It is attractive as non-pharmaceutical adjunct for brain-impaired, and self-defeating disorders, especially in conjunction with therapies that exercise the brain and enable patients to achieve a feeling of well-being (Conner et al. J Subst Abuse Treat. 2010; 38:178-90).

Though it generally has an excellent safety profile, SynaptaGenX may not be appropriate for pregnant or lactating women, or children under 12 years of age. As with any dopamine agonist, the product should be used with extreme caution in people with schizophrenia, and those taking other psychoactive medications.

While we do not yet fully understand all of the complex neurochemical interactions that make up the dopaminergic reward cascade, we certainly know far more about it than we did several decades ago.

Improving the overall health and well-being of individuals in recovery is extremely important for improving treatment outcomes. New holistic techniques and concepts that have emerged from scientific research are being incorporated into recovery programs, enhancing brain function not only in the patients themselves, but improving the psychosocial health and well-being of the entire family. For the first time in many decades “science will meet recovery.”