Obstructive Sleep Apnea (OSA) is a serious disorder. Statistically, it shortens life span by a startling 8-10 years, which is equivalent to diabetes & smoking.

It is estimated that OSA affects between 5-10% of the general American population. The medical literature is filled with correlations between OSA and diabetes, obesity, heart disease, stroke, hypertension, mood disorders, multiple sclerosis, chronic fatigue, sleep disorders, ADHD, migraines, hypothyroidism, and respiratory disorders. It is causative in 80% of nocturnal strokes, increases hypertension by 45%, and is linked to dementia.

Military veterans are at particularly high risk, and OSA often goes undiagnosed among veterans because many vets do not fit the stereotypical physical profile of the “classic” apnea patient: an overweight middle-aged male who snores.

According to Max Hirshkowitz, Director of the Sleep Research Center at Baylor-Veterans Affairs Medical Center, Houston, veterans are four times more likely than other Americans to suffer from OSA, Fortunately, there are relatively simple, inexpensive and effective modalities for diagnosing and treating OSA, unlike some of the other health problems veterans often face. 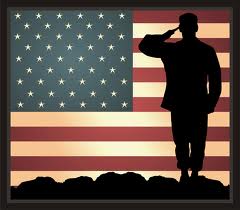 veterans. One common thought has been that OSA is linked with Post Traumatic Stress Disorder (PTSD), which is common among veterans who have experienced combat.

The authors note that, “Obstructive apneas are often more common in REM sleep than in non-REM stages of sleep, because the decreased tone of muscle of the airway during REM is more likely to lead to partial or complete upper airway obstruction. Thus, OSA generally disrupts the continuity of REM periods and decreases the proportion of REM sleep per night.”

Most authors who’ve published on the subject are in agreement that OSA is common among combat veterans, but not everyone agrees with the hypothesis that OSA is intrinsically linked with, caused by, or reflective of PTSD.

Researchers from Walter Reed Army Medical Center presented a study at the 2011 American Psychiatric Association annual meeting, suggesting that while OSA is common among vets, it is not any more prevalent than in non-vets seeking clinical help for sleep problems. The study involved retrospective analysis of electronic medical records from active-duty soldiers re-deploying to Iraq or Afghanistan, who sought medical attention for sleep problems.

However, the prevalence was nearly the same as in non-veterans with chronic sleep problems. Moreover, Capaldi and colleagues found no statistically significant difference in the prevalence of OSA among the soldiers diagnosed with PTSD and a control group of “others,” which included patients with depression, anxiety or no psychiatric diagnosis. The study will be published later this year in the journal, Military Medicine.

Whether or not OSA is directly related to PTSD, the fact remains that it is extremely common among veterans. According to Capt. Capaldi, “a key takeaway is that routine screening for sleep problems may be beneficial for all combat veterans, since many who suffer from sleep disturbance post-deployment are otherwise healthy.”

OSA is a significant burden on the healthcare system as shown by a 10-year study showing that, “Sleep apnea patients use healthcare resources at approximately twice the rate of controls as far back as ten years before their diagnosis,” reported Kryger and colleagues at the 1997 annual meeting of the Associated Professional Sleep Societies (APSS).

Kapur and colleagues at the University of Washington estimated that the average untreated sleep apnea patient in the US spends $1,336 more annually than an individual without apnea. This results in approximately $3.4 billion per year in additional medical costs—and that was 1999 dollars! (Kapur V, et al. Sleep. 1999; 22 (06)).

It was alarming to realize that less than 10% of Americans suffering with OSA are being diagnosed and treated. This is despite the fact that patients with OSA are treated for the co-morbid conditions listed above, typically for many years before the OSA is detected.

Why OSA is Often Missed

There are two main reasons so many people with apnea go undiagnosed. First, many people—physicians included–hold the mistaken belief that OSA is a disorder of overweight males who snore. While many people with apnea fit that description, there are also many who do not. We have seen many pediatric sleep lab videos of underweight men and women with OSA.  Most do not snore, but are gasping for breath all night.

Secondly, the most widely used apnea screening tool is a subjective questionnaire about daytime sleepiness called the Epworth Scale. It is good as far as it goes, but fails to detect many cases.

Recognizing the efficacy of apnea treatment, and the potential to prevent many deaths, we at Physicians Consulting Inc (PCI), sought out a better screening tool—one that was non-invasive, easy to use, and could provide clinicians with objective, quantitative data rather than a subjective questionnaire.

In our research, we found an FDA-approved device called the Eccovision® Acoustic Pharyngometer. It allows physicians to quickly and easily measure a patient’s pharyngeal airway size and stability. Studies show a clear relationship between the existence of OSA and a narrow, collapsible, airway. 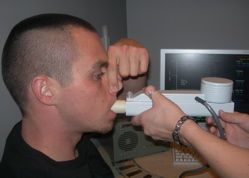 technology, similar to a ship’s sonar. Sound waves are projected down the airway and reflected back in such a way that the device’s software can analyze and quantify changes in the airway’s cross-sectional area.

The test is minimally invasive, takes 2-3 minutes, and is generally administered by a medical assistant. This makes it a convenient screening tool for all patients who have the co-morbid conditions associated with OSA. If you add up the number of people with one or more of these conditions, you’re talking about 50-70% of patients in a typical primary care practice.

The Eccovision is useful in determining the need for further testing for OSA (i.e. Polysomnogram). The basic screening gives us two important pieces of Information: How large is the airway?  And how stable is it? With this information, and interpretation of the associated values, you can decide whether or not to recommend an overnight sleep study for the patient.

The testing process involves taking two readings: a baseline and a “collapse” reading. It is not at all unpleasant for the patient, who simply breathes in and out for the baseline test. For the “collapse” test, he or she slowly blows out a breath until there is no air left to blow. If there is a collapsing of the airway at this point, it will be “seen” on the graph based on the sonar reflection.

Airway size is determined by reviewing the data gathered from the Baseline test.  The numbers displayed on the right side of the screen indicate Volume, Mean, Minimum and Minimum Distance.  The mean should be 3.2 for men and 2.8 for women. The minimum should be 2.0 for both men and women. These values represent average airway size for non-apnea control subjects.

Airway stability, as much as size, will determine an individual’s predisposition for OSA. A large airway that is completely unstable and collapsible may be no better than a very narrow airway with good stability. Analyzing the stability of the airway involves comparing the Baseline test with the “Collapse” test.

A large gap in airway size between the baseline and the “collapse reading indicates a high degree of collapsibility and a high likelihood of OSA. This will also be evident on the graph itself as there will be a large gap between the lines in the oropharynx and hypopharyngeal area.

The Eccovision can calculate the percentage of the original baseline airway volume the patient has left over after the collapse test. Ideally, the airway should maintain 70% of its size when collapsed, and/or lose no more than 30%.

Pharyngometer screening can definitely lead to better outcomes. In primary care offices where staff members routinely perform pharyngometer exams, referrals for polysomnogram sleep studies increase from approximately 1-2 per month to 10-15 per month. Patients will generally comply with a recommended sleep study when they can see their pharyngometer readings on the screen. Your referral to a sleep lab is no longer based on a subjective questionnaire, but on visual data.

Patients referred for sleep studies typically do get properly diagnosed and treated, and this saves lives. OSA patients are generally fitted for a CPAP (continuous positive airway pressure) system.  For moderate OSA, oral appliances are often effective. If a patient has a BMI greater than 28, a medical weight loss program is certainly appropriate.

All patents with apnea will likely benefit from a lifestyle & nutrition-based program aimed at reducing chronic systemic inflammation.

Average insurance reimbursement for this 2-3 minute test is $65, and there is no limit to the number of tests per patient. We believe pharyngometry is an ideal addition to primary care practice: it is safe, inexpensive, effective, addresses an unmet clinical need and has great potential to improve patient outcomes and quality of life.

Kauley Jones is President of PCI, a medical development company that assists physicians in addressing the challenges of increasing costs and declining reimbursements. With over 20 years in the holistic medical field, Kauley is an expert in researching the very best in cutting-edge, evidence-based ancillary services that enable doctors to improve their bottom line while improving patient outcomes. She will be a featured speaker at Holistic Primary Care’s upcoming Heal Thy Practice conference in Long Beach, CA, Nov. 4-6, 2011.