Blood Viscosity: The Role of Blood Flow in Cognitive Function

In April 2012, the World Health Organization published a new report on the alarming worldwide trends in dementia. The report estimated that in 2010, approximately 35.6 million people were living with dementia. By 2030 that number is set to double to 65.7 million.

Dementia is an age-related illness of the brain affecting memory, behavior and the ability to perform everyday tasks. It is a disease state that includes Alzheimer’s disease, which is responsible for about two-thirds of dementia cases.

Blood viscosity is a fundamental yet often overlooked parameter for circulatory health, and a robust predictor of cardiovascular diseases (read, Blood Viscosity: The Unifying Parameter in Cardiovascular Risk).  In this review, we turn our attention from the arterial system to the brain in order to highlight the important connections between blood viscosity and age-related cognitive impairment or dementia.

After controlling for age, higher blood viscosity correlated with lower scores on the general cognitive factor (p<0.01) and all of the individual cognitive tests (p<0.05 to p<0.01) with the exception of the verbal fluency test (Rafnsson S, et al. Age Ageing. 2010;39:217-22).

Cognitive decline translates directly into reduced quality of life and diminished survival in elderly populations. Blood viscosity is an important determinant of blood flow—the higher the viscosity, the lower the blood flow–and this is significantly linked with cognitive function. 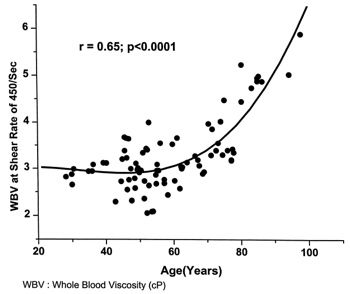 Back in 2000, researchers at the Gerontology Research Center at the National Institute of Aging randomly selected 147 individuals from the Baltimore Longitudinal Study of Aging, and examined the hemodynamics of cognitive impairment. They found a significant pattern of increased blood viscosity with respect to age (Ajmani RS, et al. Neurobiol Aging 2000; 21:257-69).

Interestingly, there was almost no age-associated increase in viscosity until after 60 years, at which point viscosity seems to increase dramatically (see Fig.1).  The NIA team was able to document age-associated decreases in blood flow using transcranial Doppler ultrasound.

While other flow-related parameters such as plasma viscosity and red cell rigidity showed a linear increase with age, blood viscosity increased exponentially. The amplified effect on blood viscosity as a function of age underscores the role that whole blood viscosity plays in unifying the biophysical impact of the cellular and protein content in blood. In this study, hematocrit did not show any age-dependent changes.

During the 1980’s, researchers at Massachusetts General Hospital published a breakthrough study revealing the role of cerebral blood flow as the mechanism of action and causal link between blood viscosity and age-related cognitive decline.

The authors concluded:  “As blood flow and shear stress decrease to very low levels, the viscosity markedly increases.  This is in part due to interaction of fibrinogen and red blood cells causing cell aggregation.  A vicious cycle could develop in this fashion resulting in even greater resistance to flow.”

In a separate study of 90 apparently healthy males aged 16 to 80, both blood viscosity and hematocrit-corrected blood viscosity were shown to rise with age (Lowe GD,et al. Scott Med J. 1980;25:13-7).

These insights among others crystallized into the understanding that blood viscosity is at the center of a constellation of risk factors for age-related organ dysfunction. In 1998, a scientific review by the National Institute of Aging presented blood viscosity as the hemodynamic variable by which other factors translate into incremental risk, ultimately resulting in impaired function with increasing age (see Fig. 2) (Ajmani RS, Rifkind JM. Gerontology. 1998; 44:111-20). 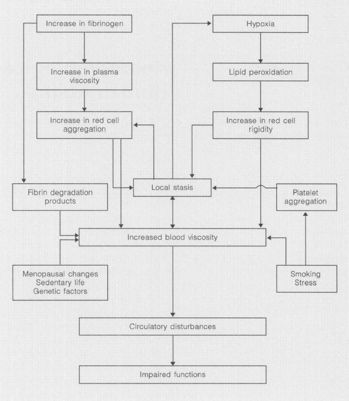 The relationship between blood viscosity and blood flow (or perfusion) makes intuitive sense, to be sure, and it has also been confirmed through empirical studies. Clinically, measurement of blood viscosity could be a useful surrogate measure of perfusion, and much better suited than perfusion studies for routine use in the general population.  Simply put, elevated blood viscosity translates directly into reduced blood perfusion.  When blood flow is sufficiently disturbed, hyperviscosity can present as organ dysfunction with or without sensation of pain.

Alzheimer’s disease is a subset of dementia that holds special importance because of its high incidence and the lack of any consensus on its causes.  Histologically, Alzheimer’s disease presents with plaques of beta-amyloid protein and neurofibrillary tangles of hyperphosphorylated tau protein in neurons.

Alzheimer’s is diagnosed by clinical manifestations of cognitive decline, and by neuropsychological testing.  Brain imaging and histologic analysis can strengthen diagnoses.

There are a number of emerging—and competing–hypotheses on the etiology of Alzheimer’s disease (read, Is Herpes a Trigger for Alzheimer’s Disease?). One hypothesis, posited by UC San Diego researchers in 2002, proposes that Alzheimer’s disease is actually a form of vascular disease. In a paper published in the journal, Stroke, the authors give nine key reasons to support this notion:

We have presented a perspective on age-related cognitive decline, in general, and on Alzheimer’s disease specifically, which we hope will reshape prevailing attitudes of fatalism towards these illnesses held by many patients and physicians alike. We profoundly disagree with the idea that “nothing can be done” about age-related cognitive impairment.  On the contrary, we hold the view that much critical research has already been completed.

Blood viscosity has been demonstrated in multiple large clinical trials to have significant links with age-related cognitive impairment.  The studies have established empirically the relationship between blood viscosity and cerebral blood flow—a relationship that is also highly intuitive. Importantly, blood viscosity is easily modifiable via nutritional, botanical and pharmacologic treatments.

The pattern of exponential increases in blood viscosity after the age of 60, as reported by the research group at the National Institute of Aging, helps to define an at-risk population that may benefit from blood viscosity monitoring and treatment. The availability of clinically practical instrumentation for blood viscosity measurement, such as is now available at Meridian Valley Laboratory, creates a new avenue for detecting and controlling age-related blood flow disturbances in mid-life and senior adults, especially those 60 years of age and greater.

Drs. Ralph E. Holsworth, Jr. & Jonathan V. Wright are practitioners and clinical researchers, who serve on staff at the Tahoma Clinic in the Seattle area, a facility founded by Dr. Wright.  Dr. Wright is also the Medical Director of Meridian Valley Lab, which recently acquired the Hemathix Blood Analzyer, the world’s most advanced blood viscometer.  After a year of work to validate this lab equipment, Meridian Valley is making the Blood Viscosity Profile available to clinicians in the US through its central lab services.