Telomeres, Aging, & Disease Prevention: Do Telomere-Targeted Treatments Have a Role in Clinical Practice?

Telomeres—the DNA caps on linear chromosomes that prevent aberration or loss of genetic information during cell division—have aroused considerable interest in recent years as targets for “anti-aging” and chronic disease prevention strategies. Likewise, there are many products now promoted for activating telomerase, an enzyme that preserves telomere length.

The medical literature, to say nothing of the consumer media, is replete with promises of the potential benefit of preserving telomere length. Research into the biological significance of telomeres and telomerase culminated in a 2009 Nobel Prize in Physiology and Medicine for Drs. Elizabeth Blackburn (UCSF), Carol Greider (Johns Hopkins), and Jack Sztostak (Harvard). Telomeres on human chromosomes can be seen, highlighted in yellow, in the accompanying micrograph (courtesy of Dr. Michael West, www.michaelwest.org) 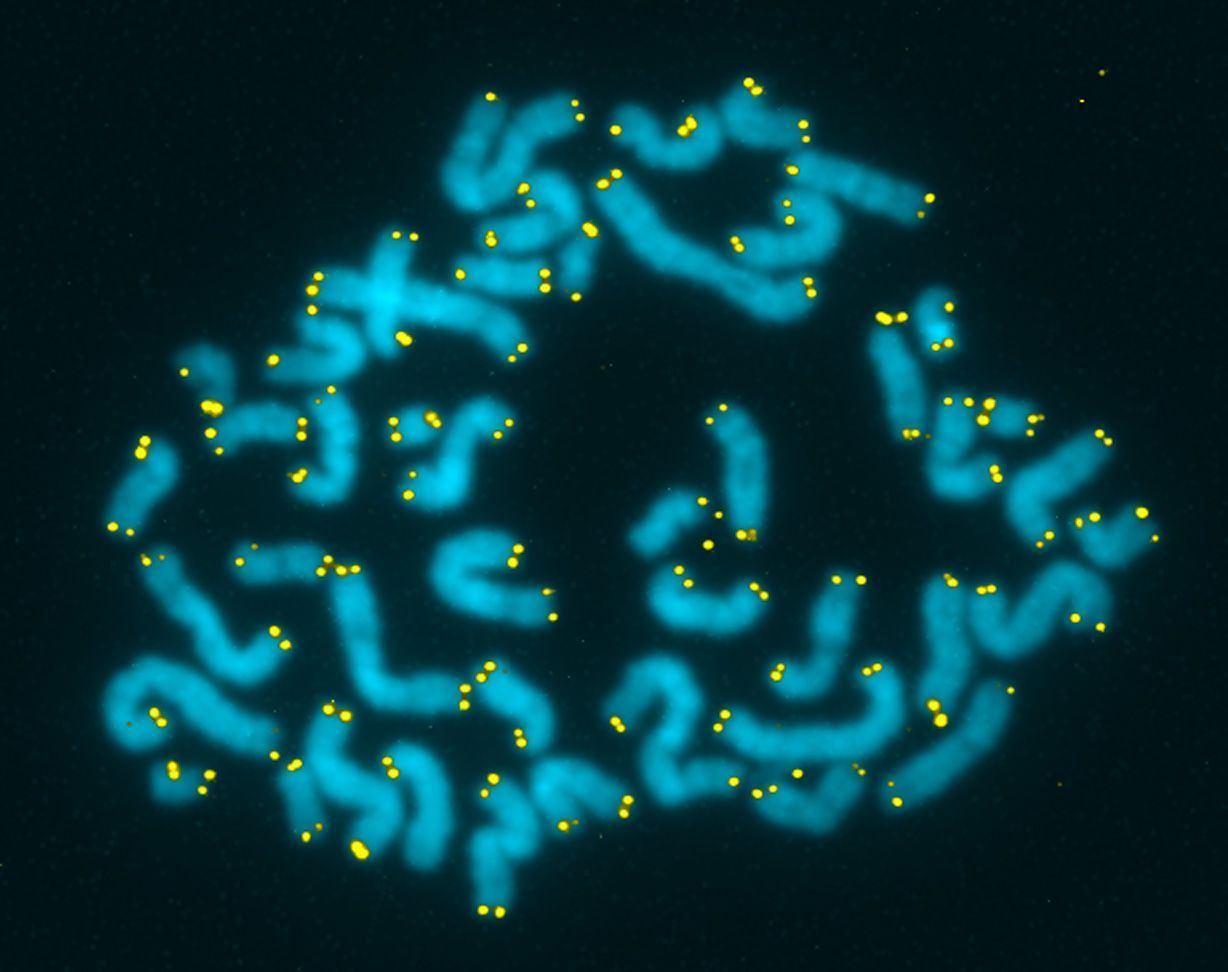 Longer telomeres are hypothesized to correlate with improved longevity and reduced disease burden. Several pharmaceutical and biotech companies are actively developing drugs that target telomeres, and a growing number of botanical medicines and nutritional products are sold as telomere preservers.

It is generally true that these “protective regions” of DNA shorten with repeated cell division in somatic cells, suggesting that telomere length is a marker for aging.  Shortened telomeres may reach a point where they cannot support normal division of chromosomes, resulting in cell senescence (replicative arrest) and abnormal chromosomal function. These changes can result in altered gene expression, cancer propagation, immune dysfunction, aging of tissues and the emergence of chronic disease. Indeed, aging cells with shortened telomeres seem to be predisposed to “metabolic mistakes.”

The enzyme telomerase (a reverse transcriptase) acts to extend telomeres and reduce their attrition. If telomere shortening correlates with aging and disease, and telomerase can sustain or lengthen telomeres, then simple logic dictates that interventions to modulate the telomere/telomerase “duo” represent a promising strategy for preventing, delaying, or minimizing degenerative diseases associated with aging.

However, simple logic does not always apply in the realm of physiology and medicine. While tweaking telomeres and telomerase may enchant many scientists and clinicians—and the concept certainly has become popular in anti-aging medicine circles—matters are not quite as simple as some individuals may have hitherto supposed.

Telomere length and telomerase expression appear to be linked in many, but not all studied species (sea urchins are one exception). While it is generally true that telomeres shorten with age, and that shortened telomeres tend to “push” a cell towards senescence prior to apoptosis (cell death), it is important to keep in mind that some people start with longer telomeres than others.

The gene that regulates telomerase expression is “silenced” in healthy cells. Some anti-aging clinicians hold that telomeres can be lengthened—and by logical extension, cellular aging delayed—by “switching on” telomerase activity by administration of certain compounds. Extracts of the herb Astragalus are one example.

It is true that increased telomerase activity may lengthen telomeres, but one must realize that this enzyme is also expressed preferentially in cancer, as well as in certain germ cells and stem cells (immortal cells). There has been some debate on the role of telomerase induction and increased cancer risk, though many experts in the field deny that there is a significant risk http://www.sierrasciences.com/).  This is clearly a question warranting further research

We know relatively little about selective telomerase enhancement, though it has become an important target for pharmaceutical or nutraceutical companies seeking to capitalize on the potential to promote longevity and reduce age-related diseases (www.tasciences.com,  www.geron.com). Much of the research on telomerase and telomeres is closely guarded by companies with proprietary interests.

In clinical practice, we’re left significant questions: do interventions aimed at lengthening telomeres make good scientific sense as a means of reducing the burden of age-associated diseases, and are these interventions safe over the long term?

The Pros & Cons of Cellular Senescence

We do know that shortened telomeres exert a “telomere position effect” which alters gene expressions at the cellular level. In this circumstance, DNA repair genes do not function properly, and those genes that promote cellular aging may emerge. The aging cell, with its shortened telomeres, seems more prone to gene transcription “mistakes.”

However, one must pause and think about the induction of cellular senescence as a potential defense mechanism against age-related cancer. Cellular senescence and apoptosis are clearly a part of the aging process, but they are also a means of eliminating dysfunctional, aberrant or neoplastic cells.

Furthermore, telomere loss or compromise is not consistently shown to be telomerase dependent and it may not always show a linear relationship with advancing years. For example, telomere length rapidly decreases in childhood (up to the age of 20 years), as it does in the elderly (greater than 65 years).

While telomerase is not expressed in most somatic cells, some cells (expanding immunocytes, germ cells and cancer cells) express high levels of telomerase. The laboratory tests that many anti-aging doctors are using for assessing telomere length are based on telomere measurement in white blood cells (T-lymphocytes). Some studies imply that telomere loss may not always exhibit a clear correlation with cells’ replicative history. These concerns call into question the sensitivity, specificity, and validity of telomere length measurement as a reliable indicator of physiological age.

Telomeres loss is associated with sedentary lifestyle, oxidative stress, cancer, insulin resistance and chronic inflammatory diseases, to name a few. But to some degree, this is a “chicken and egg” situation. Does the telomere loss “cause” or “promote” development of diseases, or is telomere shortening itself a reflection of an underlying disease-prone state?

To add to the conundrum, laboratory studies of germinal centers that produce B cells (lymphocytes), show that telomere length can actually increase in spite of intense cell replication. This observation runs somewhat counter to the basic premise of anti-aging interventions, which are predicated on the idea that repeated cell replication shortens telomeres. Overall, though, telomere shortening appears to be correlated with age and biomarkers of aging (http://www.spectracell.com/)

Dr. Peter Hornsby, a researcher on aging and cellular senescence at the University of Texas Health Science Center, San Antonio, has published an excellent review article on the role of telomerase in the aging process (Hornsby PJ, Exp Gerontol, 42, 7, 575-581, 2007). This article is full of debate and it reviews many of the unanswered questions relevant to anti-aging therapeutics.

With all of the caveats and questions in mind, there is a general consensus that telomere length has reasonable clinical predictive value as a marker for tissue aging and disease propagation. We must recognize that there is clear association between shortening of telomeres and common diseases including cardiovascular disease (atherosclerosis), hypertension, insulin resistance (Metabolic Syndrome X), diabetes mellitus, and diseases associated with cognitive decline (dementia).

In a pivotal study, researchers in the Department of Human Genetics at the University of Utah examined the relationship between telomere length and mortality in a cohort of 143 otherwise normal, unrelated individuals greater than 60 years of age. They found that overall, individuals with shorter telomeres had more limited survival. Notable increases in death occurred as a consequence of cardiovascular disease and infectious disease among the people with shorter telomeres (Cawthorn RM et al, Lancet. 2003; 361(9355): 393-5).

Telomere preservation interventions should not be undertaken in isolation. Meticulous management of co-morbid conditions is obligatory. Keep in mind that Metabolic Syndrome X and diabetes are classic disorders of premature aging. Every attempt should be made to tackle the following issues with appropriate medical interventions:

While no pharmaceutical has yet been approved for telomere modulation, a number of natural substances (e.g. Astragalus extract) and specific dietary supplements are widely promoted for this purpose.

The long-term safety or efficacy of nutraceutical interventions for telomere support remains unknown. That said, a number of the factors influencing telomere length could be positively affected by relatively safe and low cost interventions (Table 1). These safe and simple strategies aimed at telomere preservation and lengthening will likely have general health benefits beyond any proposed effects on telomeres or telomerase. 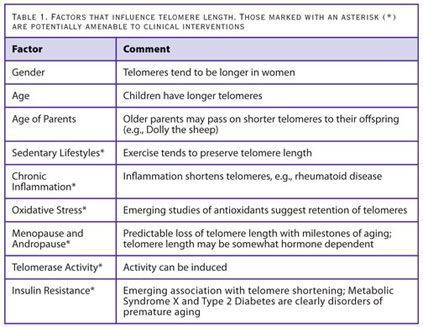 Research data and clinical observations permit the recommendation of the following clinical protocol for telomere support (Table 2). There are other “natural protocols” for telomere lengthening currently being promoted, most notably the Patton Protocol (www.tasciences.com). I believe these may be superseded by a more comprehensive approach to telomere support and age management without such a direct focus on telomerase induction.

I recommend the following: 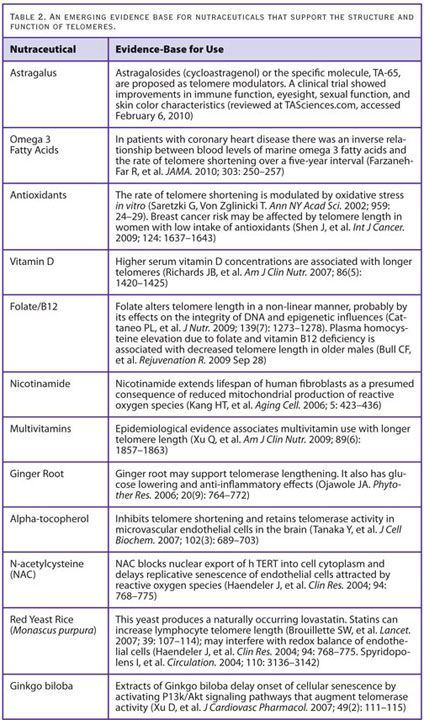 While the evidence base supporting dietary supplements in this context continues to grow, it is important to recognize that supplementation is not a substitute for specific dietary guidelines. In brief, the anti-aging, telomere-supporting diet should involve:

In future educational columns on natural therapeutics, I will focus on three very important issues in anti-aging or regenerative medicine: stem cell support, the use of calorie restriction mimetics, and support for telomere structure and function. I call these “The Anti-Aging Triad.” I believe that these three areas of longevity medicine interdigitate in a manner that creates the most important and promising frontier for “turning back the clock” and improving our patients’ overall health.

STEPHEN HOLT, MD, PhD, is the founder and Scientific Advisor of Natural Clinician, LLC (www.naturalclinician.com). This article, the first in a series of articles on integrative medicine, is adapted from Dr. Holt’s new book entitled, The Anti-Aging Triad (www.hiom.org).