A number of recent studies point to the role of glycation and the accumulation of advanced glycation end-products (AGEs) in triggering inflammation and oxidative stress, known precursors to a number of disease states, including cardiovascular disease and diabetes. More generally, glycation is directly tied to accelerated aging.

It seems that glycation is at the center of the chronic disease storm, so it is important that clinicians understand as much as possible about this process and the interventions that can be used to attenuate it.

Glycation is a type of chemical reaction that occurs when glycans, such as fructose and glucose, bind with proteins, lipids, or other organic molecules without the controlling action of an enzyme. 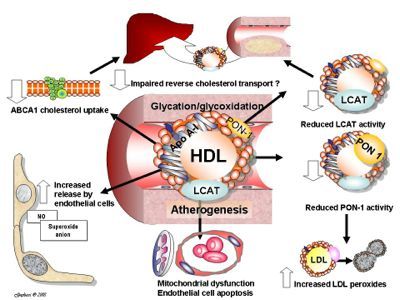 Two of the most well-known Amadori products are hemoglobin A1c (HbA1c) and fructosamine. It is important to recognize that at the stages of Schiff and Amadori base formation, the glycation process is reversible; once AGEs have formed, it is not.

Because glycation is always occurring, it is essential to evaluate the effects of diet, exercise, and supplementation to ascertain that glycation levels are in check.

The two most common and reliable tests for evaluating glycation are the HbA1c and fructosamine tests. These detect glycation at the stage of Amadori rearrangement, when glycation can still be reversed and formation of health-threatening AGEs can be prevented.

HbA1c is formed when hemoglobin—the protein that carries oxygen in the blood—binds with glucose in the blood, forming a glycosylated hemoglobin molecule. The higher the level of blood glucose, the more HbA1c is present.

Given that glycation is a key driver of diabetic retinopathy, neuropathy, and nephropathy, the HbA1c test is of vital importance in the care of people with diabetes (Nawale RB, et al. Indian J Biochem Biophys. 2006; 43(6): 337-344). According to the American Diabetes Association (ADA), patients with “pre-diabetes” or frank diabetes should be tested every three months.

Given what is now known about glycation’s deleterious effects across organ systems—particularly its ties to cardiovascular disease, cancer, neurodegeneration, and accelerated aging, some physicians believe that the HbA1c test should be used in all adults who want to minimize glycation-related damage (Vasdev S, et al. Cell Biochem Biophys. 2007; 49(1): 48-63; Whitmer RA. Curr Neurol Neurosci Rep. 2007; 7(5): 373-380)

For people who do not have diabetes, the normal level of HbA1c generally ranges from 4.5% to 6%. According to the ADA, diabetes is diagnosed at an HbA1c of 6.5%. Measurements in the range of 5.7% to 6.4% qualify as “pre-diabetes.”

For optimal health, an HbA1c level of less than 5% is ideal, according to some studies.

Bear in mind, however, that glucose control only explains part of the variability in HbA1c levels. One study found that in a non-diabetic population, only one-third of the variance of HbA1c levels is attributable to glucose intolerance. Other factors are at play in producing consistent changes in HbA1c levels, including dietary glycotoxins from processed foods and foods cooked at high temperatures, as well as low antioxidant intake (Yudkin JS, et al. Diabetologia. 1990; 33(4): 208-215).

Like HbA1c, the fructosamine test has been available for several decades and can be used to measure overall blood glucose levels, though it is not used as commonly as the HbA1c test.

The main difference between the two is that the fructosamine test measures glycated protein—rather than glycated hemoglobin—in the blood.

The proteins to which glucose binds typically circulate in blood for 14 to 21 days. Whereas the HbA1c reflects blood glucose levels over a period of two or three months, the fructosamine test gives a view through a smaller time-window, say a period of two to three weeks (Chen HS, et al.Zhonghua Yi XueZaZhi (Taipei). 2002;65(4):151-155).

For this reason, it is preferred over the HbA1c for assessing the impact of a recent change in medication or diet, since it allows us to monitor the effectiveness of the changes more quickly.

The fructosamine test is also useful for evaluating women with gestational diabetes because it shows the effects of short-term hormonal fluctuations on blood glucose levels (Delgado MR, et al. Rev Med Chil. 2011;139(11):1444-1450). Another group in which the fructosamine test is preferred is those with conditions that shorten the red blood cell life span, such as hemolytic anemia or blood loss.

A 1999 study examined the accuracy of a fingerstick fructosamine test compared with a clinic-based fructosamine test, and an HbA1c test in outpatient management of diabetes. The outpatient fingerstick test had equivalent accuracy as both other tests. However it is less expensive and more convenient (Cefalu WT, et al. Diabetes Technol Ther. 1999;1(4):435-441).

Unlike HbA1c, there are no widely agreed upon norms and thresholds for fructosamine. An individual patient’s levels must be evaluated in the context of other factors including gender, age, and clinical findings. If the overall clinical picture suggests high risk for end-stage problems associated with chronically high glycation levels, then it makes sense to use the fructosamine level as a short-term indicator of changes—positive or negative—and as a guide for interventions.

Though high levels of glycation can lead to serious problems, the good news is that it is reversible and preventable. Several natural ingredients have shown promise in reducing glycation. These include benfotiamine, chromium, biotin, carnosine, ginger, cumin, cinnamon, black pepper, and green tea. Certain vitamins can also help.

Interestingly, benfotiamine, a highly active form of thiamine, can play a significant role in reducing AGE formation and subsequent tissue damage. In clinical trials it has actually been shown to suppress AGE-dietary effects. Once absorbed, it increases intracellular thiamine diphosphate, a cofactor needed to activate transketolase, an enzyme that reduces tissue levels of AGE’s.

A study of carnosine and related compounds on the formation of AGEs in uremic patients on dialysis showed that carnosine slowed the development of AGEs better than similar peptides like anserine and homocarnosine (Alhamdani MS, et al. Perit Dial Int. 2007;27(1):86-89).

A 2009 study examined various dietary agents for the prevention of non-enzymatic protein glycation and the prospects for alleviating diabetic complications.

Another key strategy for preventing and reducing glycation is through diet. Avoiding seared and grilled meats (instead steaming, boiling, or simmering them in liquid) and processed foods, as well as increasing one’s consumption of vegetables and fruits, are ways to prevent glycation naturally.

Gaetano Morello, ND, is a naturopathic physician practicing in West Vancouver, BC, Canada. He received his Doctor of Naturopathic Medicine from Bastyr University of Natural Health Sciences in Seattle, Washington. Since 1991, Dr. Morello has been training and educating physicians, pharmacists and health experts on the scientific use of natural medicines in the fields of cardiology, immunology, gastroenterology, anti-aging and detoxification. In 2013, Dr. Morello joined the newly-created Complex Chronic Disease Program located at BC Women’s Hospital & Health Centre. Dr. Morello is author of numerous papers on natural medicine. He is on the medical advisory board of Integrative Therapeutics.