Two new studies indicate that adding oral probiotics to the therapeutic mix boosts the efficacy of conventional drug protocols in eradicating Helicobacter pylori, the most common bacterial pathogen worldwide, and a main driver of peptic ulcers. 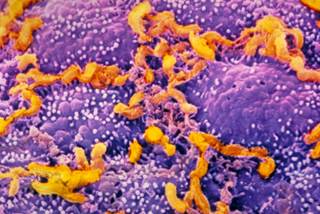 Goran Hauser, MD, at the University Hospital Rijeka, Croatia, led a multicenter study involving 804 patients with confirmed H. pylori infections. In addition to standard “triple therapy” (proton pump inhibitor, amoxicillin and clarithromycin), patients were randomized to placebo or a probiotic combination of Lactobacillus rhamnosus and the BB-12 strain of Bifidobacterium.

At the end of six weeks, 88% of those on probiotics were H. pylori-negative, versus 73% in the placebo group. The difference was significant and amounted to a 21% increase in H. pylori eradication. The probiotics also attenuated intensity of symptoms like epigastric pain, flatulence, heartburn, bloating and diarrhea. The data were reported at Digestive Disease Week 2014 in Chicago.

The second study, also presented at DDW, involved a cohort of 250 patients in a region of Turkey where H. pylori prevalence is high and efficacy of standard antibiotic regimens is low.

In an open label study, Hakan Demirci and colleagues looked at outcomes in 100 patients treated with a modified triple therapy plus bismuth subcitrate (a popular adunctive treatment in Turkey), and a similar group of 150 who were on the same regimen plus a probiotic combo consisting of (L. acidophilus, Enterococcus faecium, L. plantarum, B. lactis, B longum, and Streptococcus thermophilus).

They observed complete eradication of H. pylori in 78% in the probiotic group, and 69% in modified standard therapy. This amounted to a 13% improvement in cure rates, a small but significant difference.

In his summary of the DDW presentations for Medica/ConsultantLive, Dr. Jeffrey Hertzberg, MD, noted that prior to these new studies, the European Helicobacter Study Group supported the use of probiotics as an adjuvant, but only for reducing antibiotic-related side effects, not as a method of improving cure rates.

He added that, “if probiotics work, they’re likely to be safer than most allopathic treatments, since they are naturally-occurring nonpathogenic bacteria used to replace or supplement a dysfunctional microbiome. Based on the number of presentations at Digestive Disease Week 2014 that mentioned or focused on probiotics, I’d suggest that the gastrointestinal specialty community is taking this very, very seriously.”

For other clinicians, the question is whether standard drug therapies are really the best way to deal with symptomatic H. pylori.

“Effective, but damaging,” is how Jill Carnahan, MD, described conventional “triple therapy.” Speaking at a symposium on functional medicine for gastrointestinal conditions sponsored by the American Academy of Anti-Aging Medicine (A4M) and Ortho Molecular Products, Dr. Carnahan noted that the most “curative” regimens are also the ones with the heaviest burden of adverse effects and the most damaging to the healthy gut flora.

Based at Flatiron Functional Medicine in Boulder, CO, Dr. Carnahan said that she reserves drug-based triple therapy only for patients with very severe symptoms.

In all other cases she starts with a natural “quadruple” combination consisting of:

She finds the combination to be effective in controlling—and in some cases, eradicating—H. pylori in patients with moderate symptom burdens, allowing her to use the pharma approach only when it is really necessary.

“Many physicians don’t realize that mastic gum has been shown to be bacteriocidal against H. pylori.”

Zinc carnosine, a crystalline chelate compond of L-carnosine and zinc developed by Japanese researcers, has several properties that make it a good option for people with peptic ulcer disease. It is an antioxidant, promotes tissue repair and mucosal wall integrity, and attenuates mucosal inflammation.

It also inhibits proliferation of H. pylori by inactivating urease, an enzyme that the pathogen uses to create an ammonia-rich protective bubble around itself.

Clinical studies in Japan—where zinc carnosine is regulated as a drug—show ulcer resolution rates of 60%-70% with zinc carnosine given as a monotherapy, a benefit comparable to that obtained with drug therapies, but with fewer adverse effects.

“I love it,” said Dr. Carnahan of the product. “In China and Japan they use this in hospitals to treat acute peptic ulcers.”

While symptomatic H. pylori infection is, in and of itself, a problem requiring treatment, Dr. Carnahan stressed that it may also be a harbinger of other conditions warranting attention.

The precise nature of the relationship between H. pylori and these other disorders is unclear: it may play some role in causation, but on the other hand presence of a severe H. pylori infection may be one of several net results of an autoimmune milieu characterized by systemic inflammation in multiple organ systems.

The point is not to get overly focused on the stomach bug to the exclusion of the wider physiological context.