The Myths & Realities of Precocious Puberty

In a recently overheard conversation, someone said: “Did you know girls are going into puberty earlier? It is from all of the hormones in the meat they eat.”

Other people, reflecting on the same theme pointed the finger at soy. Still others attribute the problem to “endocrine-disrupting” compounds in our food, cosmetics and household products.

The point here is that early puberty—especially in girls—has become a topic of mainstream conversation, one that has raised significant concern for many parents, and everyone has a pet theory about what’s to blame.

The downward shift in female pubertal age has been well documented epidemiologically, and in recent years it has received considerable media attention.

But is it really a new phenomenon?

With their recent book, The New Puberty: How to Navigate Early Development in Today’s Girls, coauthors Julianna Deardorff, PhD, and Louise Greenspan, MD, attempt to shed greater light on this phenomenon, while dispelling some of the misinformation as well as the anxiety that has gathered around it. 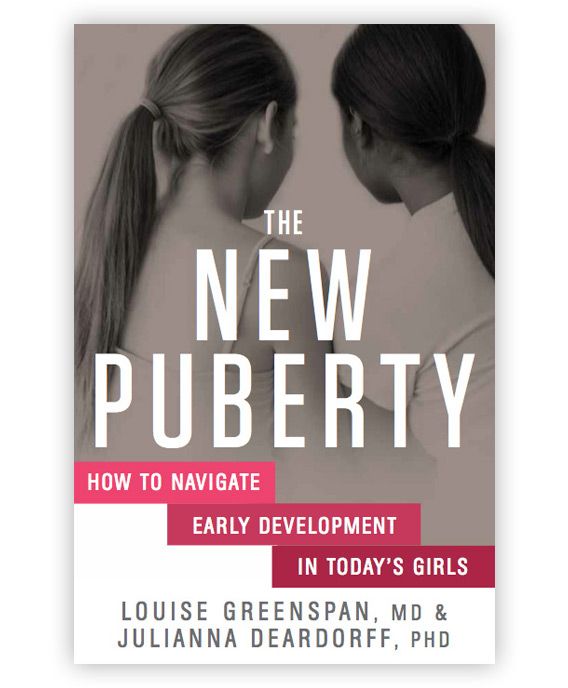 According to Deardorff and Greenspan, the age of puberty has been declining for as long as documentation has existed. It’s nothing new.

For example, in the late 1860’s women did not experience their first menstrual periods until around age 16. By the 1920’s, that age had decreased to 14. Currently the age for first menarche is roughly 12.5 years, which is down from 12.75 two decades ago.

The authors speculate that this decline is a net result of increased access to more nutrient-dense foods over the last 150 years, including foods high in fat such as dairy products.

Although the trend has slowed significantly over the past few decades, public awareness of the phenomenon has increased. So has public anxiety.

The onset of puberty, although typically defined by the first menstrual period, actually begins years prior to that. The stages of puberty are recognized as breast budding, pubic hair development, growth spurt, and finally menarche.

The initial public alarm bell about “girls growing up too soon,” was set off by a 1997 study by Marcia Herman-Giddens in the journal, Pediatrics. Her research showed that breast budding was occurring with higher than anticipated frequency in young girls.

Normal puberty is defined by the National Institutes of Health as puberty that begins naturally in girls 8-13 years old. Early puberty in girls refers to development prior to 8 years old. As a reference point, both Greenspan and Deardorff participated in a study, published in Pediatrics in 2013, showing that less than 5% of girls began puberty before the age of 8 only one generation ago.

Now, 18% of Asians and Caucasians, 43% of African Americans, and 31% of Spanish girls begin puberty before turning 8.

But the age of menarche has decreased only very slightly in the past few decades.

Thus, the early puberty phenomenon reported in recent years is not so much a reflection of decreasing menstrual age, but rather an increased incidence in early breast development. This means that there is now a wider interval between the onset of breast budding and puberty’s culmination as menarche.

In short, puberty is lasting longer these days.

In The New Puberty, Deardorff and Greenspan detail two types of early puberty:

When signs of development present themselves before age 8, it is important to try and determine the cause.

If onset was triggered by the hypothalamus and pituitary, it is considered Central Precocious Puberty. An x-ray of the wrist can confirm this by determining the child’s physiological age from measurements of the growth plates. If the hypothalamus and pituitary are prematurely active, the x-ray determination of physiological age will suggest that the girl is older than she is in actuality.

In these cases, a precautionary MRI makes good sense, to rule out abnormalities such as brain tumors affecting the pituitary or hypothalamus. In the majority cases, there are no such findings.

In very few cases, if the girl is extremely young or puberty rapidly progresses, it may make sense to consider medicating with GnRH analogs, which block GnRH and halt the progress, as very early development can prevent a full growth spurt from occurring and leave the child with a short stature.

In addition, all of the emotional and psychological impacts of very early development may weigh in favor of the drug route.

Early pubertal development is not without consequences. It has been linked to many negative outcomes later on in life such as anxiety, depression, eating disorders, and unwanted behaviors such as early sexual experiences, smoking, drinking, drug use, and having older friends who can influence such behaviors.

In addition, there is an increased rate of breast cancer, ovarian cancer, cardiovascular disease and all-cause mortality.