What to Do When Patients Demand Unnecessary Antibiotics

It’s a common clinical scenario—especially this time of year.

A patient comes in with a respiratory infection—most probably viral—and requests–make that demands–a Z-Pak, saying that he cannot afford to be absent from work, and that antibiotics have “always worked” well in the past. 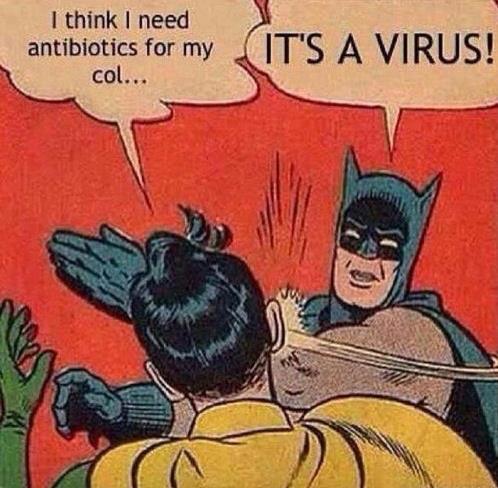 Somehow, the patient’s insistence combines with the physician’s desire to please, and before you know it, the prescription pad is out, the ‘script is written, and the patient is en route to the drug store to pick up a course of azithromycin that is probably not medically necessary.

If you’ve found yourself in this situation and prescribed antibiotics against your better judgment, you are definitely not alone. According to a WebMD/Medscape survey published last June 95% of nearly 800 US health care practitioners said they sometimes prescribe antibiotics when they are not clearly necessary.

That, says Sarath Malepati, MD, is part of the reason why we now have roughly 2 million drug-resistant infections annually in the US, resulting in 23,000 deaths.

“I’ve had patients infected with super-bugs. I’ve had patients die from resistant C. difficile colitis. When you see something like that, it really changes your perspective,” said Dr. Malepati, at Holistic Primary Care’s 6th Annual Heal Thy Practice conference in October.

A general surgeon based in Los Angeles, Dr. Malepati believes it is urgent that clinicians confront the antibiotic overuse issue before it gets completely out of hand.

Respondents in the WebMD survey cited a variety of reasons for acquiescing to patients’ demands: erring on the side of caution when an infection might be bacterial; malpractice concerns; a perception that antibiotics “couldn’t hurt,” and just might help; and a desire to help the patient avoid being absent from work.

During his presentation entitled, The Antibiotic Problem: Our Problem, Our Responsibility, he acknowledged that, “Patients often pressure us to prescribe. They get angry if we don’t give them their Z-Paks. But upsetting patients and being afraid of losing business is not a good reason for doing something you know is wrong.”

Dr. Malepati has developed a strategy for dealing with patients’ inappropriate demands, in the form of a research-backed combination of immune-support nutrients and herbs specifically designed for patients who seek Z-Paks.

“Eighty percent of upper respiratory infections are caused by viruses, and cannot be treated with antibiotics which only work on bacteria,” he reminded Heal Thy Practice attendees. “My interest is in engaging other clinicians interested in participating in our continued research and improving antibiotic stewardship.”

The phenomenon of patients pushing for prescriptions is on the rise, driven in part by direct-to-consumer drug advertising, the patient empowerment movement, and online rating systems. Practitioners feel ever more pressure to please people and improve their patient satisfaction scores.

In a separate survey of 269 patients seeking antibiotics for relatively minor conditions, 85% did so because they believed the 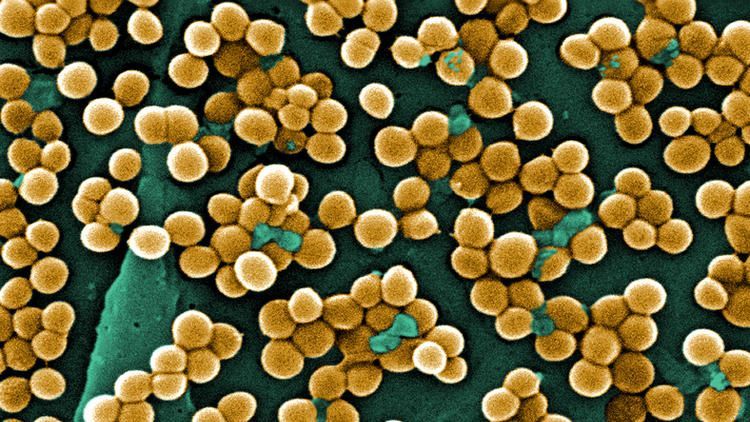 drugs would cure their illnesses, while 65% said antibiotics would help them “feel better quickly.” Forty-four percent said they “needed to get back to work as quickly as possible.”

In short, many people have a deep faith in the power of antibiotics—a faith not easily shaken.

Educating patients on the futility of using antibiotics for non-bacterial conditions and the seriousness of the antibiotic resistance issue is important. Far more effective, however, is offering them a viable alternative, which is where Dr. Malepati’s “EZC Pak” comes in.

The initials stand for Echinacea, Zinc, and Vitamin C—three ingredients that have substantial research support in the context of enhancing immune function and, at least potentially, attenuating common colds and respiratory infections.

The regimen is cleverly packaged to follow the schedule of the familiar azithromycin Z-Paks: on Day 1, the patient takes an EZC capsule four times per day (every 6 hours); on Day 2, it’s thrice daily (every 8 hours), and on Days 3-5 it is twice daily (every 12 hours).

“This is a physician-directed regimen. The formula is based on the best available evidence and sourced from the highest quality ingredients, including certified organic Echinacea,” said Dr. Malepati, adding that the ingredients are contained in vegetarian capsules.

He noted that Echinacea has been shown to stimulate T-cell activity, as well as IL-10 antiviral immune response. Clinical trials with various types of Echinacea have yielded mixed results in the context of upper respiratory infections. The best data is for Echinacea purpurea (the type used in EZC Pak), which is most efficacious when taken within 48 hours of symptom onset.

A 2006 systematic review by Linde looking at 16 studies of Echinacea for preventing and treating common colds showed that while there was no overall effect over placebo for prevention, there was a significant treatment effect in 9 of the 16 trials, and a non-significant trending effect in one (Linde K, et al. Cochrane Database Syst Rev. 2006; 1: CD000530)

Shah and colleagues did a metanalysis of 14 Echinacea studies, and concluded that the herb reduced the incidence of common colds by roughly 60%, and cut the duration of cold symptoms by a mean of 1.4 days (Shah SA, et al. Lancet Infect Dis. 2007; 7(7): 473-80). 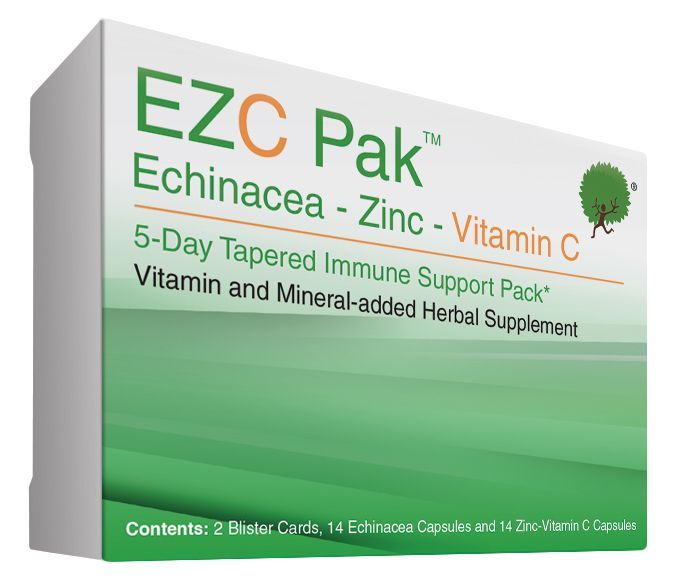 “Overall, Echinacea is very safe and well tolerated. In the majority of patients it’s not going to hurt, and as an immunostimulator, it may in fact help,” Dr. Malepati said. The only contraindications are in patients with known ragweed or daisy allergies, severe liver disease, immune system or connective tissue diseases, kids under age 12, and pregnant or lactating women.

For zinc, most clinical studies weigh squarely in favor. The most positive data are for the zinc acetate form, taken within the first 24 hours of cold symptoms. At doses of 50-100 mg daily over a 5-day period, zinc acetate does seem to reduce the duration and severity of illness (Singh M, et al. Cochrane Database Syst Rev. 2013; 6 CD001364).

Vitamin C has been shown to modulate the activity of several types of immune cells involved in clearing viruses and bacteria; it also increases production of IL-1, TNF-α, and IFN-γ, all of which are involved in stimulating immune response to pathogens.

As with Echinacea, the clinical data is mixed for vitamin C in preventing or treating colds, but there are some positive trials.

It seems to be most effective when people are under heavy physical stress. In a 2007 systematic review, Hemila and colleagues noted that supplementation reduced the incidence of colds by up to 50% in marathon runners, children exposed to cold climates, and soldiers on winter exercises. Overall, supplementation reduced colds by 8% in adults, and 18% in kids (Hemila H, et al. J Royal Soc Med. 2007; 1000(1): 495-498).

Dr. Malepati stressed that EZC Pak is not a substitute for antibiotics when they are truly medically necessary. Rather, it is an alternative for situations when antibiotics are most likely not necessary.

“The idea is to relieve patient pressure for unnecessary prescriptions,” he explained. By giving clinicians something they can offer instead of Z-Pak, his product provides an opportunity for educating patients about the personal and public health risks of antibiotic misuse, while giving them something to boost their immune systems.

Though EZC Pak has not yet undergone formal clinical trials, Dr. Malepati said several researchers have expressed interest in studying the product.

He is also collecting data from 50 of his own patients; 30 have reported in so far. “We’ve seen 90% symptom resolution within 3 days, and 93% resolution within 5 days. None of these patients needed prescription antibiotics.”

How did patients like the EZC Pak? “We’ve had near universal gratitude. Only one refused to take the product.”

Through his company called PPC Group , Dr. Malepati is making EZC Pak available to the wider clinical community. At a suggested patient price of $19.99, it is considerably less expensive than azithromycin—even the generic version. In many cases, it is also a much more appropriate choice.