Glyphosate: A Root Cause of Chronic Inflammation?

That breadbasket people love to dig into in their favorite restaurants? If the bread is not organic, it is likely soaked in glyphosate.

The weed killer, the active ingredient in RoundUp®, was first patented and introduced by Monsanto in 1974 for

agricultural use. Later it was marketed to consumers as a household herbicide. It is sprayed in staggering quantities on most commercially grown staple crops, including wheat, corn, soybean, beet, cotton, canola, and alfalfa.

Since last year, when the World Health Organization classified glyphosate as a “probable human carcinogen,” there has been a lot of media coverage of the potential health risks associated with the use of this herbicide.

What many people do not know is that since 1992, glyphosate has also been widely used as a “ripening agent” or desiccant on wheat and many other grains. This application stresses or kills the plants, to accelerate drying and speed the ripening of the grain immediately before harvest.

Desiccating wheat with glyphosate is particularly common in years with wet weather and has been increasing in Upper Midwestern states in the US, as well as in areas of Canada and Scotland (where the process began). This pre-harvest application means there’s even more glyphosate residue on the grain by the time it reaches market than there would be if the compound had only been used as an herbicide during the growing process. 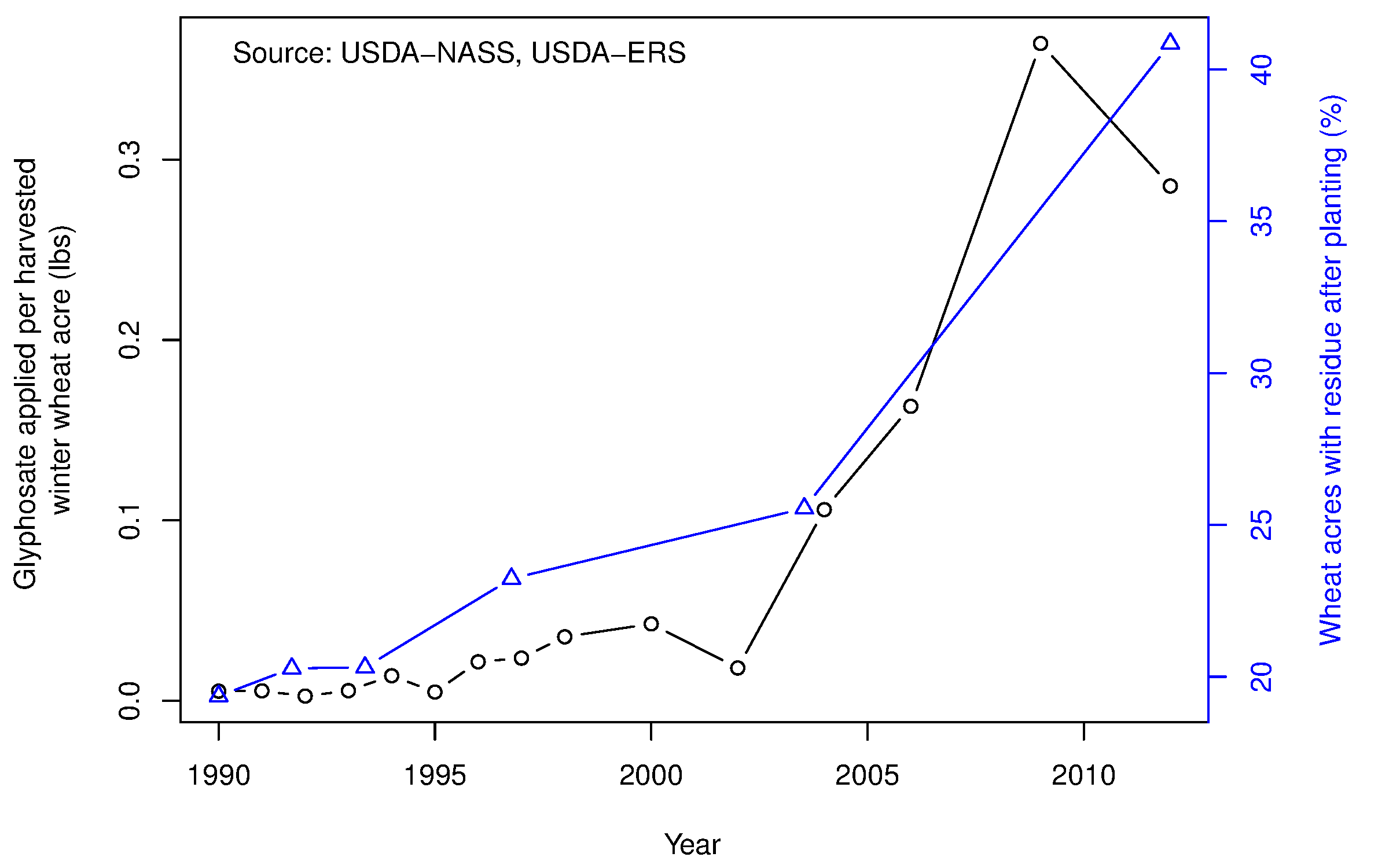 In addition to wheat, glyphosate is also used as a dessicant on oats, rye, lentils, peas, flax, potatoes, buckwheat, and millet.

In our lab in Virginia, we have been testing glyphosate levels in common foods. The amount of glyphosate estimated in one slice of ordinary pizza is roughly 10 ppm. That, in addition to the gliadin protein from the gluten in the crust, is enough to degrade human intestinal tight junctions in cell culture almost immediately upon contact.

Safer Than Salt? Not!

According to Anthony Samsel and Stephanie Seneff, gluten intolerance and Celiac disease now affects an estimated five percent of the population of North America and Europe. Symptoms include nausea, diarrhea, skin rashes, macrocytic anemia, and depression.

It is also associated with numerous nutritional deficiencies as well as reproductive issues and increased risk to thyroid disease, kidney failure, and cancer. An amazing graph in their article shows the sharp rise in usage of glyphosate on US wheat in the last decade, in step with the sharp rise in the incidence of Celiac disease (Samsel A, Seneff S. Interdiscip Toxicol. 2013 Dec; 6(4): 159–184).

Samsel and Seneff propose that glyphosate, “is the most important causal factor in this epidemic.”

In 1996, New York’s attorney general sued Monsanto over the company’s use of “false and misleading advertising” about RoundUp. That case ended with Monsanto agreeing to stop calling Roundup “biodegradable,” and to pull ads claiming that Roundup was “safer than table salt,” “practically nontoxic,” and “stayed where you put it.”

Glyphosate was “classified as probably carcinogenic to humans,” according to a recent report from the International Agency for Research on Cancer (IARC), the World Health Organization’s France-based cancer research arm.

The state of California has also moved to classify the herbicide as a probable carcinogen. A growing body of research is documenting the detrimental effect of glyphosate as an endocrine disruptor. The substance also kills beneficial gut bacteria, damages the DNA in human embryonic, placental and umbilical cord cells, and is linked to birth defects and reproductive problems in laboratory animals.

One Pound Per Person

Monsanto introduced glyphosate following the ban on DDT. The company started selling it direct to consumers in the 1980s. Since that time, agricultural and consumer use have both skyrocketed, washing out of our driveways, our lawns, and our croplands and into our water systems.

In 1996, Monsanto debuted the first genetically engineered glyphosate-resistant “RoundUp-Ready” crops — corn and soybean. Now the whole crop could be sprayed throughout its lifecycle to prevent weeds, and increase crop yield. With each passing year more acres of wheat, corn, soybean, beet, cotton, canola, alfalfa, and other staple crops are sprayed with glyphosate.

Glyphosate is dumped on us at the rate of 300 million pounds per year, almost one pound for every person in the US, according to an article in Newsweek.

Estimates are that 75% of rainwater is contaminated by glyphosate, according to EcoWatch. The US Geological Service reports that more than 88,000 tons of glyphosate were used in the US in 2007, up from 11,000 tons in 1992. Since the advent of “super weeds,” the use of glyphosate has risen significantly.

Globally, glyphosate use has risen almost 15-fold since Roundup-Ready crops were introduced in 1996.

Reuters reported that researchers found residues of glyphosate in an astounding 41 of 69 honey samples, 10 of 28 samples of soy sauce, three of 18 breast milk samples and six of 40 infant formula samples.

In the intestines, glyphosate is a profound zonulin stimulator. It damages the epithelial tight junction tissue on contact, weakening the barriers that protect us on the inside from the barrage of other environmental toxins to which we are exposed. Injury to the tight junction membrane in the gut can lead to intestinal permeability.

The zonulin production initiated by glyphosate exposure quickly becomes systemic; injury to the tight junction membrane in the brain can result in a breakdown of the blood-brain barrier and a host of neurological symptoms.

With the collapse of the tight junction firewalls, all organ systems go under duress. Just behind that microscopically thin layer of protection of the endothelial cells that separate you from the outside world is the gastrointestinal lymphatic tissue (GALT). The GALT is a layer of immune cells that are vigilantly standing guard to address any breach in your firewall. It is estimated that 60-70% of the immune system, and more than 80% of the antibodies that the immune system produces, originate in the GALT.

The acute inflammatory response becomes chronic inflammation as the system is overwhelmed with toxins from the outside world.

The gliadin protein in gluten also stimulates release of zonulin. I agree with William Davis, MD, author of Wheat Belly, who holds that, “When gliadin triggers zonulin release, intestinal tight junctions are disrupted, and unwanted proteins …gain entry to the bloodstream. Immune-activating lymphocytes, such as T-cells, are then triggered to begin an inflammatory process against various ‘self’ proteins, thus initiating …conditions such as celiac disease, thyroid disease, joint diseases, and asthma.”

Glyphosate enhances the damaging effects of other food-borne chemical residues and environmental toxins. Negative impact on the body is insidious and manifests slowly over time as inflammation damages cellular systems throughout the body (Samsel A, Seneff S. Entropy. 2013: 15(4): 1416-1463)

Genetically-engineered or genetically-modified organisms (GMOs) are live organisms whose genetic components have been artificially manipulated through creating unstable combinations of plant, animal, bacteria, and even viral genes that do not occur in nature, or through traditional crossbreeding methods.

In the US, 88% of the corn crop, 93% of the soybean crop, 90% of sugar beets (accounting for 54% US sugar production), and 94% of cotton are genetically engineered to be able to survive the application of glyphosate. Consequently, they can be sprayed heavily with glyphosate to control weeds and simplify harvest.

What this means is that much of the US food supply is contaminated even prior to harvesting – think of the corn, soy, and their oils, and beet sugar used in processing packaged foods. Additionally, factory-farmed livestock fed corn and soy products concentrate the glyphosate in their flesh, further contaminating the food supply chain.

Alfalfa, is the fourth largest crop in the US, and one that is widely used as feed for dairy cows. The cows concentrate the toxin in their milk, meaning that conventional dairy products have high levels of glyphosate originating from the alfalfa.

The Moms Across America Study

Several years ago, a group of concerned mothers calling themselves Moms Across America, commissioned a study looking to determine levels of glyphosate in breast milk.

Contrary to industry assertions that glyphosate did not bio-accumulate, the MAA study discovered the reality of elevated levels of glyphosate in breast milk. Samples from some women revealed glyphosate in levels of 76 μg/L to 166 μg/L. As reported by The Detox Project, this is 760 to 1,600 times higher than the EU-permitted level in drinking water (although it’s lower than the US maximum contaminant level for glyphosate, which is 700 μg/L).

How to Best Avoid Glyphosate

Here are some recommendations I give to my patients for avoiding exposure to glyphosate:

Animal-derived foods pose complex issues for people trying to avoid environmental toxins. Animals fed and fattened on corn, soybean, and alfalfa feed are basically accumulating and concentrating glyphosate, as well as other toxins including animal antibiotics. This holds true for non-organic dairy products as well, which also concentrate glyphosate in cows’ milk.

Our company, Biomic Sciences, has developed a product called Restore™, a liquid mineral supplement that supports tight-junction integrity. We have been doing a number of interesting studies. One of them, which will be published later this year in a peer-reviewed journal, shows that glyphosate and the gliadin protein found in gluten appear to have a synergistic negative effect.

Previously, our team had been thinking glyphosate had the same effect on epithelial tissue as gliadin, just much more severe.It now appears that the combination of gliadin and glyphosate does much more damage than either one alone. Our lab results have shown that the synergy between gluten and glyphosate decrease the efficacy of the tight junction barrier by an additional 52% vs either gluten or glyphosate alone.

Check out our website, restore4life.com, to see a video presentation of how Restore™ supports human intestinal tight junction cells in the presence of gliadin and glyphosate exposure.

Zach Bush, MD, is medical director of a new, integrative medicine practice in Charlottesville, Va. He is also the founder of Biomic Sciences, a nutraceutical company that recently launched Restore, a unique supplement product that can support the repair of the gut wall by reestablishing proper tight-junction function.