A cohort study representing more than 64,000 people found that those with allergies to grass, plants and trees were slightly more likely to be diagnosed with a hematologic malignancy such as leukemia and lymphoma, than those who don’t have the allergies. 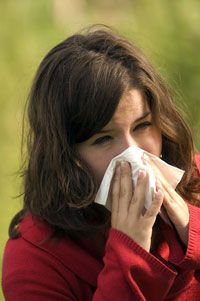 People with these common allergies were 1.27 times as likely to be diagnosed later with a hematological malignancy than those who were not allergic to the flora. The data were drawn from the Vitamins and Lifeclass (VITAL) cohort study, and presented as a poster at this year’s annual meeting of the American Society of Clinical Oncology (ASCO) in Chicago.

These findings run contrary to past review articles and case control studies, which found an inverse association between allergies and hematologic cancers, according to Mazyar Shadman, MD, MPH, a fellow at the University of Washington’s Fred Hutchinson Cancer Research Center in Seattle.

“The theory was that when people have more active immune systems, they have less cancer, but when you look at other types of studies, such as cohort studies like this one, you don’t see that effect,” said Dr. Shadman, the lead author on the paper.

He and his colleagues analyzed data from more than 64,000 people who completed a questionnaire as part of a previous study examining vitamin usage (the VITAL cohort). The responders were between ages 50 and 76, and answered questions between 2000 and 2002 concerning their current allergies, their histories of physician-diagnosed asthma, and other disease indicators.

Those who completed the VITAL questionnaire were then cross-matched with the national Surveillance Epidemiology and End Results (SEER database), an NCI database to which most states have to report the incidence of cancer, enabling the researchers to determine which of the VITAL subjects had developed cancer.

“It’s very difficult to follow patients for 20 years and see who gets cancer, but with SEER, the database has their social security number, and we can see which people actually develop cancer,” he explained.

As of 2009, 680 patients from the VITAL database (1.03%) were diagnosed with hematologic cancers, according to Shadman. Of those, 262 had mature B-cell neoplasms, 107 had chronic lymphocytic leukemia, 41 had acute myeloid leukemia, and 23 had Hodgkin lymphoma, among others.

While the history of any allergies at all was associated with a 1.21 times greater risk of having a

No Cause for Alarm

Researchers did not reach a definitive conclusion as to why the plant allergies have an association with certain forms of cancer, but the abstract hypothesized a “possible carcinogenic role for chronic stimulation of the immune system.”

“We don’t want to give the message that people with a history of allergies want to worry. It doesn’t mean they need to get bone marrow biopsies, blood work, or anything different,” Dr. Shadman said. “In general, the only way to prove something clinically is with a clinical trial. Future research looking at biomarkers would be very interesting, but nothing has been started yet,” he added. The abstract also noted that further investigations of possible gene effect modifiers are needed.

Data from the VITAL cohort may be useful to such a follow-up study, because researchers have access to demographic information such as gender, age, ethnicity, and questions about known risk factors, as well as access to some DNA samples.

In hypothesizing why this study came to a different conclusion than previously published case-control studies looking at the subject of allergies and cancer, Dr. Shadman ventured to say that the current trial was more carefully designed than a case-control study. He added that a patient in the VITAL cohort was considered as having allergies only if he or she was currently being treated for them, or if he or she reported experiencing allergies for at least half the days of the past year.

“In a case-control study you look at a cancer patient, and ask them, did you have any history of allergies ten years ago? There is a risk of them not remembering what happened ten years ago. For example, if they have a diagnosis of cancer, they may be prone to different kinds of biases. Some people might have some minor symptoms, and just report them as allergies, but we don’t want to include people who don’t have the diagnosis,” he explained.

Difficulty in follow-up and subjective responses likely contributed to the contrary result of previous case-control studies.

Emily White, PhD, the lead author on the original VITAL study, has published numerous studies from the VITAL cohort looking at the effects of vitamins and supplements on health. White was also a co-author on the current ASCO study.