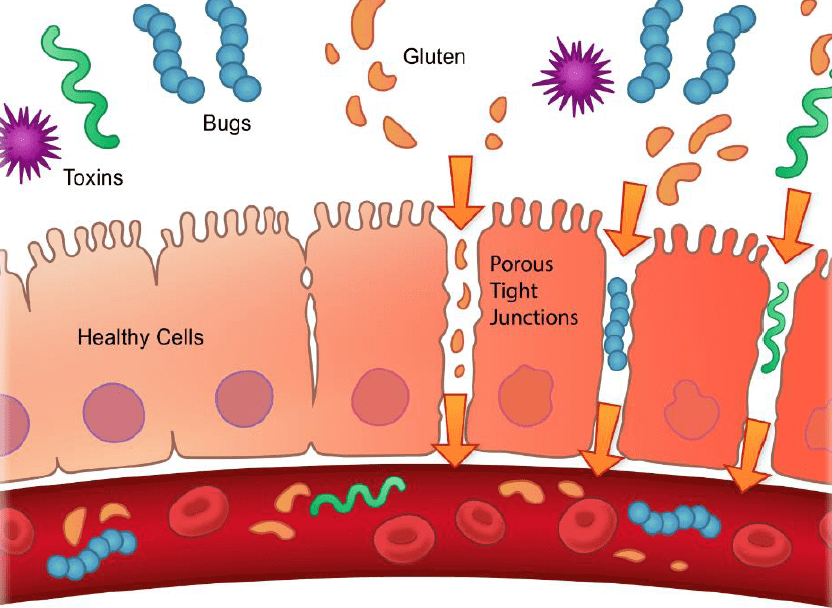 Leaky gut syndrome has been getting a lot of attention during the last several years for its role in the etiology of chronic conditions like inflammatory bowel syndrome (IBS) and even diabetes. But is there a connection between leaky gut and the heart?

Cardiologist Dr. Jack Wolfson thinks so. In fact, he thinks all roads that lead to chronic disease more or less begin in the gut.

Leaky gut, formally referred to as intestinal permeability, is a condition in which the tight junctions that regulate what goes in and out of the gut have been compromised. Many integrative medicine experts hold that this permits toxic or allergenic substances to cross from the gut lumen into the bloodstream where they don’t belong, setting off a cascade of inflammatory events.

Most integrative medicine doctors, including Dr. Wolfson, acknowledge that the science around leaky gut is young. Research on the connection between leaky gut and the heart is in its infancy. Still, there have been some powerful findings in the last decade that warrant serious attention, said Dr. Wolfson at the 2019 Integrative Healthcare Symposium.

He suggested that in people with intestinal permeability, bacteria within the gut—or in some cases bacterial endotoxins– enter the bloodstream and are then able to infiltrate the epicardium, and become associated with endothelial plaques.

There’s also a theory that leaky gut contributes to heart disease by inducing inflammation and weakening the stability of plaques within the coronary arteries. This is important because plaque stability—or instability–is a major factor in determining risk of a cardiovascular event.

In a 2016 study published in the Journal of the American College of Cardiology, researchers discovered that patients who have chronic heart failure (CHF) are also frequently found to have increased intestinal permeability compared to healthy people without CHF.

In this study, a multi-center team of Italian researchers analyzed 60 well-nourished patients in stable condition with mild or moderate to severe CHF, and matched them with 20 healthy control subjects. In all subjects, they measured the presence and development in the feces of bacteria and fungi (Candida species). They assessed for intestinal permeability using the cellobiose sugar test.

They then correlated these data with echocardiographic measurements of right atrial pressure (RAP) and systemic inflammation.

The investigators were looking for associations between the presence of pathogenic gut flora and intestinal permeability and heart disease severity, venous blood congestion, and inflammation.

They found that patints with CHF are more likely to intestinal overgrowth of pathogenic bacteria and Candida species. Further, increased intestinal permeability was associated with CHF severity, venous blood congestion, and inflammation.

Dr. Wolfson also cited an earlier study also published in the Journal of the American College of Cardiology drew similar conclusions, albeit with fewer subjects: “Chronic heart failure is a multisystem disorder in which intestinal morphology, permeability, and absorption are modified. Increased intestinal permeability and an augmented bacterial biofilm may contribute to the origin of both chronic inflammation and malnutrition.”

In a 2013 review in the European Heart Journal, the authors pointed out that patients with inflammatory bowel diseases appear to have a higher risk for coronary heart disease despite a lower prevalence of ‘classical’ risk factors (like cholesterol), indicating additional links between the gut and the heart.

“An impaired intestinal barrier function will be followed by bacterial translocation and presence of bacterial products in the circulation, which can contribute to atherosclerosis and 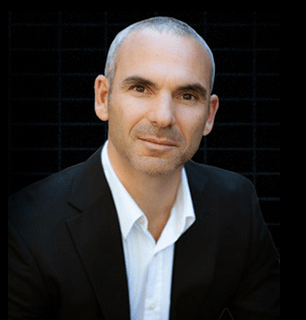 In a post written last August, Anthony L. Komaroff, M.D., Editor in Chief, Harvard Health Letter, said there is a potentially strong influence of the gut on heart health, suggesting that microbiome-produced proteins might be at least partly to blame for heart disease. “… microbiome-produced proteins get into our bloodstream, travel around our body, and affect our health. In other words, it has suddenly become very plausible to imagine that bacteria (or other microbes) living in our gut could affect other organs in our body, including the heart.”

Komaroff holds that gut bacteria can affect risk factors for heart disease. “For example, the gut microbiome probably influences whether we become obese or develop type 2 diabetes,” he said. “It also can affect the levels of LDL (bad) cholesterol in our blood, and our blood pressure.”

Dr. JoAnn Manson, Professor of Medicine at Harvard Medical School and Chief of Preventive Medicine at Brigham and Women’s Hospital, and other investigators around the country have received major grants from the National Institutes of Health (NIH) to study metabolomics for predicting the risk of cardiovascular disease and diabetes.

Metabolomics have been called a missing link that connects the microbiome with human health. “There’s a complex interplay between the microbes in our intestines and most of the systems in our bodies, including the vascular, nervous, endocrine, and immune systems. All of these relationships are highly relevant to cardiovascular health,” Dr. Manson said in the June 2018 edition of the Harvard Health Letter.

So what kinds of tests are doctors currently using to assess leaky gut? Can those tests be used to reduce risk in high risk CVD patients who are also have a leaky gut?

Of course they can, according to Dr. Wolfson.

“There is testing that identifies markers that might lead to an inflammatory state, especially in the case of leaky gut. Some of the major markers to look for include zonulin and lipopolysaccharides, as well as anti-zonulin and anti-actin antibodies,” Dr. Wolfson told IHS attendees.

Zonulin controls the “tight” intracellular junctions throughout the body — in the gut, the heart, and even the brain. It is responsible for what gets in the body in terms of food and bacteria, as well as toxins, heavy metals and pollutants. If zonulin is high, then those tight junctions loosen to allow many different substances to flow into the body that eventually end up in places they don’t belong.

In terms of the heart, zonulin controls the endothelial lining of the blood vessels, which, in turn, controls what gets into the bloodstream. Levels of zonulin are found to be higher in heart disease patients.

About lipopolysaccharides, Dr. Wolfson says cardiologists have known for years that the bacteria found in the gut are also detectable in coronary artery plaque. The higher the amount of LPS in the blood, the higher the risk for heart disease.

Actin is a protein that allows muscles to relax and contract and it is found throughout the body, including the heart. “A 2003 study showed that antibodies to actin are linked to carotid disease in your neck,” Dr. Wolfson said. “And if you have them there, then you have them in the heart.”

The presence of anti-actin antibodies is a sign that the immune system is attacking the muscles. For this reason, Dr. Wolfson believes heart disease could be considered an autoimmune condition whereby the body is attacking the heart.

So how would one go about solving the leaky gut-CHD crisis? Dr. Wolfson says testing is the first step. Once you establish which markers are most problematic for the patient, you can develop an appropriate treatment protocol. 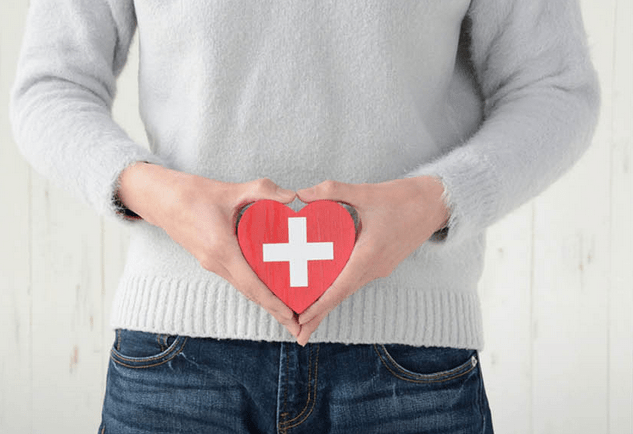 Overall, Dr. Wolfson—who calls himself the “Paleo Cardiologist”—recommends eating according to paleo principles (very high protein and vegetable intake, little to no grain-based foods, as little processed food as possible) and getting plenty of sunshine, sleep, exercise and water.

Some of the supplements he prescribes to patients include digestive enzymes, vitamin D, omega-3s, prebiotics/probiotics and glutamine. All of these things, he says, will go a long way toward repairing the gut and also the heart.

While the concept of intestinal permeability has been gaining traction in holistic and functional medicine circles, it is still questioned by many mainstream practitioners and researchers.

In fact, some corners of mainstream medicine are not convinced that leaky gut exists at all.

According to an article posted by the Canadian Society of Intestinal Research in January, “While some alternative medicine practitioners claim that leaky gut syndrome is a prevalent problem responsible for ill health in many people, most physicians maintain that there is not enough research to prove that it is a legitimate issue.”

The article went on to list several “myths” about leaky gut. “Physicians sometimes find increased intestinal permeability in those who have Crohn’s disease, celiac disease, in individuals receiving chemotherapy, and those who have a high intake of bowel-damaging substances such as aspirin and alcohol,” the authors stated. “However, intestinal permeability is a symptom of these ailments, not a cause; it does not lead to anything more than inflammation of the bowel walls, and it is not leaky gut syndrome.”

Time will tell whether the mainstream will eventually come to accept the concept of intestinal permeability. But many are hopeful that everyone will come together to solve this puzzle.

As the authors in the European Heart Journal concluded: “The interesting and innovative field of heart–gut interaction still waits for more cardiologists and gastroenterologists to collaborate on these important topics.”

And there is no time like the present to get these groups together. Perhaps integrative practitioners can be the catalysts that facilitate the connections.