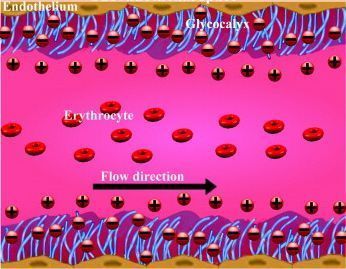 inner surface of the endothelium throughout the vascular tree, has become a new focus for reducing risk of atherosclerosis and cardiovascular events.

The glycocalyx has multiple functions: it mediates nitric oxide synthesis and superoxide dysmutation, acts as a protective “sieving” barrier, inhibits platelet adherence, and coagulation, and it regulates inflammation by preventing leukocyte adhesion to the vessel walls.

In lesion-prone areas of the vasculature, the glycocalyx tends to be thin, and glycocalyx damage correlates strongly with many risk factors for CVD, explained Hans Vink, PhD, of the Department of Physiology, Cardiovascular Research Institute, Maastricht University, Netherlands.

Speaking at Holistic Primary Care’s 4th annual Heal Thy Practice conference, Dr. Vink reviewed the growing body of evidence pointing to the glycocalyx as an important but previously overlooked indicator of vessel health and disease risk.

The endothelial glycocalyx—which is different from the glycocalyx coating intestinal microvilli—was originally discovered in the 1950s, when early electron microscopists noticed that the plasma contents of vessels did not seem to touch the luminal surface of the endothelium. The finding was confirmed repeatedly, leading researchers to conclude that something created a buffer zone between vessel contents and the luminal wall.

The functional significance of this layer, several micrometers thick and made up of polymeric glycoproteins, remained unknown until 1979 Prof. Brian Duling and colleagues at the University of Virginia began observing capillary blood filling in hamster muscle, and concluded that this layer is there to facilitate blood flow by preventing adhesion of red cells, platelets, leukocytes and lipids to vessel walls.

Think of it as a non-stick Teflon coating on the endothelial surface.

Dr. Vink, a post-doctoral associate in Dr. Duling’s lab, has spent the last 15 years developing refined methods for visualizing the glycocalyx and assessing its structure and function in health and in a variety of disease states.

One of its most important functions is to keep the endothelial wall responsive to changes in vascular fluid dynamics. The glycocalyx layer contains very fine hair-like structures that transmit changes in shear forces to the endothelium, ultimately regulating nitric oxide release. 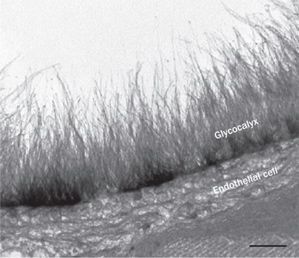 Sites of ‘low’ shear in large blood vessels tend to be the areas where the glycocalyx is thinnest, and these areas also associate with locations where atherosclerotic lesions develop.

Dr. Vink’s team in Maastricht has documented a number of important correlations between known CVD risk factors and damage to the glycocalyx.

“Glycocalyx is already thin at lesion-prone sites, and it is damaged by atherogenic factors. Glycocalyx volume is markedly reduced in people who smoke, in those with high chronic inflammation, and in people with hyperglycemia,” he said. There is also increased leakage of LDL at lesion-prone sites with thin glycocalyx (Van den Berg, Spaan & Vink. Eur J Physiol 2009, 457:1199-1206).

Glycocalyx damage results in decreased NO availability, increased oxidative stress, leakage of macromolecules, increased platelet adherence and thrombin generation, and increased leukocyte adhesion, all of which set the stage for thrombotic events.

Of considerable clinical importance is the fact that damage to the glycocalyx appears to be an early event in CVD pathogenesis. The glycocalyx may be the first-line of defense against atherosclerosis, and glycocalyx damage may be an early marker of increased vascular vulnerability.

This has implications for people at risk of diabetic retinopathy. Dr. Vink’s lab has demonstrated in human subjects that glycocalyx damage contributes to the process of retinopathy. “People with diabetes type 2 show loss of glycocalyx in retinal vessels, leading to leakage of fluids and proteins which causes tissue damage. Damaged glycocalyx correlates with increased perivascular edema and loss of capillaries. This can be repaired with glycomimetic compounds.”

The Mastricth researchers have developed a non-invasive technique for visualizing the microvascular glycocalyx. The system utilizes a microscope video camera placed under the patient’s tongue that enables a clinician to watch blood flowing through capillaries in real time, and allows assessment of what Dr. Vink terms the perfused boundary region (PBR), the distance of red blood cells from the surface of the endothelium.

He noted that PBR tends to increase with age. People over 60 typically have PBRs twice as wide as those under 45. Diabetes further accentuates this change, and people who’ve had strokes have much larger PBR than controls.

Until recently, this system known as the GlycoCheck VHM was used primarily in research settings or in intensive care and cardiology departments at hospitals, but has recently begun to emerge as an option for primary care.

Vascular Health Sciences, a Utah-based company focused on translating glycocalyx research into practical prevention strategies, has brought the GlycoCheck technology to the US, and is the exclusive North American distributor of the testing system.

Dr. Vink contends that glycocalyx damage is a reversible risk factor, arguably one of the earliest. Working with Vascular Health Sciences, he has been involved in developing a nutraceutical product called Arterosil that could potentially restore and rebuild damaged glycocalyx.

The formulation contains a seaweed extract rich in sulfated polysaccharides and glycoaminoglycans, the building blocks of the glyocalyx.

This approach was originally pioneered by Dr. Bruce A. Daniels, an Oklahoma City internist who initially postulated the concept that sulfated polysaccharides might have therapeutic benefit in improving vascular health.

While there are not yet any clinical trials, researchers at the Glycocalyx Research Group in Maastricht have shown restorative effects and prevention of lymphocyte adhesion in mice and hamsters with experimentally induced glycocalyx damage.

A preliminary study is underway, looking at glycocalyx thickness in 60 healthy human subjects randomized to placebo or supplementation with the Arterosil formula, which in addition to the seaweed extract also contains antioxidants and polyphenols extracted from grapes, oranges, black currants, apricots, green tea, olive leaf, onion, garlic and other plant sources.