Say the word “probiotics”and most people think “digestive system.” But as researchers look more deeply into the curious synergies between beneficial gut 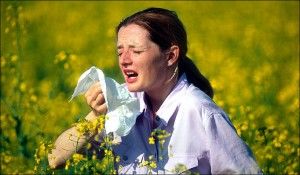 The 20 adults, all of whom had prick-test confirmed grass allergies, were randomized to take 2 g per day of a special liquid formulation of B.lactis  NCC2818 in a maltodextrin solution or a placebo maltodextrin-only solution. The active probiotic provided 4 x 109 colony forming units per day. The trial lasted for 8 weeks during grass pollen season. Researchers assessed symptom burden and cytokine release at 4 weeks and again at 8 weeks.

At the close, total nasal symptom scores declined from a mean of 4.1 to 3.0; in the B. lactis group, the score dropped from 4.9 to 1.5. The active probiotic also produced significant decreases in interleukin 5 and 13, two important Th-2 cytokines that are typically elevated in seasonal allergic rhinitis. Pro-inflammatory cytokines TNF-a and IL-1b were also reduced inthe probiotic group (Singh A, et al. Eur J Clin Nutrition; 2013: 67: 161-167).

The authors note that B. lactis appears to be an effective agent for attenuating allergic rhinitis/grass allergy but it’s not a quick remedy.  It took a full weeks of daily treatment before the immune system changes were detectable, and symptom reductions were noticeable.

The probiotic needs time to establish colonies in the GI tract and then begin influencing the immune system.

But the effect is very impressive, given that the study was done during allergy season when the subjects’ immune systems were most active and symptom burden was heaviest.

“The fact that in this challenging clinical trial setting, probiotic administration could impact on immunological parameters, mainly Th-2 cytokine levels and basophil activation, and alleviate allergic symptoms compared with placebol treatment suggests that the strain B. lactis NCC2818 should be investigated further in large-scale trials,” the Swiss team reported.

Researchers don’t know if the allergy-quelling effects of this particular strain of Bifidobacterium can be generalized to other strains or to other probiotic organisms in general, but the possibility is certainly compelling.

Probiotics in general, and Bifidobacterium in particular, have become the darlings of researchers, food executives, and clinicians alike in the last few years. French investigator Remy Burcelin recently showed that a different strain of B.lactis (B420) could blunt the detrimental metabolic effects of a high-fat diet in diabetes-prone lab animals.

DuPont researchers, drawing on Burcelin’s work, are looking at the possibility that B. lactis can prevent the progression of metabolic syndrome to type 2 diabetes.