With the growing popularity of Ayurveda, an increasing number of Americans are discovering the health benefits of the herbs that play essential roles in this millennia-old system of healing.

It is impossible to even scratch the surface of this venerable medical tradition in a brief article like this, but 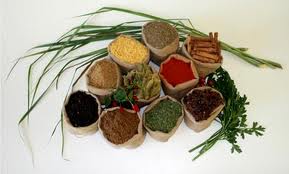 it is within our reach to offer a respectful nod to the enormous pharmacopeia of Ayurvedic herbs, and to explore a few of the more well-known ones that are finding their way into American medicine cabinets.

As we in the Western world develop our own “science of longevity” based in the undeniable strengths of modern research methodology, it makes sense to take a serious scientific look at botanical medicines already known to be efficacious through thousands of years of practice. Ayurveda provides much wise counsel on, “how life works best” (Read Ayurveda in America: How India’s Ancient Health Sciences Can Heal American Medicine from our Spring 2011 edition.)

There’s an idea in Ayurveda that, “What heals, also prevents.” Herbs effective in treating specific conditions can also serve as a “food,” providing targeted nourishment to specific physiological systems and processes. For example, Turmeric (Curcuma longa), popularized for its anti-inflammatory properties, can also be eaten as a culinary spice by people looking to proactively prevent disease and maintain good health. That’s not the case with allopathic pharmaceuticals!

Another key Ayurvedic idea is that there is synergy in nature. This is important to keep in mind as we isolate and study the specific constituent compounds in herbs. While it is useful to understand the properties of individual plants, be aware that herbs typically have multiple rather than single effects. In Ayurveda, as in other systems of Asian medicine, herbs are seldom used in isolation. Rather, they’re combined in standardized but individualizable formulas designed to balance and harmonize the properties of the constituent herbs.

Ayurvedic herbs are used for many reasons: to maintain overall health; to boost immunity; support mental clarity and focus; to calm the nerves; to improve digestion; to protect the body from toxins and support the detoxification process; and to support innate healing processes.

The following six herbs have long histories of traditional use in Ayurveda, and they are increasingly popular with American consumers:

ASHWAGANDHA (Withania somnifera):  The name of this shrub roughly translates as, “Strength of a 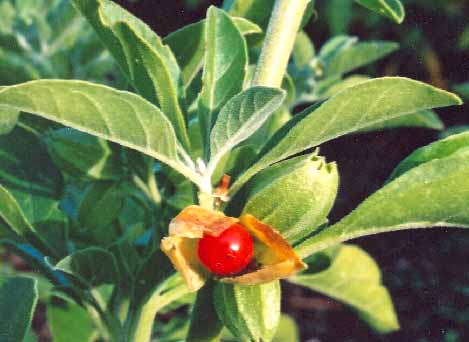 horse.” It’s roots have been medicinally used for thousands of years. In classical Ayurveda, the described properties of Ashwagandha include: Medhya (promotes intellect and cognitive development), Balya (increases strength and recovery), Rasayana (rejuvenator or life-extending substance) and Nidrajanana (promoter of sleep).

Today, Ashwagandha is best known for it’s ability to promote energy and stamina without stimulating the heart. As a body-balancing herb, it also addresses insomnia.

Preliminary research suggests Ashwagandha may suppress stress-induced changes of dopamine receptors in the corpus striatum, which may play a role in the development of chronic anxious behaviors (Upton R, ed: Amer Herbal Pharmacopoeia 2000:1-25.).

Ashwagandha may also have a GABA (gamma-aminobutyric acid) mimetic action, which could account for some of its sedating and anticonvulsive properties. This would be in accord with its historical use for insomnia and anxious neurosis (Kulkarni SK, et al. Indian J Exp Biol. 2008 Jun;46(6):465-9.) 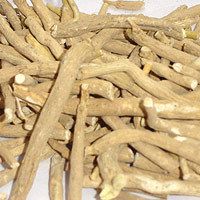 Ashwagandha has also been shown to increase production of thyroid hormones T4 and T3 while simultaneously increasing hepatic glucose-6-phosphatase activity and reducing hepatic lipid peroxidation in animal models (Panda S, Kar A. J Pharm Pharmacol. 1998 Sep;50(9):1065-8).  As we learn more about the co-morbidities between hypothyroidism, hypercholesterolemia and diabetes, Ashwagandha may one day play an important role in the management of these inter-related conditions.

Most commonly, Ashwagandha is dispensed in doses of 500 mg once or twice daily, before meals. Maximal responses are generally seen within 2-4 weeks of regular use.

BITTER MELON (Momordica charantia): This edible gourd should be every physician’s “go-to” plant

for the 16 million or more Americans with high-normal glucose readings or ‘boderline diabetic/metabolic syndrome patients.

Bitter Melon increases insulin output from the pancreas, and it also provides a unique compound called polypeptide-P, which is an insulin mimetic with a similar structure to bovine insulin (Krawinkel MB, Keding GB. Nutr Rev. 2006;64(7 Pt 1):331-7).

Compounds produced by this intriguing gourd have been shown to reduce triglyceride levels in a dose-dependent manner in animal trials (Jayasooriya AP, et al. J Ethnopharmacol. 2000;72:331-6). Though we don’t yet have human data corroborating this effect, the animal studies suggest that bitter melon may have a role in reducing cardiovascular risk, particularly in people with diabetes or metabolic syndrome.

Bitter melon products are typically standardized to their constituents, momordicosides and charantin, and usually dispensed in 500-600 mg doses, twice daily, following meals.  As it does have an insulin mimetic action, it may be necessary to adjust the dose of concurrently prescribed hypoglycemic drugs.

HOLY BASIL (Ocimum sanctum): Also known as Tulsi, this plant is actually considered sacred by many people in India. As such, it can be found growing in temple gardens, where the rich fragrance opens respiratory passages and some say, help the spirit soar.

Holy Basil’s key compounds, including eugenol and caryophyllene, are similar to those found in oregano

This plant is also native to West Africa. In Sierra Leone, it is called ‘Fever Plant.’ The various fixed oil compounds found in the plant have shown extensive antimicrobial and antifungal activity against a variety of pathogens including Escherichia coli and Candida albicans. In classical Ayurveda, Holy Basil was used as an anti-tussive, to clear “excess dampness in the lungs.” Recent human trials have validated this, the data showing that this herb can increase lung capacity as well as reduce labored breathing.

It has also been shown to significantly reduce several measures of stress in generalized anxiety disorder (GAD) patients.

Holy basil can be taken in capsule, tea and in liquid forms. It is dispensed in 600-700 mg doses, twice daily, before meals. Allow 2-4 weeks for optimal results.

TURMERIC (Curcuma longa) is one of Ayurveda’s true treasures. Consumption of the bright yellow rhizomes of this plant was first advocated in millennia past by yogis who claimed it enhanced flexibility and joint integrity. In recent years, a vast amount of research has been done on Turmeric’s main components curcuminoids and curcumin. These compounds have been shown to provide many diverse benefits for human health, including preservation of brain function, high antioxidant activity, regulation of inflammation in conditions like rheumatoid arthritis, and cancer prevention.

Turmeric also reduces thromboxane synthesis, meaning that it can reduce vasoconstriction as well as platelet aggregation. Turmeric has shown unparalleled antioxidant activity. It is interesting to note that routine consumption of Turmeric can significantly increase vitamin E plasma levels within 90 days.

Although much more data is needed to corroborate the suggestion that Turmeric is a cancer preventive, early-stage studies have shown extensive chemopreventive value. It is also a potent growth inhibitor in several tumor cell line studies (Read, A Golden Wonder: Turmeric Compounds Trigger Apoptosis in Lymphoma, Lower LDL Cholesterol from our Spring 2007 edition).

Due to poor bioavailability, it is best to use standardized Turmeric extracts, which are available at 95% curcuminoid content. Conservative dosing starts at 600-700 mg once or twice daily, after meals. Some trials have used doses as high as 2-3 g/day in chronic conditions.  However, higher doses can cause minor GI complaints.

TRIPHALA: A common element in many Ayurvedic protocols, Triphala is not one plant, but three. The 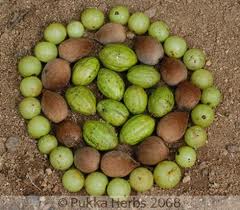 Sanskrit word actually means “three fruits,” (tri = three, phala = fruit), and it represents the combination of Emblica officinalis, Belleric myrobalan and Chebulic myrobalan. This standardized combination has existed in Ayurveda for thousands of years, and as such, it is considered as a single entity.

Use of Triphala is based on a key tenet of Ayurvedic theory, that disease is most able to take hold when digestion is compromised.  As such, two major formulas were created to normalize digestion and prepare the groundwork for overall wellness: Triphala and Trikatu (which we will discuss next).

Triphala provides detoxification and digestive correction by promoting peristalsis and providing organ specific anti-inflammatory action in the lower GI tract. Today, Triphala is most commonly used for those with GI complaints such as bloating, sluggish digestion, food sensitivities, fatigue after meals, or chronic constipation.

The Triphala ‘cocktail’ challenges modern scientific investigative methods, since the unique compounds within each fruit seem to take on different attributes when combined, which may not be replicated when the fruits are analyzed separately. In fact, the therapeutic dose of each ingredient can be significantly reduced when formulated together in equal amounts.

Triphala is best used in capsules, standardized to 50% tannins, and at a dose of 500-600 mg before each meal (15-20 minutes prior is sufficient).  Taken consistently, results are generally seen in as little as two weeks. However, it may take as long as 4-6 weeks to obtain the full therapeutic effect.

TRIKATU: A complimentary formula to Triphala, Trikatu means “three peppers” or “three pungents.” It is a combination of Black Pepper (Piper nigrum), Indian Long Pepper (Piper longum) and Ginger (Zingiber officinale).  While Triphala lends a hand to the lower GI tract, Trikatu has its primary effects in the upper GI tract, where it enhances the “digestive fire” necessary for the breakdown of food and absorption of nutrients.

According to Ayurvedic theory, poor quality food and inconsistent eating habits can create a dullness to the upper GI, which, if uncorrected, will result in further deviations from overall health. Specifically, it can lead to unhealthy food cravings. This creates a feedback loop, since the poor food choices driven by the cravings reinforce the digestive dysfunction.

Today, we use Trikatu to enhance bioavailability of nutrients, drugs, and supplements, possibly through increasing the production of digestive enzymes and/or enhancement of first pass hepatic metabolism. Trikatu also seems to promote the assimilation of food through the intestines and normalizes gastric emptying, thereby reducing the tendency toward flatulence and distention while improving overall energy levels and nutritional status.

Trikatu is best taken in capsule form, and is standardized to gingerols and piperine.  Similar to Triphala, Trikatu is usually taken with meals. If used consistently, it gives results in as little as two weeks, though the most significant therapeutic results may take 4-6 weeks.

The ancient roots and modern branches of Ayurveda span the very corners of time itself, and it remains a driving force in the world of natural healthcare. It was one of the earliest systems of recorded medicine in the world, and it shows no sign of waning. In fact, it seems to be on the rise in the US and many other parts of the world.

Today’s practitioners, who are open to its complementary nature and its innate ability to see patients as whole people, will find this ancient system of medicine and its well-documented herbs to be profoundly effective.

Omar Cruz is the co-author of several textbooks including, A Botanical Protocol Manual for Health Care Practitioners and Traditional Medicines from the Earth [2nd Ed]. He currently serves as Director of Education for Himalaya Herbal Healthcare, the North American branch of the Himalaya Drug Company, located in Houston, Texas. Himalaya Herbal Healthcare is a leading producer of pharmaceutical-grade botanical formulations based on ancient Indian medical traditions.