Is Allulose the Next Sweet Thing?

With mounting evidence that sugar is the culprit behind skyrocketing rates of chronic disease, food manufacturers are understandably on the lookout for more healthful substitutes.

Enter allulose: a naturally occurring sugar found in small quantities in jackfruit, figs, and raisins, that was recently introduced into the world of food manufacturing.

According to the product’s website (www.allulose.org), allulose is a monosaccharide that is absorbed via the small intestine but not metabolized by the body, rendering it essentially calorie-free.

Also known as D-psicose, allulose has the taste and texture of regular table sugar and performs similarly in baked goods, but with 90% fewer calories, potentially marking it as the holy grail of sweeteners.

Though allulose is a recent addition to the alternative sweetener lineup, it has actually been around for a long time. Researchers figured out how to convert fructose to D-psicose in 1994. The compound is now manufactured by Japanese chemical company, Matsutani, by South Korean biotech giant, CJ CheilJedang, and by sugar manufacturer, Tate & Lyle (which also makes Splenda).

Allulose received ‘Generally Recognized As Safe’ (GRAS) status from the FDA in 2011.

In 2015, Anderson Global Group and Tate & Lyle both announced the launch of allulose in the US, under the brand names ‘AllSweet’ (AGG) and ‘Dolcia Prima’ (Tate & Lyle).

A Tate & Lyle representative shared that their allulose is made from corn-derived fructose, which isn’t non-GMO; a similar inquiry to AllSweet has yet to be answered.

The major health claim made by allulose manufacturersis is that the compound doesn’t trigger the usual blood sugar spike seen with sucrose (table sugar), nor does it affect the insulin response, thus making it suitable for diabetics and those with insulin resistance.

A study at the Matsutani research lab, involving 20 subjects, found that consumption of allulose actually suppressed the glycemic response to maltodextrin, a high glycemic sugar, when the two were consumed together (Iida et al. 2008. J Nutr Sci Vitaminol (Tokyo); 54:511-514).

This implies that allulose has the power to reduce the glycemic impact of other foods, which would certainly be a win for food manufacturers. A subsequent double-blind, placebo-controlled trial (n=26) found that people who consumed 5g of allulose with their meals had a significantly reduced glycemic response compared with those who ate the same meal, minus the allulose.

This effect was more pronounced in those with borderline diabetes than in the healthy subjects (Hayashi et al. 2010. Biosci Biotechnol Biochem; 74:510-519).

All of this seems very promising, for both food manufacturers, and for consumers – particularly the burgeoning number with diabetes and insulin resistance.

So, what about unwanted side effects?

The manufacturers state that allulose is “well-tolerated.” 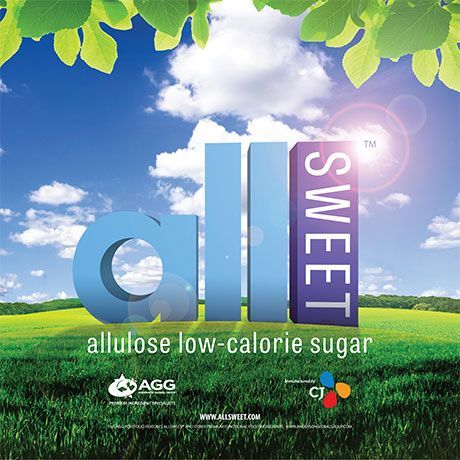 One of eight people consuming allulose in a 12-week safety study experienced adverse digestive symptoms, including diarrhea (Hayashi et al, 2010), an effect also seen with sugar alcohols. There is also some evidence from animal studies that large doses of allulose can damage the intestinal tract and cause diarrhea, but this only happens at intake levels that humans are unlikely to consume (Matsuo et al al. 2002; J Nutr Sci Vitaminol (Tokyo). 2002 Dec;48(6):512-6; Matsuo et al. 2003; Asia Pacific J Clin Nutr 2003;12 (2): 225-231.)

With artificial sweeteners recently being exposed for disrupting gut flora balance, we should be mindful of the effects of any new alternatives on our microbiome.

A small study from the Matsutani research lab (n=14) used a breath hydrogen gas test to assess the effects of allulose on intestinal bacteria, and concluded that it had low microbial fermentability (Iida et al. 2010. Metabolism. 2010 Feb;59(2):206-14. doi: 10.1016/j.metabol.2009.07.018), but little else is known at this time. This is clearly a key research question that has yet to be fully addressed.

So, if it is not metabolized by our bodies, or our microbes, what happens to allulose when we consume it?

The Japanese team found that around 70% is excreted in urine, unmetabolized. Tate & Lyle also tested excretion rates, using a radioactive tracer in eight male subjects, finding that 86% was excreted in urine, 3% in stool, and a negligible amount in expired air (Williamson et al. 2014. FASEB J; 28(1):LB450).

What do these findings mean for us? One ‘long-term’ safety study in humans (Hayashi et al. 2010) gave 18 healthy subjects either a placebo or five grams of allulose thrice daily for 12 weeks.

In the remaining subjects, the researchers did observe a significant difference in ALT levels between the allulose and control group after 8 weeks, although results were within normal levels.

Leptin is a hormone that suppresses the appetite and increases energy metabolism. From one viewpoint, that’s a really positive finding, especially if a similar effect also occurs in obese and/or diabetic people.

That said, chronically elevated leptin can lead to leptin resistance.

Dr. Steven Masley, MD, of the Masley Optimal Health Center in St Petersburg, FL, says that the taste of sweetness on the tongue triggers leptin release, regardless of whether the sweetener has caloric value. This response essentially ‘’tricks the brain’’ into thinking that it is receiving glucose.

Over time, with constant exposure, the brain blocks the leptin receptors to compensate, diminishing satiety and causing cravings, and potentially causing weight gain.

Dr. Masley acknowledges that he is not an expert on allulose. But based on his expertise in nutrition and the care of patients with metabolic syndrome, he says that he would expect allulose to have the same effect as other artificial sweeteners.

He also says that he wouldn’t recommend allulose to his patients without knowing more about its effects on leptin levels, the microbiome, and liver function. In his opinion, the safest alternative sweeteners are stevia and xylitol, followed by good old-fashioned cane sugar (in moderation).

Currently, allulose is only being marketed to food manufacturers rather than directly to consumers.

It does seem to have some benefits in terms of glycemic control, and the FDA considers it safe for people of all ages to consume, as a general-purpose sweetener in foods and beverages.

This means that allulose will likely be showing up in manufactured food products very soon, and marketers will likely be advertising its ability to lower the glycemic index of America’s favorite sweet treats.

Manufacturers are, no doubt, hoping that consumers as well as clinicians will overlook the fact that we do not yet have a lot of data on allulose, and most of the supportive evidence we do have comes from very small studies, almost exclusively funded and conducted by the manufacturers themselves.

Larger, independent trials need to be done, addressing possible safety concerns such as liver toxicity or microbial dysbiosis, before we start endorsing allulose as a consequence-free sweetener.