Obama’s Supreme Court “Victory” Could Cost Him in November

Chief Justice John G. Roberts’ decision to uphold the Obama administration’s healthcare reform may very well have handed the President a “victory” that could cost him dearly in November.

With a display of judicial jitterbugging that would make Fred Astaire jealous, Justice 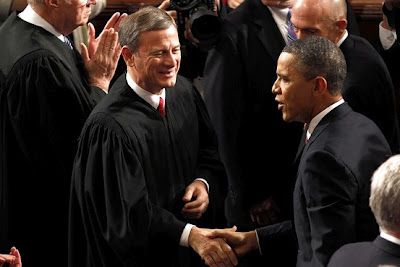 Roberts deftly accomplished three things: he made the Supreme Court look supportive of the President and his congressional allies without taking an unpopular stance on the insurance mandate; He cornered the administration into a position where it must accept that it has created a new “tax;” and he neutralized the argument that the Supreme Court is biased toward the Republicans.

Make that four things: By restricting the federal government from mandating that states participate in Medicaid expansion, he bolstered states’ rights and curtailed what many Americans see as excessive centralized power.

On face value, Roberts’ decision to side with “liberal” Justices Sotomayer, Ginsburg, Kagan and Breyer seemed a surprising gesture of non-partisan magnanimity. After all, Roberts came up through the Reagan ranks, was appointed by George W. Bush, and has generally aligned with conservatives on key decisions. The Affordable Care Act is the Democrats’ signature accomplishment, and the one that most rankles conservative voters.

But on closer look, Roberts’ move was a finely executed bit of politicking. By arguing that the Fed has no constitutional authority to require people to buy health insurance, but does have authority to tax those who do not, Justice Roberts upheld the conservative/libertarian position that a mandate is unconstitutional. At the same time, he signaled that the Obama reform is every bit the “tax & spend” plan that conservative voters fear it to be.

And he did all of that while looking like a really swell guy who rises above the political fray, cares only for the integrity of the constitution, and dares not rock the the Ship of State. Now THAT’s smooth! No wonder the man is smiling.

Whether intended as such or not, Roberts’ position is the one that does the least damage to Republican candidate Mitt Romney, but has the most potential to undermine President Obama’s bid for re-election. In a down-economy with so many people struggling just to get by, the accusation of “creating a new tax” could give Mr. Obama a supreme case of “electile dysfunction.”

Justice Roberts may be doing all he can to distance himself and the Court from partisan skull-bashing over healthcare, but he has clearly, if circumspectly, told America exactly what he thinks about health care reform: “It is not our job to protect the people from the consequences of their political choices.”

Right on cue, candidate Romney promised to repeal the ACA on “Day One” if he’s elected in November. “If we want to get rid of ObamaCare, we are going to have to replace President Obama,” Mr. Romney said.

That’s a little hard to believe, coming from a man who, as governor of Massachusetts, pushed through what is essentially a miniature version of the ACA on a state level, including a no holds barred individual mandate obliging citizens to purchase insurance.

One wonders how something that is deemed unconstitutional in principle at the national level is somehow acceptable on the state level. But that contradiction doesn’t seem to bother Mr. Romney or his supporters, and by now we should know better than to expect logic or philosophical consistency from elected officials, be they Republicans or Democrats.

It is interesting to note that the concept for the individual mandate actually emerged out of the conservative Heritage Foundation think tank in the early 1990’s. At the time, corporate leaders saw it as a more business-friendly alternative to the Clinton reform proposal. The idea was publicly endorsed as late as 2005 by no less a good conservative than Newt Gingrich, though he—like the Heritage Foundation–is now outspoken against it. Barack Obama, as a presidential candidate, is on record as opposing an insurance mandate.

As long as we’re on the topic of convoluted logic and inconsistencies, some of the analogies that emerged in and around the Supreme Court’s deliberations make one wonder how some of these people managed to pass the LSATs.

Case in point, Justice Antonin Scalia’s oft-cited “broccoli” objection. Using a silly analogy to argue a significant point, Justice Scalia contended that permitting the federal government to mandate the purchase of health insurance opened the door for mandates on lots of other individual purchases……like, for example, forcing people to buy broccoli.

According to medicolegal expert, Alan Dumoff, JD, “The correct analogy (between healthcare reform and vegetables) would be to say that the mandate is akin to the federal government ordering everybody to join food coops. It’s not about specific vegetables, which would be akin to specific treatments obtainable via the mandated healthcare plans. Justice Scalia is confusing his CABG with his broccoli.”

In this writer’s view, mandating that everyone join food coops would probably have far better impact on the nation’s health than mandating the purchase of insurance, but what do I know?

Then there’s the “car insurance” analogy, a weird rationale used by Obama, Gingrich, Romney and anybody else who has ever tried to sell the mandate. “You’re required to buy car insurance, right? And nobody has a problem with that, right? So what’s the problem?”

I wish health care insurance did function like car insurance. It would be fairly cheap, and only cover accidents and relatively unexpected malfunctions. You’d have to pay for all the basic maintenance, minor repairs and non-necessary luxury upgrades out of your own pocket. Premiums would be influenced by behavior (ie, the system would reward responsible action and penalize recklessness), and you’d have free choice of mechanics.

Oh, and you’d be wooed into buy it by a cute, smooth-talking lizard instead of overly-earnest mannikins trying to convince you how much they “care.”

Let’s face it, health insurance in this country is not really insurance. It is a system for the corporate underwriting and administration of healthcare transactions, and ultimately a system for concentrating wealth, very much like banks. The car insurance analogy, like so much else about the healthcare reform debates, is simply obfuscation.

It All Adds Up to Insurance

Math, being the merciless and exacting discipline that it is, there’s really only one way to accomplish the simultaneous goals of: A) reforming the delivery of health care at the national level; B) keeping the insurance industry in the center of the new system; C) establishing some degree of “universal” and irrevocable insurance coverage for all US citizens; and D) ensuring that insurers remain profitable enough to bother staying in the game.

That one way is, simply put, some form of coercion to get a maximal amount of Americans—especially the young, healthy and well-off ones—to purchase health insurance, while simultaneously raising federal revenue to provide insurance (government-based or private) for those who cannot afford it.

It’s a reality that both political parties must face. Romney threatens to unmake “Obamacare,” but he has not clearly stated with what he would replace it. That’s because he doesn’t really have a different option. His Massachusetts track record–to say nothing of his corporate pragmatism—suggests that he will simply replace “Obamacare” with a different version of the same thing. But thanks to Chief Justice Roberts, he’ll be able to blame the new taxes on his prececessor.

As a nation, we have come to a definitive conclusion that a true single-payer national health care system of the sort you find in Europe, Japan and other post-industrial countries, is politically untenable here. Single-payor was never an option, despite the fact that many polls—including an informal survey of Holistic Primary Care readers–show that many doctors and many ordinary people actually prefer it to the insurance fustercluck that currently controls American medicine.

Health care reform is all about insurance. President Obama said as much. In his statement following the Supreme Court decision, he reflected on his motivations to keep fighting for reform:

“There’s a framed letter that hangs in my office right now. It was sent to me during the health care debate by a woman named Natoma Canfield. For years and years, Natoma did everything right. She bought health insurance. She paid her premiums on time. But 18 years ago, Natoma was diagnosed with cancer. And even though she’d been cancer-free for more than a decade, her insurance company kept jacking up her rates, year after year.”

She did everything right. She bought insurance.

That just about sums it up, and it epitomizes precisely what is so disturbing about this nation’s approach to health care reform: It’s about buying, selling and regulating insurance.

Nowhere in the reform debates or the Supreme Court’s deliberations, did anybody seriously question whether an insurance-based system—particularly one dominated by for-profit players—is the best, most clinically effective, or cost-efficient way to provide good health care for the majority of Americans. Nowhere was there serious consideration of the ways in which insurance plans add unnecessary cost to the delivery of health care, and that this is a major reason why actual care is often so unaffordable to ordinary Americans.

The primacy—the necessity—of insurance is a given in the eyes of healthcare policy makers.

In her response to the Court’s decision, Karen Ignagni, chief executive officer of American Health Insurance Plans , noted that, “Individuals and families need secure, affordable coverage choices. Maintaining the link between market reforms and universal coverage is essential to avoiding significant cost increases and loss of choice for consumers and employers.”

Though she stressed that her organization’s constituents will cooperate with the government and “will continue to focus on promoting affordability and peace of mind for their beneficiaries,” she also threatened that, “major provisions, such as the premium tax, will have the unintended consequences of raising costs and disrupting coverage unless they are addressed.”

Where are health care professionals in all of this? The truth is, policymakers to the Left and the Right have given little attention to the needs and wishes of physicians, nurses, and the millions of other professionals on whom the actual practice of healthcare depends. The American Medical Association and other physicians’ groups are praising the Supreme Court’s decision. But on the ground, it seems like many doctors fear for their livelihoods.

A survey of over 600 physicians conducted by MDLinx, a physician information service provider on the day of the Court’s decision indicates that 66.5% said that they did not believe the law could achieve its objective of 100 percent healthcare coverage for Americans, and that 26.4% of solo and small-group practitioners said they could foresee closing their practices within the next year given the current financial environment.

On the positive side, the ACA does include language that is supportive of both preventive medicine and the inclusion of holistic practitioners, as John Weeks’ Integrator Blog (http://www.huffingtonpost.com/john-weeks/health-care-reform_b_1622993.html) rightfully points out. But beyond basic things like yearly check-ups, mammograms and immunizations (which hardly qualify as preventive or holistic), there’s little indication that the ACA will actually fund holistic practice.

To be sure, ACA will safeguard insurance coverage for people and families that are now at risk of losing their coverage, and it will decouple health insurance from employment, which would probably be a good thing given the current unemployment rate and job instability. It will also limit some of the insurers’ most egregious and ruthless tactics.

In the end, though, the long road to passage and implementation of the Affordable Care Act—including this latest Supreme Court oddysey—is really nothing other than political theater. The outcome is, and always has been, a foregone conclusion.