CDC: Demand for Holistic Medicine is Surging—Even Among the Poor 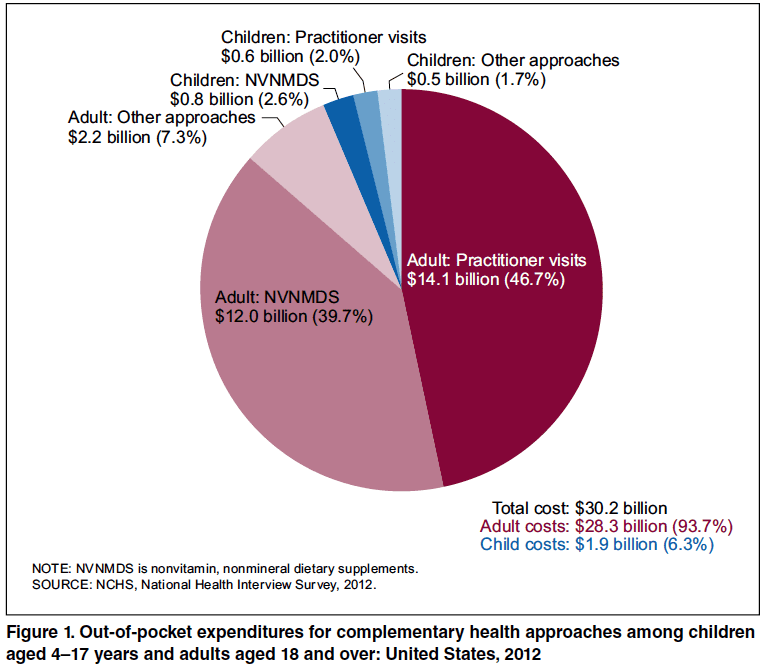 A  new Centers for Disease Control report based on interviews with almost 45,000 Americans indicates that public engagement with “complementary” practitioners and natural products is surging—and not just among affluent people.

Richard Nahin, PhD, MPH, and colleagues at the National Center for Health Statistics, estimate that Americans are spending upwards of $30 billion per year, out-of-pocket, on non-conventional medical services. The largest share of that –$14.7 billion—is for services from holistic practitioners. Spending on supplements and natural products is estimated at $12.8 billion annually.

Dr. Nahin and colleagues extrapolated those the stats from a massive, federally-funded 2012 interview project that involved 44,743 adults and children comprising what the investigators believe is a demographically accurate representation of the non-institutionalized US population as a whole.

Among other things, the survey quantified respondents’ use of a wide variety of non-pharma modalities including: Ayurveda, acupuncture, chelation, chiropractic, biofeedback, energy medicine, diet-based therapies, homeopathy, naturopathy, yoga, targeted dietary supplementation, and others.

Bearing in mind the limitations of any study based on self-reporting, and the challenges of extrapolating survey data into population-level conclusions, the CDC report does warrant serious attention.

Nahin’s group estimates that at least 59 million people over the age of 4 –one in every five Americans–are utilizing some form of care or treatment outside the medical mainstream. Adults spent an estimated $28.3 billion on complementary health approaches in 2012, with children representing $2 billion of the total out-of-pocket expenditure.

On average, people who seek non-conventional options spend about $433 per person per year with practitioners, and $368 per person on supplements.

Not surprisingly, spending on healthcare alternatives correlates with income level. But the difference between the wealthiest and poorest respondents wasn’t nearly as big as one might expect.

Families at the highest end of the income scale (> $100,000+) accounted for more than one third (36.6%) of all out-of-pocket dollars spent on complementary health approaches. But those at the lowest end, with family incomes under $25,000 still represented almost 12% of the total.

In terms of visits to complementary practitioners–who were defined according to types of modalities practiced, and not by professional degrees–the wealthiest respondents spent an average of $518 annually, versus $314 annually at the low end of the SES scale.

Notably, the poorest actually outspent the richest on dietary supplements. The mean supplement spend among those in the six-figure bracket was $377 per year; in the under $25,000 bracket it was $389 (Nahin R, et al. National Health Statistics Reports,No. 95, June 22, 2016).

The current report does not include any information on which specific complementary services or dietary supplement products are the most popular among consumers. Presumably, those data will be the subject of a future report.

Putting the findings in perspective, Nahin and colleagues note that complementary medicine in aggregate represents roughly 1.1% of the $2.8 trillion total US healthcare expenditure. The nearly $13 billion spent on dietary supplements is about 24% of the total out-of-pocket outlay for pharmaceuticals.

While holistic alternatives are still a very small slice of the total healthcare pie, the CDC authors point out that they “constitute a substantial part of out-of-pocket healthcare costs and are comparable to out-of-pocket costs for conventional physician services and prescription drug use.”

The rising public interest in non-conventional modalities is certainly showing up in the trenches of medicine.

At its annual international conference in May, the Institute for Functional Medicine presented data from its first large-scale member survey, and the numbers suggest that while many people are actively seeking out functional medicine practitioners, the economics of this type of practice still prove very challenging for the people doing the work.

IFM obtained responses from just over 1,000 practitioners, 50% of whom were MDs.

IFM: One Million and Counting

On the good news side, Tom Blue, IFM’s Director of Strategic Development, reported that the number of people using the “find-a-practitioner” search on the IFM website already hit over 1 million in 2016, up from about 740,000 through all of last year.

That’s far better than the 10-15 minute averages in conventional care—one of a number of reasons why so many people are seeking care outside the mainstream systems.

Functional medicine practitioners are also heavily nutrition-oriented, with 99% recommending supplements and 67% dispensing in the office.

Those numbers track very closely with what we’ve seen in our Holistic Primary Care practitioner surveys. Our 2016 data set shows that 93% of HPC readers recommend supplements, 64% are dispensing, and 84% of dispensers stock products in the office.

The problem, says Blue, is that many functional medicine clinicians—especially the MDs–are failing to economically capture the value that they create for their patients.

Compared with peers in conventional medicine, functional medicine MDs take home considerably less. In some cases the shortfall can be as great as 30%.

Blue attributes the income gap to several factors. For one, functional medicine is time-consuming, and unless the practice model is designed carefully to compensate for the extra time spent with patients, this can be a big fiscal drain.

And then there’s the fact that functional medicine is typically not covered by insurance.

On top of that many practitioners lack the administrative skills they need to effectively manage and market their practices.

One of the most interesting findings from IFM’s survey is the fact that for non-MDs, advanced training in functional medicine actually results in an income surge. IFM training leads to a 33% income boost for non-physicians.

It remains to be seen how holistic and functional medicine practitioners can translate the strong public demand for their care into strong financial support for their practices. Clearly, the current conventional care models are not working well to that end.

For insight and direction on real-world practice models that do support holistic care, check out the vast archive of recordings from HPC’s Heal Thy Practice conferences. www.holisticeducationexchange.net.