Yet it’s advice millions of Americans aren’t able to follow, even if they want to.

They’re hampered by cost and distance–the biggest barriers to healthful eating according to a National Institutes of Health study. Others lack the time or the culinary know-how to fix consistently healthy plant-based meals for themselves and their families.

Physicians now have the power to change that through an innovative program called Wholesome Rx. Established by the nonprofit Wholesome Wave, the Wholesome Rx system allows doctors to literally prescribe produce to patients and their families in low-income, underserved communities.

A physician working with Wholesome Rx can issue patients coupons redeemable for a dollar’s worth of produce per day per person — that’s $4 per day or $28 per week, for a family of four.

That small amount can be “a game changer,” says Gabrielle Langholtz, Wholesome Wave’s marketing manager. “We all know what a healthy diet requires. When people can afford produce, they buy produce. When they can’t afford it, they don’t buy it.”

The program aims to rectify one of the strangest and pernicious paradoxes of the American economy: healthful, fresh, minimally processed foods have become very expensive, while disease-inducing, highly-processed, sugar- and toxin-laden junk foods are very cheap.

For someone who’s living primarily on cheap take-out or the packaged food available in convenience stores, that $7 per person per week can facilitate a significant increase in the amount of fresh, nutritious food they’re eating.

Wholesome Wave began in 2007 as a program to help low-income families increase their intake of produce by doubling the value of SNAP (aka food stamp) dollars that recipients spend on fruit and vegetables, now has over 10 years of evidence to support that claim.

The Wholesome Rx program, launched in 2010, is a logical extension of the organization’s mission—one that recognizes the vital role physicians and other medical practitioners can play in moving low-income people toward better health.

Wholesome Wave now operates in 49 out of the 50 states, North Dakota being the only exception. “North Dakota physicians, here’s an opportunity for you!” says Langholtz. “Join the other states and start North Dakota’s participation in Wholesome Rx.”

A physician working with Wholesome Rx can issue patients coupons redeemable for a dollar’s worth of produce per day per person — that’s $4 per day or $28 per week, for a family of four. That small amount can be a game changer.

The FVRx program has enrolled clinics in a diverse range of settings, from inner cities to Navajo reservations. Participating clinics serve people of all ages, races, and backgrounds. The 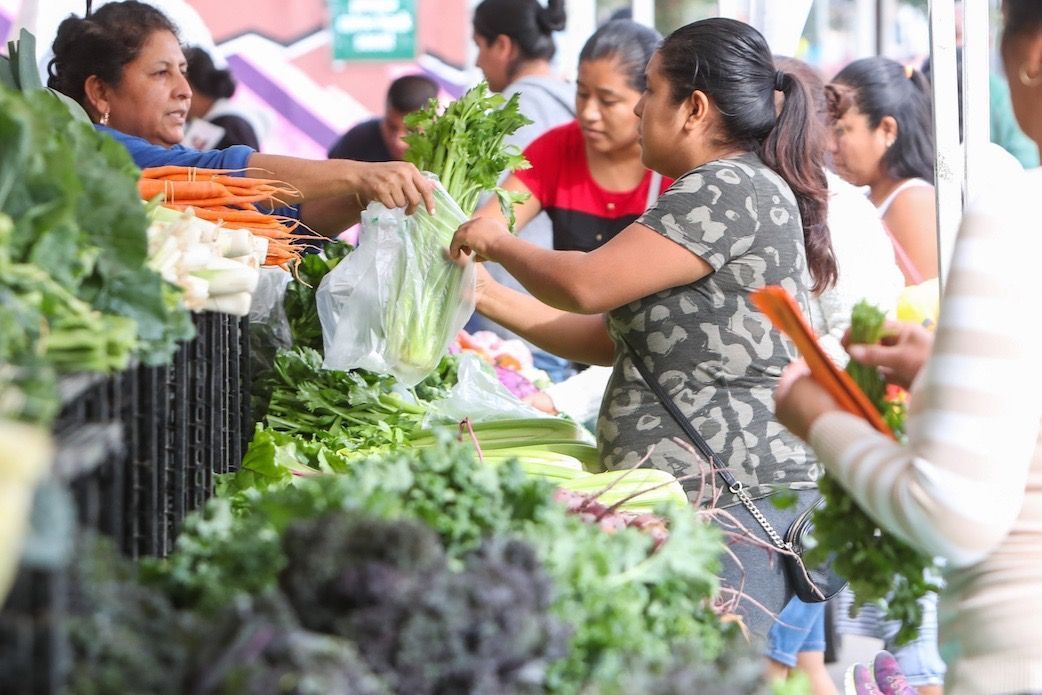 produce prescriptions are redeemable at participating grocery stores and, most importantly, local farmer’s markets. So the program not only supports patients’ health, it also provides revenue for small family farmers, many of whom struggle to stay on their land.

Joining the Wholesome Rx team of participating doctors and hospitals isn’t quite as easy as writing a script, but it’s close. Wholesome Wave guides physicians and clinics through the process, establishing the program (most last four to six months), getting local farmers markets and supermarkets to participate, setting up patient enrollment and securing funding through partnerships.

Compare that, he says, “to the cheap, processed calories that many people are forced to subsist on because of low wages. This vicious cycle leads to diet related diseases such as obesity and diabetes and general fatigue, making it even harder to escape poverty.” Friedrich typifies the unique and supportive community of physicians, their patients, and the produce providers that Wholesome Rx strives to create.

Farmers markets are “a big part of what we are,” says Langholtz, but with Wholesome Rx now operating in 49 states, more grocery stores are able to participate, too.

That means people working multiple jobs who only have time to shop for food after hours have greater access to affordable produce and can buy the household goods they need at the same time — one stop shopping. Supermarkets can also offer a greater variety of fruits and vegetables, so patients can choose familiar favorites.

Doubling SNAP is still Wholesome Wave’s largest program, but Wholesome Rx, which makes the connection between wellness and food choices, is a particular passion for co-founder and CEO Michel Nischan.

Nischan isn’t a physician. He’s a four-time James Beard award-winning chef. Growing up, Nischan only knew fresh, local food. His grandfather and parents were farmers, his mother found brilliant ways to serve up homemade comfort food to her four children.

He is also the father of two diabetic sons. Chris was only five when he was diagnosed with Type 1 diabetes. The discovery that weight and diet are keys to controlling, even reversing diabetes mobilized Nischan, not just as a father, but as a food activist. It confirmed his belief that the further we get from affordable access to healthy food, the greater the health consequences.

The CDC predicts that diabetes will affect one of out three people by 2050, a statistic so shocking Nischan was determined to bridge the gap not just for his own family but for families across America. The James Beard Foundation named him 2015 Humanitarian of the Year.

So who’s part of Wholesome Rx? “Americans who rely on SNAP and those who make a hair too much and cycle out of the program,” says Langholtz. “It’s urban, rural, black, white, brown, elderly people, young families, Appalachia, downtown LA, Maine.”

Wholesome Wave sees success of the program through redemption rates. Most Americans don’t bother with coupons. With Wholesome Rx “almost every single coupon we hand out gets redeemed.”

Physicians see proof of success by way of their patients. More than half of patients have reduced BMI after completing the program, and two-thirds make produce part of their daily diet. No wonder Langholtz says, “Doctors love this program.”

Interested in establishing a Wholesome Rx program in your clinic? Wholesome Wave makes it easy. Visit www.wholesomewave.org to learn how.