For women suffering from insulin resistance, a novel food classification tool may offer relief from painful and worrisome symptoms.

The new system, called the Dietary or Food Insulin Index (DII or FII), ranks individual food items according to the insulin responses they induce. The greater the insulin demand a food exerts, the more it increases insulin levels in the blood and, subsequently, the higher its insulin index value.

The index compares the insulin responses to 1000 kJ portions of specific foods against that generated by consumption of a 1000 kJ standardized glucose reference.

Insulin regulates blood sugar levels by stimulating glucose absorption and metabolization. As defined by the National Institutes of Health, insulin resistance is a condition in which the body produces insulin, but doesn’t use it effectively. In insulin-resistant individuals, the body’s muscle, fat, and liver cells fail to respond properly to the hormone, causing an excess of glucose to build up in the bloodstream. Over time, this can lead to diseases like prediabetes, type 2 diabetes, and a range of other serious health disorders.

Signs of the condition may include abdominal weight gain and resistance to weight loss, which can occur as high insulin levels block the breakdown of fat in the body.

While the root causes of insulin resistance are not yet fully understood, researchers point to diet as a major contributor. High-fat and highly processed, carbohydrate-rich food items — in other words, the basis of the standard Western diet — trigger substantially greater insulin secretions than do traditional diets comprised of less refined foods (Prescott, J. et al. Cancer Epidemiol Biomarkers Prev. 2014; 23(8): 1512–1520).

Although it’s often discussed in relationship to diabetes, insulin can uniquely influence women’s health in a variety of ways. A powerful hormone itself, insulin is intricately connected to the other hormones in the body, including sex hormones like estrogen and testosterone.

One of the hallmark traits of PCOS — a common hormone disorder affecting girls and women during their reproductive years — is higher-than-normal testosterone levels. This hormonal imbalance can manifest in an assortment of health challenges ranging from irregular menstrual periods and infertility to excessive facial and body hair growth, skin issues such as acne, dark patches, and skin tags, and the development of large numbers of cyst-like follicles on the ovaries.

PCOS is commonly treated using symptom-relieving and hormone-balancing medications. But these approaches do not necessarily modulate  the elevated insulin levels which often co-occur with PCOS. And since there’s no true medical “cure” for PCOS, lifestyle changes like diet modification are a critical component of sustainable PCOS treatment.

How the Insulin Index Works

Using the Insulin Index to guide food choices is one strategy that may help PCOS patients and others with insulin resistance. 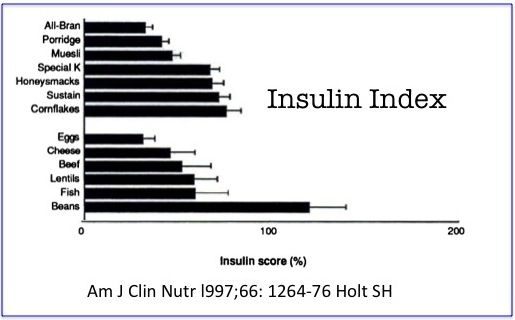 The DII/FII is actually a new iteration of an older tool. The first study to report on the Insulin Index appeared in 1997 in the American Journal of Clinical Nutrition (Holt, S. et al. Am J Clin Nutr. 1997; 66(5): 1264–1276). Since then, only a handful of additional studies expanding upon the concept of insulin scoring have appeared in the literature.

What’s the difference between the Insulin Index and the Glycemic Index?

Several studies have compared the two. Though similar, there are significant differences. The Glycemic Index (GI) indicates how much a particular carbohydrate-containing food raises one’s blood sugar levels. The insulin index, on the other hand, classifies foods based on their effects on insulin levels. The two are not always perfectly correlated.

For example, the Glycemic Index system doesn’t account for foods with little or no carbohydrate content. “It cannot provide a guide to the relative insulin response of a large majority of foods…including high-protein foods such as meat, fish, poultry, eggs, and cheese and high-fat foods such as butter and olive oil,” write Bao et al.

While carbohydrates — which are known for their ability to spike blood sugar levels — are also the main drivers of insulin secretion, they’re not the only macronutrients that do so. “Protein-rich foods also elicit a significant insulin response and, when combined with carbohydrates, act synergistically to raise insulin concentrations and reduce glycemia” (Bao, J. et al. Am J Clin Nutr. 2009; 90(4): 986–992).

High GI scores correlate with high insulin index scores most — but not all — of the time. Alhough the majority of high-GI foods also rank high on the II, there are several low glycemic foods that can prompt surprisingly high insulin surges. Dairy products, beef, and fish are among a number of food categories noteworthy for their disproportionately higher insulin index values.

While the research is promising, it’s still very limited. Considering the complex interplay of diet, lifestyle, and genetic factors on insulin secretion, the management of insulin resistance is almost by necessity going to require multiple, overlapping strategies. Still, the Insulin Index provides clinicians and patients with an easy-to-use tool that can help a diverse range of patients get a better handle on the all-too-common problem of insulin resistance.