The Roots of Supplement Quality Are in the Soil 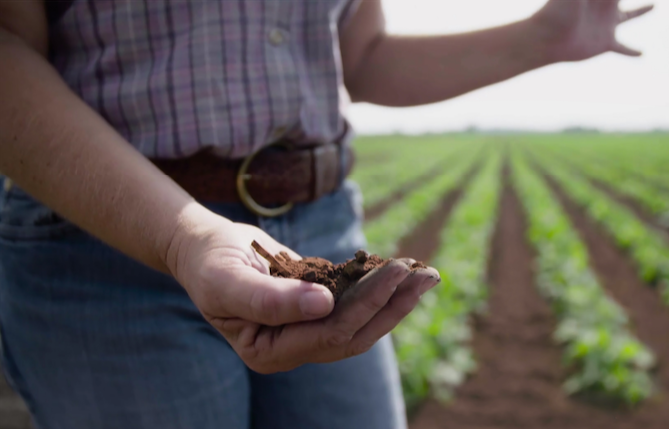 The caliber of a dietary supplement is only as high as the caliber of the ingredients it contains. For supplements containing plant-derived ingredients, product quality has its roots in the soil in which the plants are grown.

Recent developments in soil science and sustainable agriculture are helping conscientious companies to safeguard product quality in an era of widespread environmental degradation.

Its a simple fact: to cultivate healthy plants, you need healthy soil.

“Happy soil leads to nutritionally dense plants. It is impossible to separate soil health from nutritional health,” explains Christine Mason, farm operations manager at Standard Process, a pioneering nutritional supplement company that grows most of its own ingredients.

Lee’s founding principles continue to guide the company today. “Our food cannot be healthier than the soil it is grown in,” Mason stated. “Although we have beautiful crops and much to be proud of…our crowning achievement is the soil itself.”

As with the human intestinal microbiome, diversity is a vital factor in the health of the soil microbiome. Microbes in the dirt “carry out important processes, including support of plant growth and cycling of carbon and other nutrients,” note researchers Janet Jansson and Kirsten Hofmockel. But because scientists are just beginning to understand what lives beneath the dirt, most soil microbes have not yet been isolated and their functions remain largely unknown.

According to researchers at Ohio State University’s College of Food, Agricultural, and Environmental Sciences, there are more microbes in a single teaspoon of soil than there are people on Earth. By mass, bacteria and fungi comprise over 90% of the soil microbial community.

“The soil microbiome is the new frontier of research,”

Plants, including many that are important sources of food, have evolved over millennia to interact symbiotically with the microorganisms present in the soil. Understanding how those billions of microbes interact with different root systems and affect plant biochemistry, equips farmers with new tools to improve soil quality.

But widespread industrial agriculture has had a massive negative impact on soil quality, and is reshaping the natural balance of plant-microbe interactions.

The heavy application of synthetic nitrogen fertilizers, commonly seen on large industrial farms, is an effective way to increase crop yields. But in so doing, it wreaks havoc on the environment. Nitrogen-rich fertilizer overuse is now recognized as a major pollutant. Soil microbes convert nitrogen fertilizers into nitrous oxide, a greenhouse gas that traps 300 times as much heat as carbon dioxide.

In order to maximize soil life, Mason says, diversity is key. And this is true at all levels.

Many small-scale sustainable, organic farms use techniques that inherently promote biodiversity, like crop rotation. But large-scale monocropping––a hallmark of modern industrial agriculture––does exactly the opposite.

“To me, the healthiest soils on the planet are found in undisturbed prairie or forest floor,” Mason said. “These are about as far away from monoculture row crops as you can get.”

Last year, at the grand opening of Standard Process’ Nutrition Innovation Center (NIC) in Kannapolis, NC, Mason explained that up to 80% of 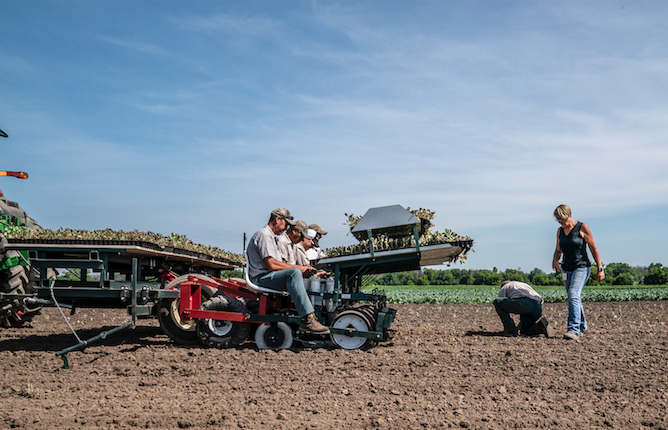 the time, soil microbes live under starvation conditions. Well-fed microbes, on the other hand “are, to paraphrase biologist Jim Fuhrer, ‘soluble bags of fertilizer.’”

The 600-plus acre Standard Process farm, located in Wisconsin’s Kettle Moraine basin, has been growing organic produce since the company’s founding in 1929. Mason’s team plants between 20 and 35 different crops every year, including cover crops grown for the sole purpose of nourishing the soil. They harvest over 6.5 million pounds of produce annually.

Alongside its food/ingredient crops, the farm grows cover crops exculsively “to feed the next crop, and the microbiome of the soil that’s going to encourage a healthy next crop,” said Mason who, along with her husband, Steve, comes from a long line of farmers in the region. But she’s had experience working in a wide variety of agricultural and industrial settings, from small family farms to major agribusinesses.

By carefully choosing not only which food crops they grow, but also the cover crops they plant, Standard Process farmers can “provide a steady food source to soil microorganisms, promoting proliferation of benign organisms and crowding out and suppressing soil-borne diseases,” Mason said at the NIC launch.

Again, the parallels between human and soil health are striking. “If we only eat one thing over and over, [we] are going to be nutritionally void. Same with the soil,” Mason proposed. Typically, industrial farms only grow one or two crops––corn and soybeans, for instance. Their idea of crop rotation is to grow soy for a few years, then corn, then soy again.

The problem is that the various microbes residing in the soil each have a preferred diet. “If they don’t have different food sources, it’s harder to have an active soil life,” Mason said.

She and her colleagues employ several other techniques to boost soil health. National Organic Program guidelines restrict the use of animal manure on crops grown for human consumption, so Standard Process uses green manure––made from crops grown specifically to nourish the soil––instead.

Oats, chickling vetch, and kidney beans are among the farm’s top selections for natural nitrogen sources that help fertilize crops while eliminating the need for  chemicals or animal feces. A 5-year crop rotation schedule assists with keeping insects and other pest populations in check, without relying on industrial insecticides or herbicides like glyphosate.

Growing crops organically doesn’t just produce healthier soil and healthier plants––it’s better for the earth, too. According to the Carbon Cycle Institute (CCI), agricultural operations are the second largest contributor to carbon dioxide emissions on the planet.

According to a March 2018 National Geographic report, “more than 75 percent of Earth’s land areas are substantially degraded, undermining the well-being of 3.2 billion people.” Agriculture and livestock overgrazing are two of the greatest contributors to soil degradation.

At the same time, carbon can also be beneficially stored in soils over long periods––decades to centuries or more––in a process known as soil carbon sequestration. This makes agriculture the one and only sector uniquely positioned to “transform from a net emitter of CO2 to a net sequesterer of CO2.”

“There is no other human managed realm with this potential,” CCI argues.

“Organic matter is approximately 58% carbon, and soils with high organic matter are the soils most apt to be able to keep up with the food demands of our planet’s population explosion,” Mason proposed. “Scientists are now beginning to understand that we are going to have to teach farmers and ranchers how to maximize the carbon in soil, not just for the bounty and health of the plants grown on top of it, but also for the health of the planet itself.”

Growing a diversity of crops, keeping tillage to a minimum, and using organic compost are all methods for maximizing soil carbon content. While embraced by sustainable farmers, these practices aren’t typically employed on conventional farms.

One of the consequences of undernourished soil is low nutrient content. As Mason put it, “personal vitality is dependent on soil vitality. The nutrition in harvested portions of a plant is derived from the nutritional density of the soil.”

Today, most Americans are simply not getting enough nutrients from fruits and vegetables. “8 out of 10 Americans have a phytonutrient gap,” said John Troup, PhD, VP of clinical science, education and innovation at Standard Process.

Only 3 in 10 people eat adequate quantities of green fruits and vegetables, and even fewer––2 in 10––consume enough orange/yellow and red produce, Troup said. Those stats, he suggested, represent an urgent need to improve our overall nutritional quality index.

Even those who do eat their fruits and veggies might not be obtaining their full nutritional potential. “If you look at the 20-40% of people who eat fairly healthy and get the right amount of produce servings, only about 20% are able to get the recommended nutrient density from the fruits and vegetables they eat,” Troup warned. “There [are] gaps in our nutrient profiles.”

Fortunately, there’s some good news: upping our intake of fruits and veggies results in a 5% reduction in mortality risk for each daily serving increase, Troup said, adding that it is increasingly important to document the specific effects of nutrition interventions on clinical outcomes to demonstrate the myriad ways nutrition influences health.

“One of the powerful advantages that Standard Process has is that we’re vertically integrated from basically farm to fork, or seed to supplement,” Troup said. His company’s “organic, natural, healthy, good-for-you” ingredients contain “all the nutritional power that food was meant to have.” 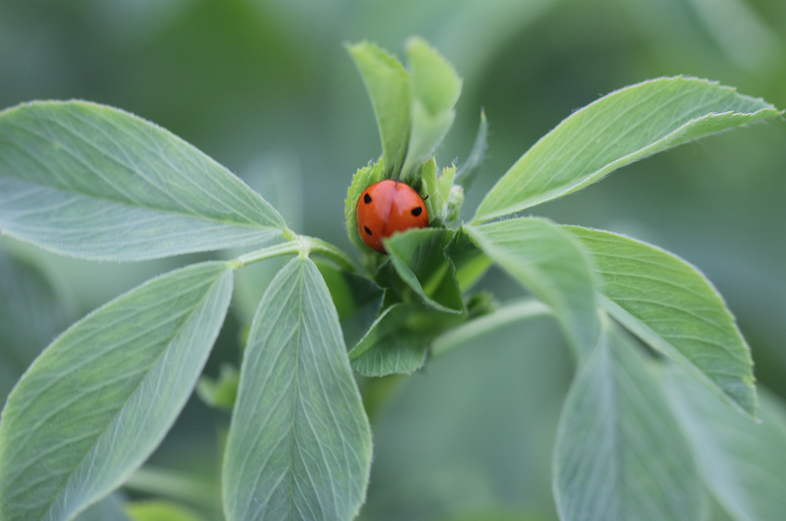 Packaging that raw power into small supplement bottles requires a huge level of commitment. “I don’t want people to think organic is easy,” Mason stressed. “This is really hard. It’s constant diligence, it’s never over. It’s a testament to organic farmers that as hard as it is, they choose this way anyway.”

Converting land that was previously farmed conventionally into an organic farm is a massive undertaking. Before a farmer’s harvest can receive formal organic certification, the farm must first be managed entirely organically for three full years. During that transitional phase, organic certification standards strictly prohibit the use of any genetically modified or synthetic inputs on the property. Certifiers conduct annual inspections to ensure compliance with organic farming requirements.

In the past two decades, Standard Process increased production at its farm by an impressive 500% on the same acreage. “We beat the conventional average in our state every year on every crop,” Mason reported.

“What makes us unique is you’re not buying a commodity product, you’re buying something that we managed from literally the day we bought the seed, through the soil tests, to the harvest,” she said. She hopes Standard Process’ performance will inspire an industry wide shift in understanding that, “you can be sustainable, build soil, and feed the planet,” all at once.