The Poria fungus–little known in the West but long-used in traditional Asian medicine–has recently attracted the attention of health researchers and practitioners. Compounds in this unique mushroom have particularly positive effects on the kidney.

Poria cocos (poria) has been used medicinally for over 2,000 years in China and Japan, where it is known as Fu ling or Matsuhodo. To this day, it remains one of the most common ingredients in traditional Chinese medical formulas and patent medicines, often prescribed as a diuretic, sedative, or tonic.

Though it is widely referred to as a “mushroom,” the medicinally useful portion of this fungus is not technically a mushroom but a sclerotium–a dense mass of hardened fungal mycelium. Poria is a wood-decaying fungus that grows on a variety of pine tree species. The sclerotia look very much like stones. Other fungal sclerotia that have found their way into medical use include Cordyceps sinensis (the so-called “caterpillar fungus”), and Chaga (Inonotus obliquus). 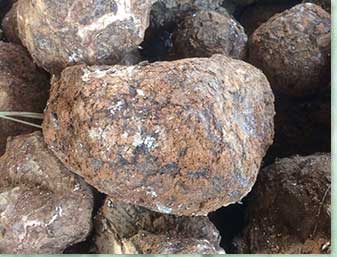 Traditionally, Poria is utilized primarily to drain “dampness” from the body. Dampness is viewed as a major culprit behind a variety of health imbalances including conditions that Western medicine categorizes as allergies, high cholesterol, chronic fatigue, cancer, fibromyalgia, and metabolic disorders.

A small but growing body of recent biomedical research illuminates poria’s impressive array of healing benefits, ranging from its immunomodulatory and anti-inflammatory activities to antioxidant, anticancer, antitumor, and antihyperglycemic properties.

Last fall, the Japanese supplement company, Mushroom Wisdom, launched a new product, Super Poria, designed to promote kidney and immune wellness, and to introduce Poria to a broader US market.

Mushroom Wisdom educator and consultant Mark J. Kaylor, PhD, CN, notes that “a good way to visualize dampness in the body is as a thick fog or very high humidity.” He explains that in the kidneys, dampness manifests in the form of water retention. Symptoms of dampness elsewhere in the body include bloating in the stomach, diarrhea in the bowels, brain fog, mucus in the lungs, vaginal discharge, and cloudy urine. Externally, excessive dampness  is expressed as edema and swelling.

Poria appears to support kidney health in a number of ways. First, it possesses antioxidant properties. A free radical scavenger, poria was shown in one study to reduce intracellular oxidative damage. The study’s authors argue that the mushroom’s antioxidant activity could play a role in enhancing cell viability, implicating it as a natural agent in the treatment of many diseases marked by oxidative stress (Park, Y. et al. Pharmazie. 2009. 64(11): 760-764).

Poria’s ability to quell oxidative stress holds promise for patients suffering from chronic kidney disease (CKD) characterized by kidney damage and a gradual decline in renal function. CKD is more prevalent today than it was just a few decades ago, affecting an estimated 26 million Americans over the age of 20. CKD risk is elevated among people with diabetes, obesity, and hypertension, other chronic conditions all of which are also on the rise in the US (Hill, N. et al. PLoS One. 2016; 11(7): e0158765).

Another common kidney disorder whose underlying causes are not fully understood, kidney stones can develop into CKD if left untreated. Nephrolithiasis is highly recurrent, painful, and difficult-to-treat.

In traditional Chinese medicine, poria is often used for kidney stones. The results of one in vitro study showed that a classical Chinese formula called Wu-Ling-San, which includes significant amounts of Poria, effectively inhibited the formation and aggregation of calcium oxalate (CaOx). CaOx aggregations are the most common type of kidney stones. The study’s authors argue that the traditional formulation has the potential to prevent CaOx stone recurrence (Chen, Y. et al. Am J Chin Med. 2007; 35(3): 533-541).

Others have indicated that poria improves nephrotic syndrome, a constellation of symptoms including high urine protein levels, low blood protein levels, high cholesterol and triglyceride levels, and swelling. The mushroom appears to influence body fluid regulation via the inhibition of water and sodium channels, specifically by suppressing the expression of both AQP2, a protein coding gene that plays a role in urinary water reabsorption, and the epithelial sodium channel, which facilitates sodium reabsorption (Lee, S. et al. Ev-Based Comp Alt Med. 2014; doi:10.1155/2014/570420).

Pachyman also acts as an antinephritic. More than 20 years ago, Japanese researchers demonstrated the effectiveness of pachyman isolated from poria against original-type anti-glomerular basement membrane (anti-GBM) glomerulonephritis, a form of autoimmune disease that causes acute inflammation of the kidneys, at least in rats. They concluded that pachyman quells renal disease by inhibiting the deposition of C3, a protein that can disrupt renal function when it builds up in the kidneys (Hattori, T. et al. Jpn J Pharmacol. 1992; 59(1): 89–96).

He suggests utilizing poria while investigating and addressing the multiple root causes of a patient’s symptoms allows practitioners to provide safe, effective relief. It may also have a role in averting the development of more serious kidney disorders.

Chronic kidney disorders can be difficult and costly to treat, enhancing the appeal of natural, alternative therapeutic options. Few definitive medical treatments are available for CKD. The typical approach relies on healthy lifestyle prescriptions like refraining from smoking and tobacco use, limiting alcohol consumption, controlling blood pressure and blood sugar levels, and avoiding drugs like acetaminophen and ibuprofen.

Kidney stones are also a common challenge for which medical options are limited. Surgical and mechanical interventions to remove stones have improved greatly over the decades, but lithotripsy, surgery, ureteroscopy, laser vaporization, and percutaneous nephrolithotomy are still invasive and costly.

Mushroom Wisdom’s corporate leadership recognize that trusting in Poria’s effectiveness in resolving “dampness” requires American practitioners to make a significant shift from the typical Western biomedical mode of thinking about kidney disease. But the research so far does suggest that there’s at least some rationale for thinking that this mycological medicine might work.

They realized that while Poria is readily found as an ingredient in a number of Chinese patent formulas, it is much harder to find as a stand-alone ingredient. Kaylor indicates several characteristics to look for in a quality poria remedy.

The highest quality Poria, he says, is grown in a manner that mirrors its growth in the wild; ideally, it should be grown underground on pine logs. He also advises practitioners to look for formulations that utilize the Poria sclerotium, as this is the portion of the fungus that is used in traditional medicine, and the one that’s been best-studied in modern trials.

As with the vast majority of medicinal mushrooms, Poria is most effective when the medicinal compounds are properly extracted. It is difficult for the human body to digest chitin, the fibrous component of mushrooms, which is why extraction is necessary. Kaylor suggests that Poria should be dual-extracted — once in hot water and a second time in alcohol — for maximum efficacy.

When it’s properly grown and well sourced, this powerful mushroom offers a healing antidote to a very common health-draining constitutional pattern. “The fast-paced, multi-tasking, eating on the go, stressed, mucus-causing and heavily processed food-consuming patient of today is calling out for the Poria mushroom,” Kaylor says.