Racial disparities in access to healthcare services, and the impact they have on community, are well-known phenomena that have been written about and openly decried in healthcare policy circles for decades.

There’s been far less attention given to the fact that across all specialties, White doctors get paid more than Black doctors. Much more. 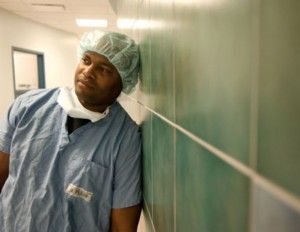 income between Black and White physicians that have persisted for many years.

The analysis was based on two large data sets: the American Community Survey (conducted by the US Census Bureau) that included 58,377 White physicians and 2,950 Blacks; and the smaller Community Tracking Study, by the Center for Studying Health System Change, which included 4,723 Whites and 860 Blacks.

While it is generally true that Blacks in medicine have historically tended to end up in lower-paid primary care specialties, as have female physicians, Jena points out that, “These income differences remained after adjustment for physician specialty, hours worked, practice characteristics, insurance mix, and geography.”

Hour for hour, specialty for specialty, setting for setting, Blacks in healthcare are being paid less than Whites.

Jena and colleagues note that the racial disparities, though quite large, are actually smaller than the gender-based disparities. Women in medicine earn roughly 40% less than their male counterparts across all specialties—a fact that has not changed much over the last decade despite the major strides women have made in the healthcare field.

Medicine’s gender-based pay inequities came to light decades ago, and though it has not changed much despite the strides made by women in healthcare during that time, it has at least been the subject of discussion.

The race-based inequities have been given the blind-eye treatment in healthcare policy circles, and Dr. Jena’s group notes that prior data on this subject have been scant.

The reasons for the income gap between Black and White doctors are not entirely clear, but Jena and colleagues stress that they cannot be attributed to the obvious explanations—specialty choice, hours worked, practice settings, patient population characteristics. The dollar differences persisted across all of these variables.

As medicine has become more of an employment-based profession rather than an entrepreneurial one, negotiation skills as well as know-how in dealing with large bureaucracies have become as important as actual clinical skills in determining professional success.

It may be that Blacks and women in medicine feel less confident in negotiating with their employers, or that they face myriad overt and covert messages telling them to be happy with what they’re given, to keep quiet, and to not make waves.

But medical training is no less expensive for Blacks or women than for White males, and the demands of a medical life are no less stressful.

Leave it to the British Medical Journal to tell us what’s going on in our own healthcare system!