A sparkling water beverage containing a combination of five amino acids plus small amounts of chromium picolinate can reduce postprandial glucose peaks by nearly 30%, making it a potentially valuable new tool for people concerned about their diabetes risk. 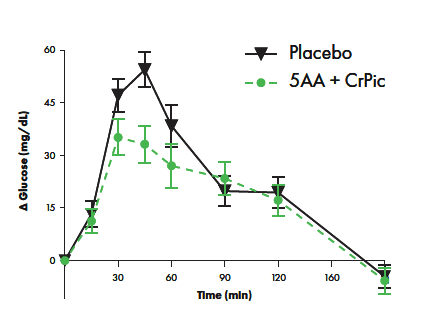 Both the 5AA+CrPic and the 5AA drinks reduced postprandial glucose spikes by 25% to 30% compared with water. The effect was apparent within 15 minutes, and persisted for as long as 3 hours. CrPic alone slightly altered the incremental area under the curve (iAUC) for glucose, but the difference was not significant (Ostman E. et al. Functional Foods in Health and Disease. 2017; 7(2): 88-97).

Compared with water alone, both the amino acid-containing drinks provoked insulin surges within 15 minutes of the high-glycemic meal. However, with the 5AA-CrPic, this insulin excursion was roughly 50% lower than with the 5AA alone, suggesting that the added chromium improves insulin economy.

These beverages are not intended as “treatment” for hyperglycemia, and they cannot compensate for high-glycemic eating patterns. But they can help mitigate the highly detrimental glucose excursions that often follow carb-rich meals.

“The 5AA-CrPic drink, when co-ingested with a high glycemic breakfast meal beneficially affected the glycemic response in healthy but “at risk” subjects, and thereby may circumvent pro-oxidative and/or pro-inflammatory conditions associated with oscillatory glycemic episodes,” the authors note.

Roughly 20 years later, Swedish researchers began to publish on the effects of various types of protein—cod, milk, soy, gluten, whey, casein—on glucose and insulin. In a landmark 2006 paper, University of Uppsala researchers showed that cod, milk and soy-derived proteins differed widely in their insulin-stimulating effects (von Post-Skagegard M, et al. Eur J Clin Nutr. 2006: 60 (8): 949-954). It was not just the presence of protein, but the specific type that mattered.

Exhaustive analysis led to the conclusion that the glucoregulatory effect of milk, whey, and other dairy products is due largely to five key amino acids found in whey: L-Leucine, L-Threonine, L-Lysine, L-Isoleucine, and L-Valine. 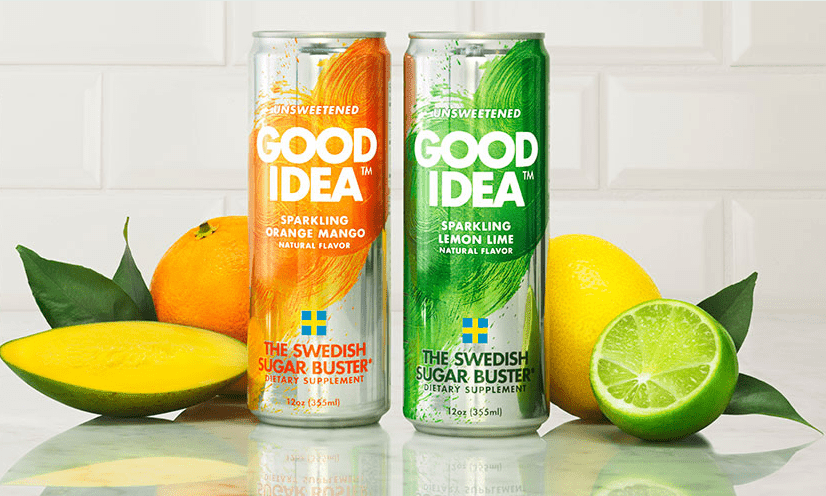 public/private institute—to consider ways to translate the science into a useful nutritional product for mainstream consumption.

Dr. Elin Ostman, lead author of the new study, and her colleagues at the Lund center have parlayed their research into a functional beverage called Good Idea. This new sparkling water line was recently introduced into the US, and is marketed as a dietary supplement to, “help those with normal blood sugar levels handle the sugar spike following a meal.”

Each 12-ounce can of Good Idea delivers 2.6 grams of a fixed-ratio combination of the five key aminos, plus 29 micrograms of chromium picolinate.

Good Idea waters are meant to be drunk prior to and during high-glycemic meals. They are entirely free of sugar and artificial sweeteners.

The goal, says the company, is to give at-risk individuals a new strategy for glucose control—one that they can easily incorporate into their daily lives, and will actually want to use because it is enjoyable.

These beverages are not intended as “treatment” for hyperglycemia, and they certainly cannot compensate for chronic high-glycemic eating patterns. But they can help mitigate the highly detrimental glucose excursions that often follow carb-rich meals.

Good Idea should be good news for the 86 million Americans that the Centers for Disease Control estimates have metabolic syndrome or “pre-diabetes”.

The Lund center has already supported three human clinical studies of the components that make up Good Idea. More trials, including one here in the US, are in the works.