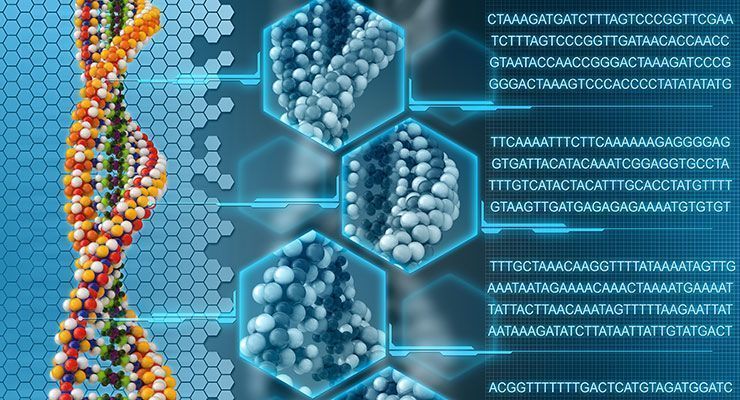 The era of personal genomics has arrived. Patients are walking into our offices armed with the passwords to their 23andMe results, and they expect us to help them make sense of it all.

It seems like a daunting task. But the truth is, you do not have to become some kind of gene wizard overnight to begin interpreting personal genetic data. Becoming familiar with a few key SNPs (single nucleotide polymorphisms) will give you points of entry into the fascinating world of genomics.

When patients send those saliva kits away, the receiving companies are usually doing one of two things; testing for specific SNPs or sequencing the whole genome.

You can think of specific SNP testing (like 23andMe) as taking snapshots of your patient’s genetics, while genome sequencing is more like a video. We don’t necessarily know what the meaning of an entire genomic sequence is—but as scientists discover more and more SNPs, we’ll be in a better position to translate more of those snapshots into clinically actionable information.

The world of genomics is, admittedly, complex and rapidly changing. But we are not doing our patients any favors by ignoring it and leaving them to their own devices to figure out what’s meaningful within the myriad genomic messages they’re obtaining.

Here are five clinically significant SNPs that can provide you with footholds for getting started.

In my practice, the most asked-about gene is MTHFR, which codes for the enzyme, methylenetetrahydrofolate reductase, located on chromosome 1. At least 40 mutations, or SNPs, in theMTHFRgene have been identified. MTHFR is the rate-limiting enzyme in the methylation cycle. It has direct impact on conversion of homocysteine into methionine, and on the methylation of folate to create the active form of the vitamin.

Variations in the MTHFR gene determine whether someone is a so-called “fast” or “slow” methylator.

Poorly or non-functioning MTHFR results in high levels of homocysteine in the blood stream, and the resultant hypercoagulability, cognitive problems, depression, and blood clots to the veins and arteries going to the eye.

People with MTHFR defects will have impaired ability to utilize folic acid, and will likely show symptom patterns suggestive of folate deficiencies even if their dietary intake seems to be “adequate.”

MTHFR mutations have received a lot of attention, especially in functional medicine circles, because they are among the most clinically actionable of SNPs. Patients with MTHFR mutations can simply take methylated folate and B vitamins to lower their homocysteine levels, and compensate for the downstream deficiencies that tend to occur as a result of the genetic defects.

The APOE gene on chromosome 19 makes apolipoprotein E, a protein that carries cholesterol and other lipids in the bloodstream. But the current interest in the APOE gene is not cholesterol-related. Rather, it has to do with risk of Alzheimer’s disease. Having the e4 allele in APOE increases one’s risk for late-onset Alzheimer’s by inducing deposition of beta-amyloid protein into plaques in the brain—the hallmark for Alzheimer’s.

James Watson, the co-discoverer of the DNA double helix, did not want to know whether he had this mutation when his own genome was sequenced.

It’s a scary thought. But let’s remember that we have 2 copies of each gene. The most serious risk for Alzheimer’s lies in people who have two e4 alleles. People who are homozygous for the e4 allele have an eleven-fold increased risk of developing Alzheimer’s.

On the somewhat bright side, in people who do have Alzheimer’s, a new drug called bapineuzumab was found to specifically benefit those who had at least one e4 allele. This drug, when given to e4 patients, did reduce tau and amyloid-beta proteins, though there was no improvement in cognition. Some researchers think bapineuzumab may have a role in Alzheimer’s prevention in patients who don’t have symptoms but test positive for the e4 allele.

While there’s no magic bullet for preventing Alzheimer’s, there’s a lot that e4-positive people can do to increase the odds that they end up among the 45% of carriers that do not get the disease.

It is definitely important to treat depression, whether with medications, psychotherapy or nutrition-based interventions. Minimizing stress is also important; indeed, risk of Alzheimer’s is inversely correlated with engagement in leisure activities.

Omega-3 fatty acid supplementation should become part of any at-risk patient’s regular vitamin regimen. B-complex vitamins make sense too, since B vitamin levels tend to be lower in Alzheimer’s patients. Physical exercise is a must. Getting adequate sleep, eating a healthy diet, and challenging one’s brain with mental stimulation like trivia games and crossword puzzles are also pillars of Alzheimer’s prevention.

Have your patients asked you about the “BRCA gene”? It’s certainly been in the mainstream media often enough.

The BRCA1/BRCA2 genes are tumor suppressor genes. When they are inactivated by an errant G (guanine) allele, the risk for breast cancer and ovarian cancer increases substantially. For breast cancer, up to 65% of women with the mutation in BRCA1 will be affected by a risk increase; for BRCA2 the percentage is closer to 45%.

Remember that insurance companies will pay for the BRCA testing in women with close relatives affected by breast cancer—but not for general screening services like 23andMe or whole genome testing. If a patient is low-income, it may be prudent to prescribe a limited genetic testing panel, like the one offered by Myriad Genetics, instead of 23andMe to ensure a lower overall cost.

Women with positive BRCA results should see a breast specialist to discuss the options, which are admittedly limited. Some women may choose to undergo an elective mastectomy and/or oophorectomy, following the logic that organs that no longer exist cannot be affected by cancer.

For others, the genetic information may motivate a serious commitment to follow a cancer-fighting lifestyle, perhaps quitting a stressful job and following a vegan diet. Increased screening in the form of more frequent mammograms, ultrasounds, or breast MRIs will be important for these patients.

If you prescribe medication, SNPs in the CYP2C9 gene should have your attention. “CY” genes are cytochrome genes, the enzyme products of which break down medications in the liver.

There are several SNPs that can occur in the CYP2C9 gene. Some of these cause increased metabolization of drugs, meaning that drugs get broken down more quickly. Others will decrease metabolization, meaning that active drug metabolites stay in the bloodstream for longer periods.

The CYP enzyme systems affect many medications, including ibuprofen and aspirin. Information about a patient’s CYP2C9 status becomes particularly important when considering a prescription for warfarin or clopidrogel (Plavix). The increased or decreased coagulation activity can be life-threatening to patients who take these medications after strokes or myocardial infarction.

It makes good clinical sense to get the genomic lowdown on CYP2C9 for high-risk patients, ideally before they have an event.

Another key gene is CYP2D6. Depending on what SNPs a patient has and how many copies, this CY might cause someone to be an ultra-slow metabolizer of many medications, an ultra-rapid metabolizer, or something in between. The “ultra-rapids” typically have more than one copy of a 2D6 SNP.

Roughly 25% of all prescribed drugs are affected by CYP2D6, and a huge number of psychiatric drugs will have more or less efficacy or toxicity depending on the genetics of the individual patient.

It’s tricky to sort all of this out because one drug may be only mildly toxic while its next breakdown product may be quite toxic in high amounts all at once. So for a given drug at a given dose, an ultra-rapid metabolizer might be in real danger of toxicity while a slow metabolizer would not be so.

If you’ve got a patient who is starting treatment with psychiatric medication, or for that matter, any other medications, but does not want to do a genetic test, there is a simple non-genetic work-around involving the drug,debrisoquine.

This antihypertensive agent is similar to guanethidine, which used to be a mainstay in blood pressure control. Clearance of this drug happens to be a good indicator of someone’s CYP2D6 status. The test involves measuring the ratio of the drug and its metabolic breakdown product in the urine six hours following ingestion of a single dose.

The more you know about how a patient is likely to metabolize commonly prescribed drugs, the better. In the future, medic-alert bracelets may feature SNP mutations in order to guide doctors caring for patients in an acute care setting. We’re not there yet, but it is certainly an issue worthy of our attention.

Genetics can be overwhelming, but the best way to help your patients who may be at an increased health risk due to genetic factors is to encourage early testing. Then, you can use the results to guide your recommendations for lifestyle, medications, and preventive measures. As with many things in life, the best way to get started in genomics is simply to get started!

Monya De, MD, MPH (https://twitter.com/medjournalist) is a wellness-focused internist and medical journalist practicing in Santa Monica, CA. Dr. De graduated with her MPH from the University of California, Berkeley School of Public Health, and earned her MD degree from the University of California, Irvine. She received her undergraduate degree with honors in human biology from Stanford University. She is affiliated with Proactive Health Labs, and is a physician for Heal, a California on-demand housecall service. In addition to her clinical work, Dr. De has been a medical reporter for ABC News.