On June 7, agents from the US Attorney’s office in Southern California arrived at the headquarters of the Irvine-based company, whose Opioid Risk Profile is marketed as a gene-based test 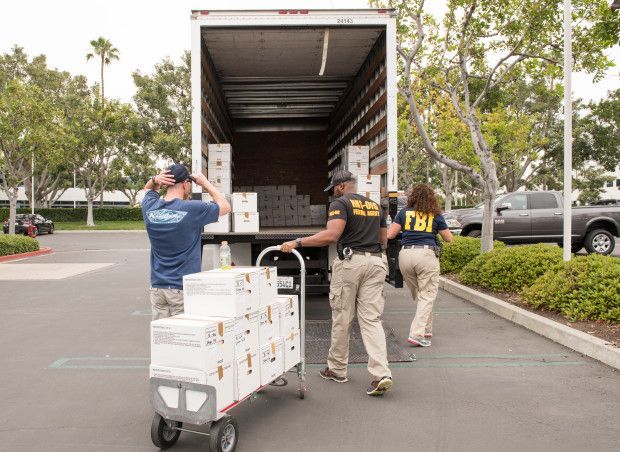 to determine predispositions to opioid addiction. For the past six years, Proove has promoted the test as a tool to aid physicians in making the best decisions related to patients’ pain management. Critics say it’s nothing more than a money-making strategy backed by questionable science, charges the company categorically denies.

In what media sources described as a raid, officers from both the FBI and the Department of Health and Human Services (HHS) delivered to Proove a subpoena and executed a search warrant, removing documents from the company’s office. Proove issued a press release shortly thereafter, insisting that “there was no ‘raid’, nor have there been any ‘arrests’ or ‘indictments'” associated with the incident. The company, it said, “will continue to cooperate with any future requests for information from the government.”

The federal action, which received some local media coverage but limited national exposure, was covered by STAT News —an independent healthcare and biotech news outlet owned by Boston Globe Media.

STAT’s has covered Proove several times, challenging the company’s science, its clinical claims, and its marketing practices. In an article posted in late February 2017, STAT writer Charles Piller pointed out that the company was already under scrutiny by the FBI for “possible criminal wrongdoing.” Current and former employees cited in Piller’s article stated they were questioned by federal agents about “possible kickbacks involving payments to doctors.”

STAT also conducted its own independent analysis of Proove, through which it obtained and published documents illustrating what Piller described as, “largely a ploy to boost Proove Biosciences’s revenues.”

Among these documents was a copy of a Proove sales brochure indicating that physicians were promised $30 for each person they enrolled in a study of genetic tests intended to guide personalized pain treatment.  STAT claimed that a typical doctor could make $144,000 a year in “research fees” without ever conducting any actual research, raising questions about Proove’s  incentive strategies.

An estimated 400 doctors around the US have been using the Proove opioid test, which is based on cheek swab DNA sampling. STAT contends that, “the way the company pays physicians involved in two ongoing Proove trials — both key to the firm’s monthly revenues of roughly $2 million — might violate anti-kickback laws.”

Piller and other critics also say that the company exercises coercive marketing tactics. Proove has purportedly stationed its employees inside doctors’ offices, where they completed tasks including filling out evaluation forms on behalf of the physicians.

There are also questions about the science behind Proove’s test–and, for that matter, any gene-based test for addiction risk.

Some addiction and genomics experts interviewed by STAT say Proove’s test is inconsistent at best, highly dubious at worst. They point out that it has not been adequately studied in clinical trials–a common problem with newly emerging tests in general. In a December 2016 piece, Piller posited that Proove opportunistically exploits mounting fears about opioid addiction within the medical community.

Then, and now, the company denies any wrongdoing.

Proove’s CEO, Brian Meshkin, stands by the accuracy and legitimacy of his company’s products. He argues that Piller’s “defamatory” coverage of the opioid risk profile inappropriately portrays the company in a negative light and, furthermore, played a direct role in prompting the federal investigations now underway. The STAT publications, Meshkin told HPC, are rife with “many inaccurate claims that have been terribly damaged not only our reputation, but affected our collaborators and customers.”

“We are disappointed in the process that allowed these unverified claims to be published and then pique the interest of federal agents,” Meshkin added.

In an official response to Piller’s articles, Proove stated that the company “reimburses participating investigators only for the time they spend providing research services. No research or payment is tied to the number of tests ordered, patients referred, or the size or prestige of an institution or medical practice. Investigators are required to submit completed and signed time records, as well as the original source research documents to support an audit of their time records.”

Proove reports that the major source of the company’s income is third-party reimbursements for laboratory procedures and services.

In a series of official statements, the company responds to STAT’s main allegations, arguing that the news site’s December 2016 and February 2017 articles, “contained many errors and misstatements about Proove®’s technology, science, business practices, and leadership. Even more disturbing was Mr. Piller’s overall approach and obvious bias. In an age where anyone can post “fake news” online, both pieces contained errors of omission, lacked context and/or perspective in key areas… featured some sources that have no knowledge of our company or our emerging industry, and relied on information – much of it incorrect and/or misleading – provided by disgruntled and discredited former employees.”

Meshkin says the company is standing by its methodology, claiming that, “There are five clinical studies demonstrating the high accuracy with which the Proove Opioid Risk® profile performs. These studies were conducted in 126 clinics throughout the United States, which specialize in orthopedics, pain management, psychiatry, primary care and addiction treatment. The accuracy of the test, as measured by the gold-standard of statistical methods, ranged from 76.7% to as high as 96.7%. Three of these studies supporting the algorithm in Proove Opioid Risk® have been accepted for publication in peer-reviewed publications…with 6 additional studies currently under review.”

Proove’s leaders are consulting with both in-house and external legal counsel, and “pursuing all possible legal actions to recover damages and protect itself from further harm from these defamatory allegations.”

In our Summer edition, Holistic Primary Care reported on Proove’s test, and the broader questions of whether genomics can be used clinically to predict addiction risk. At the time of writing, we were unaware of STAT’s allegations about coercive marketing and kickbacks.

However, our previous article did underscore the fact that so-called “laboratory-developed tests” like Proove’s, fall into a regulatory netherworld with little to no federal oversight. The government defines LDTs as part of a larger class of in vitro diagnostic devices “intended for clinical use and designed, manufactured and used within a single laboratory,” but does not require the FDA to oversee the development or marketing of LDTs.

This regulatory loophole allows manufacturers to produce and promote novel tests or devices without extensive clinical testing or premarket approval from the FDA or any other federal body.

Reps. Larry Buchson (R-IL) and Diana DeGette (D-CO), propose to remedy this situation. They recently released a draft of their bipartisan bill entitled the Diagnostic Accuracy and Innovation Act (DINA) that would reclassify LDTs, put them under FDA jurisdiction, and require their premarket approval.

Given the current climate in Congress, the behind-closed-doors healthcare negotiations, and the generally anti-regulatory views prevailing in the Trump administration, this bill is unlikely to generate much political excitement. But the Buchson-DeGette draft does indicate that the issue of LDTs, and the lack of clear regulations, is on the radar of some legislators.

However it shakes out, the controversy now surrounding Proove serves as a stark reminder of the need for clinicians to be cautious with any rapidly developing medical technology. Dozens, if not hundreds, of genome tests have emerged in the last few years. Many testing companies are marketing at functional, holistic and naturopathic medical conferences, hoping to catch the wave of clinician enthusiasm for personalized medicine.

No doubt, it is challenging to balance the desire to be on the leading edge of innovation care while guarding onesself and one’s patients from questionable products and services. It behooves practitioners — and those they treat — to approach technological advancements with a healthy dose of vigilance. The desire to help patients with new tools must be balanced with an equally keen eye for good science. Without substantial changes in federal regulations, the clinical community cannot count on the government to do this for us.