Dancing to the End of Life: Movement Therapy Transforms Eldercare 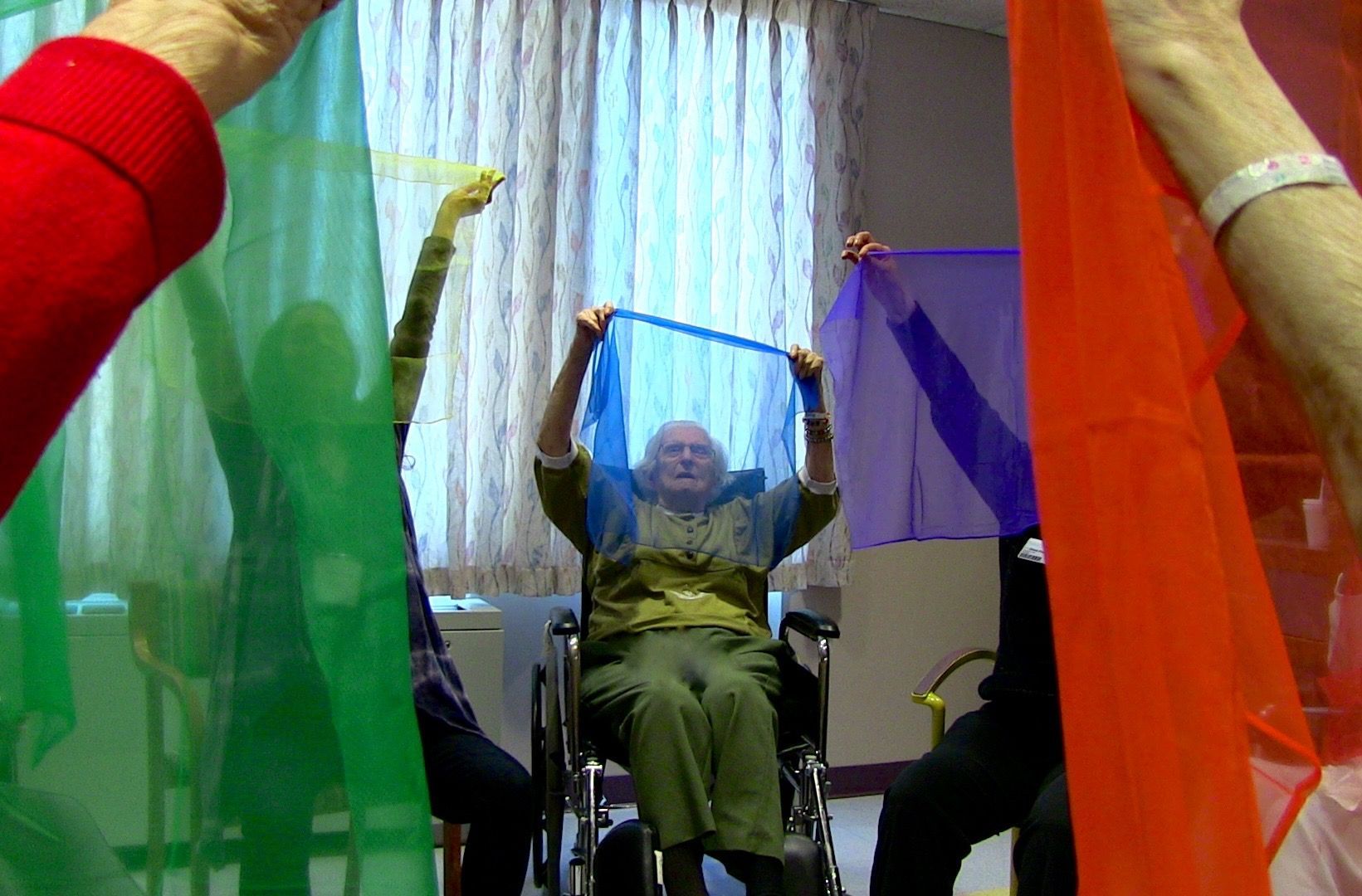 Say the word “dance” and most people think of young, able-bodied people moving with freedom and vigor. It’s not something we typically associate with aging or the end stages of life.

But dance/movement therapy, with its unique potential to address not just the body, but the mind and spirit, is a powerful and effective way to help the elderly access a vital sense of self. In this context, dancing is not about impressive shapes or getting the steps right. It’s about a shared experience of humanity and connection, one that manifests in movements as small as a toe tapping, a shoulder stirring, or a slight shift in affect.

Some of the greatest challenges the elderly face are isolation, physical inertia, and loss of independence. It is not uncommon in long-term care settings to find rooms full of elders sitting for hours in front of a television, their shoulders slumped, heads lowered, sleeping the day away.

Though it is important to honor the natural slowing down and physical decline that occurs with aging, it is also beneficial, at times, to respectfully interrupt such inertia with activities that promote meaningful engagement.

In my work as a dance/movement therapist at the Hebrew Home at Riverdale—an internationally recognized eldercare facility now celebrating its 100th year—and other institutions, I have seen the profound positive impact that dance and movement have in the lives of older people. It is far more than just a pleasant diversion; it is real medicine.

With the world’s elderly population projected to nearly double by 2050, and cases of dementia and depression expected to rise in tandem, there is great need for holistic, non-pharma interventions that strengthen cognitive, psychosocial, and motor function, and improve overall quality of life. There’s research showing that dance/movement therapy can greatly improve mood state among the elderly, as well as enhance cognitive function and sensorimotor performance (Kshtriya, Barnstaple, Rabinovich, & DeSouza, American Journal of Dance Therapy, 2015).

Therapeutic dance interventions can also help to prevent falls, improve gait and balance, and reduce the need for pain medications. And many elders find it more enjoyable than other forms of physical activity.

Dance/movement therapy is defined by the American Dance Therapy Association as the psychotherapeutic use of movement to further the emotional, cognitive, physical and social integration of the individual.

I witness daily the unique power of movement to transform inert eldercare environments into spaces of aliveness, play, possibility, and connection.

At the end of a dance therapy group on a skilled nursing unit, I ask the residents: “What does dancing do for you?”

“It gives you a good feeling,” one says. “It energizes you,” says another. “It’s like being young again – like you can do anything,” says a third.

Both music and movement stimulate the brain’s reward centers, with some overlap. Together they increase the number of activated pleasure centers. Krakauer also traces the pleasure of dancing to the neural processes of mirroring, attunement, and shared social experience. (Krakauer, Scientific American, 2008).

In eldercare settings, the benefits of dance therapy extend far beyond the residents. As the music comes on and a more buoyant energy begins to fills the space, nursing staff often can’t help but join us. Even the housekeepers, social workers, and administrators sometimes join in as they pass by.

For staff, dance therapy can provide relief from the routine stress of high-pressure medical jobs, allowing a window, however brief, to release physical tension, and to engage with residents on a more holistic level.

As an embodied and community-oriented modality, dance therapy creates an atmosphere that moves people beyond the usual patient-staff roles and into a shared experience of joy and humanity. And that’s healthful for everybody!

Most of the people I dance with daily are in wheelchairs. Their cognitive and physical abilities vary widely. While encouraging participation, it is also important to consider safety—both physical and emotional.

Before I do anything else, I put on pleasant music. I often choose songs that residents will recognize, to create a sense of familiarity and ease: classics like Frank Sinatra or Ella Fitzgerald, and at other times, more upbeat tunes like ‘Lovely Day’ by Bill Withers, or Latin dance music to lift the energy.

Already, there are feet and fingers tapping along to the beat. That may not seem like a big thing but with elders, these micro-movements are significant. “In this class, we focus on what we can do,” I tell the residents. “A little bit of movement goes a long way.”

Next, I rearrange the room so the residents are in a circle, facing each other. It’s a vast difference from the usual array of rows facing the television, and this new configuration immediately shifts the scene and quickly catalyzes greater interpersonal connection.

Now able to see each other more directly, the residents begin to initiate conversation and pay more attention to their environment. This often manifests in changes in posture too: chests tend to lift, eyes open wider, and I observe an overall increase in alertness.

To encourage safety, I remind residents to take care of themselves; to stop or adjust the movement when they feel pain; to do it their way, not mine.

A central tenet of dance/movement therapy is, ‘meet the clients where they are.’ This means using movement generated from each client as a starting point, and potentially building from that to increase range of motion and expression. This fosters safety, as the movement is coming from the client’s own abilities and limitations.

With our hands open, we look around the circle, noticing everyone present. And if vision impairment prevents this, I remind them that even if they can’t see well, perhaps they can feel that they are part of a big, beautiful circle.

Then, we take stock of our experience by naming what we’ve created together. “Fun,” “Togetherness,” “Happiness,” and “Energy,” are words commonly shared.

Sometimes themes emerge: motifs of flying, swimming, grocery shopping or cleaning the house, for example. These provide a space for reminiscence and symbolic expression, allowing residents to process their current situation, and their past, through the movement experience.

Finally, sensory props are a great way to increase participation and encourage self-expression. Props that tend to work well 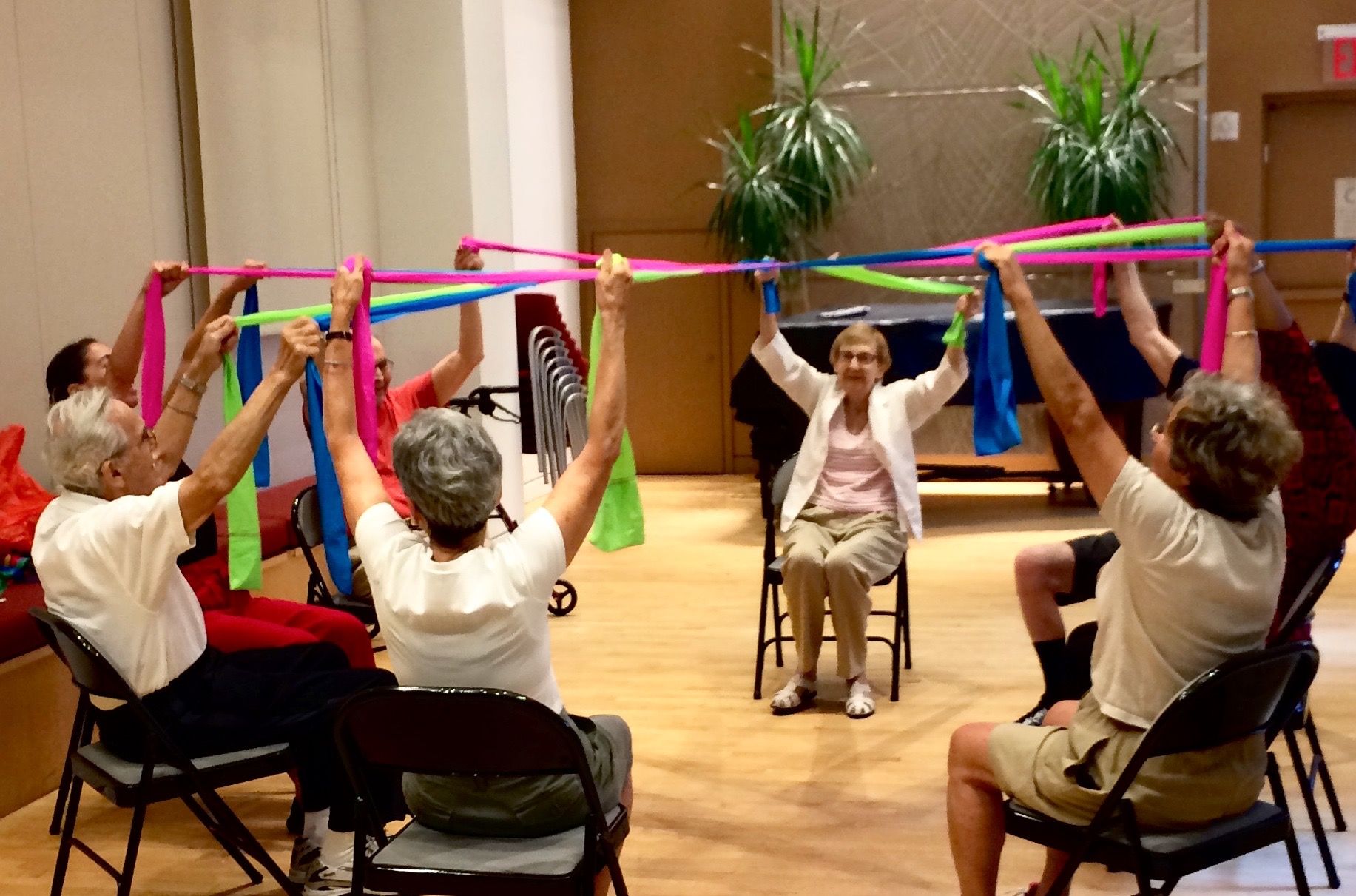 with elderly people include: Ribbon wands or chiffon scarves, to magnify and extend reach and range of motion; Egg shakers or maracas, to deepen a sense of rhythm; The Octaband, created by dance/movement therapist Donna Newman-Bluestein specifically for this population, to enhance group synchrony; and Large 24” balloons, to engender focus and directness in movement, as well as whole-body participation.

It can also be fun to bring special props for holidays, or use ordinary everyday objects like paper plates or newspapers to change things up. Get creative!

It’s hard not to feel joy while watching M, 92 years old. The pleasure she radiates while dancing is contagious: her energy quickly shifts the overall tone of the room, inspiring peers and staff toward alertness. M’s dance affects everyone!

Other residents come alive when she dances: they watch her with brightened affect. Some wheel or walk themselves over to join her. Even “passive” participants – residents who either can’t engage actively due to medical conditions or opt not to– can still benefit from M’s dancing through resonance, described by Young as “a mutual sense of aliveness, breath and a continuous rhythmic interconnectedness…a vibration or pulsing energy” (Young, American Journal of Dance Therapy, 2017).

Research on mirror neurons suggests that when we watch someone in motion, the same neural pathways fire in our brains as if we ourselves were performing the action. M’s dance is a gift that allows those witnessing it to experience her movements as if they were their own. In that sense, we could revise Krakauer’s statement to say that dancing is a “pleasure triple play.”

For M, dance/movement therapy has become an important source of meaning, purpose, and vitality, catalyzing a notable wave of growth for her in her ninth decade.

When I first met M, she was barely speaking, expressing or emoting—despite a lifelong history of dancing. A series of medical challenges and falls had limited her ability to move, and required her to use a wheelchair. Following that transition, M had grown severely depressed and withdrawn.

But things radically shifted when dance/movement therapy was added to her unit.

In our first few sessions, I observed M tapping her feet and moving her hands in her lap. The movements were primarily distal (in her hands and feet) and one-dimensional: simple up/down movements in one plane of space.

Then, during one memorable session, a lively Harry Belafonte song played through the speakers. I watched in awe as the flow of movement spread from M’s hands and feet, to her shoulders, head and hips, until her entire body was moving as a unified whole. The music tapped a wellspring of energy, enthusiasm, and vitality that expressed itself as whole-body movement.

After actively dancing, I notice that M is more alert with greater access to her memories. She is often more talkative, readily sharing stories and observations both from her present and from her past. I recall one session after which, M exclaimed: “Oh! I remember where I’m from!” She proceeded to share memories of her childhood in St. Croix—like dancing as a little child in the backyard to her uncle’s trumpet, circling the maypole as a young girl.

It’s been two years now, and M dares to keep dancing, despite a host of medical challenges. She attends dance therapy regularly, and thanks to a round of physical therapy and strong staff support, she is now able to get out of her wheelchair and dance with a walker.

One of her favorite songs is “The Twist” by Chubby Checker, to which she proudly rises, twisting her hips while coaching nearby residents and staff to “go low”. “Dancing in the Street” by Martha and the Vandellas is another fave, during which M stays seated but wheels herself to the center, spinning and maneuvering her chair to the rhythm and bouncing in her seat, as her peers clap and cheer her on.

Dance/movement therapy gave M a forum for self-expression, leadership, and restored sense of purpose: a place to feel vital and valued. Her dance defies stereotypes of aging and shines as an example of resilience and grace.

Her’s is just one story to emerge from a growing tribe of elderly dancers who remind us that even as the physical body declines, the spirit can continue to move us toward enriched connection, expansion, and discovery.

A group of elderly residents say it best, in a poem written at the end of a session. It is titled Dare to Dance, shared here with permission:

I dare to dance because…

everybody else is dancing

it makes me feel young again

I dare to dance because…

it fills me with happiness

I don’t care what anybody thinks

I dare to dance because

your spirit’s inside your body

your movement’s inside your body

I dare to dance because

when I dance I am free, like a fairy

I dare to dance

to put joy in my heart

to express my self

to be part of a community

Ali Schechter, R-DMT, LCAT, is a Registered Dance/Movement Therapist and Licensed Creative Arts Therapist specializing in geriatric care. She holds an MS in Dance/Movement Therapy from Sarah Lawrence College and a BA in Dance and English from Columbia University. Ali works primarily at the Hebrew Home at Riverdale—an internationally recognized eldercare facility now celebrating its 100th anniversary. She is the founder of Full Circle Dance, an advocacy initiative to improve quality of life for seniors through movement and creative arts therapy. Ali has developed innovative intergenerational dance experiences for DOROT, Hazon and the Alzheimer’s Association of New York, and offers staff trainings on applying dance/movement therapy within eldercare settings.