Earlier this year, the small state of Vermont passed an historic GMO food labeling bill with huge implications for business and agriculture nationwide.

Signed into law by Gov. Peter Shumlin in early May, the bill will require food manufacturers to disclose the use of genetically modified ingredients in all food products sold in the state by 2016. (http://www.leg.state.vt.us/docs/2014/Acts/ACT120.pdf).

Many food producers, grocery trade groups, and agricultural companies are not happy. Fighting mad is more like it.

Though it’s not the first state in the country to legislate GMO labeling, Vermont’s new law is the most comprehensive to date. Both Connecticut and Maine have passed laws mandating labels on foods produced via genetic engineering—but those mandates will not go into effect unless and until a number of neighboring states also pass similar legislation.

The Vermont law, by contrast, is unconditional. It has no contingencies, and simply requires that manufacturers take action to label GM products regardless of legislative efforts elsewhere.

Further, it prohibits use of the word “natural” and other “words of similar import” for any foods that contain GM ingredients. Manufacturers wishing to continue to sell their products in the Green Mountain state must comply with the new labeling requirements by July 1, 2016.

Despite massive support from consumers, Vermont’s GMO mandate has met major resistance from the food and biotech industries. Just weeks after the law passed, four major food organizations—among them the Grocery Manufacturers Association, a trade group representing some of the world’s largest food and beverage companies including Coca-Cola, Dow, and Monsanto—filed a lawsuit against the state of Vermont in federal district court, asserting that its new labeling requirements are unconstitutional.

The industry group also asserts that Vermont’s law unjustifiably singles out processed foods, and that the mandate will increase food prices and restrict free trade across the country. It portrays the law as a “costly and misguided measure” that threatens to “set the nation on a path toward a 50-state patchwork of GMO labeling policies that do nothing to advance the health and safety of consumers.”

GMA and other trade groups take the stance that there is no inherent health threat associated with ingredients made from genetically modified plant or animal sources, and that mandatory labeling constitutes a de facto implication of risk.

Some within the food and supplements industries believe that if consumers want the option of purchasing GMO-free products, the burden of certification and labeling should be on companies that want market advantage by meeting that consumer demand.

They argue that there is no requirement to label foods made from plants grown with federally-approved pesticides.

Supporters of the Vermont initiative contend that taking the “GMO-free” approach rather than mandatory GMO labeling gives unreasonable advantage to large agricultural interests, and essentially penalizes growers and manufacturers trying to provide foods in a more natural way.

Given the millions of dollars that the GMA and Monsanto have poured into previous anti-GMO labeling campaigns, the current lawsuit did not come as a surprise to Gov. Shumlin.

In anticipation of the backlash, the Vermont bill calls for the establishment of a legal defense fund—since dubbed the Food Fight Fund—through which donors can make contributions to help defend the law in court. Without additional support, Vermont’s limited budget and small size—the state’s entire population is around 625,000—will be no match in a lengthy legal battle against the biotech behemoths.

GMO labeling advocates across the country are keeping close tabs on this critical and controversial fight, the results of which will set a precedent for similar legislative efforts throughout the nation. According to the Center for Food Safety, over 60 bills to require GM labeling or prohibit genetically engineered foods have been introduced in more than 20 states

If the Vermont law is overturned, the defeat may discourage other states from pursuing GMO-related initiatives. In two Oregon counties that recently banned GM crop farming, opponents have suggested the possibility of legal retaliation based on the state’s right-to-farm law.

Should Vermont succeed in court, it’s unclear exactly how GMO labeling will affect local commerce. Currently, the vast majority of corn, soybeans, and other staple crops grown in the US come from GM seeds—and because most processed foods contain at least one GM ingredient—an estimated 80% of food products sold in the Vermont will be affected by the new law.

Skeptics have argued that manufacturers may simply elect to pull products out of this relatively small market, rather than change their packaging to comply with new requirements. 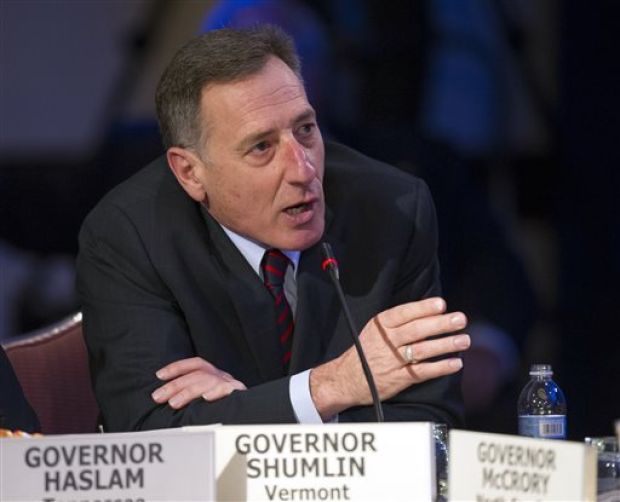 In a television interview, Gov. Shumlin explains that its small size is precisely what allowed Vermont—a state known for its family farming and local artisanal food industry—to pioneer mandatory GMO labeling. Across the board, he says, his constituents are united by an overwhelming desire to know what’s in their food—a viewpoint that he shares.

Vermonters aren’t the only ones who think we have a right to basic information about food. Over 60 countries—including China, Russia, and the entire European Union—have mandatory GMO labeling laws. EU mandates are so stringent that they even require meat suppliers who use genetically engineered animal feed to GM-label their products.

And yet, in the United States, there are no national labeling standards for GM products, and the food industry’s use of GM ingredients remains largely unregulated. The FDA has issued draft guidance on GM labeling for food manufacturers, but at this point, it’s a completely voluntary process.

Until the federal government takes a firmer stance–a step nobody expects any time soon–it will fall to the individual states and counties to self-regulate the use of GM crops and products.

Many consumers wonder why food manufacturers are so reluctant to disclose the use of GM ingredients. Should their lack of transparency be cause for concern about the health and safety of genetically engineered crops?

When asked about the industry pushback against his bill, Gov. Shumlin inferred a concern among food manufacturers that GMO labels may implicitly portray their products as being less wholesome or healthful than non-GM foods.

Proponents of mandatory labeling stress the unknown consequences of long-term exposure to GM foods. As noted in the Vermont law, there have been no epidemiologic studies in the US to examine the safety of human consumption of genetically engineered products.

The international scientific literature is filled with myriad negative, neutral, and positive health outcomes associated with GM foods, contributing to a “lack of consensus regarding the validity of the research and science surrounding the safety of GM products.”

Biotech advocates present genetically engineered crops as a vital resource for feeding the world’s poor, enhancing nutrition, and reducing the need for inputs like pesticides and water.

Opponents, on the other hand, point to a number of environmental consequences associated with large-scale GM crops, including increased monoculture, insect and virus resistance, and herbicide tolerance. There may be human health consequences as well, including antibiotic resistance, allergenicity, and exposure to pesticides.

One prevailing theme within the anti-GMO community is a concern about consumers’ unwitting participation in a widespread food industry experiment, the long-term health and safety outcomes of which are entirely unknown.

To some, the significance of Vermont’s battle against Monsanto and the GMA encompasses far more than a basic right to know what’s in our food—it also addresses larger issues of states’ rights to self-determination and peoples’ rights to safeguard their health.

The outcome of the Vermont lawsuit will undoubtedly set a tone for future GMO labeling efforts across the country. Until then, rather than cowering under the fear lawsuits, Gov. Shumlin hopes his efforts will encourage other states to follow Vermont’s lead in providing consumers with the nutrition information they want—and deserve—to have.