Scientists project that by 2050, the world’s population will reach a staggering 9 billion people. Our growing presence will undoubtedly impact the health of the planet in untold ways, raising significant questions regarding land use, agricultural production, and food security. 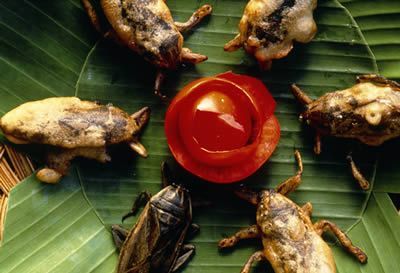 Packed with protein, very low in fat, and far less resource-intensive than other sources of animal protein, edible insects are an increasingly important component of the global food supply in the coming decades. According to a recent UN report, insects are a healthier and more sustainable option than beef, chicken and even fish. Above, water bug (Lethoceros indicus) tempura served in Chang Mai, Thailand. Image courtesy Peter Menzel/Photo Researchers, Inc.

Experts suggest that sooner rather than later, we need to identify creative solutions to these upcoming ecological challenges. One solution, proposed by the United Nations and other environmental advocates, may be hard for some to swallow. Their suggestion? Eat more insects!

Indeed, there has been a lot of…ahem…buzz about insect-based foods lately, and while mainstream American palates may not quite be ready for edible bugs, products made with insect proteins have begun to enter the natural foods and healthy living markets in this country.

Throughout the world, an estimated 2 billion people regularly consume insects, a practice known as entomophagy. Plentiful, relatively easy to raise (or capture) and much less expensive than other animal based proteins, a host of insects and other bugs including spiders and scorpions are a regular part of traditional diets in many African, Asian, and Latin American cultures.

In a 2013 report, the United Nations Food and Agriculture Organization (FAO) identified over 1,900 species of edible insects. Worldwide, beetles are the most commonly eaten type. But the huge range of edible insects reflects the extraordinary biodiversity of insect species and includes caterpillars, bees, ants, grasshoppers, and termites, among many others.

Insect eating is nothing new; in fact, it’s probably as old as humankind itself. It was certainly widely known in Biblical times. The Jewish Kosher laws defined in the Old Testament generally prohibit the eating of insects, with the exception of:

“Winged swarming things that go upon all fours, which have jointed legs above their feet, wherewith to leap upon the earth” (Leviticus 11:20).

The scripture goes on to define four types of locusts that may be considered kosher, though locusts are seldom found in the diets of orthodox Jews.

The New Testament does describe John the Baptist as living on “locusts and wild honey,” but generally speaking, insect eating is relatively rare in Christian cultures. Islamic rulings vary, with some schools deeming certain types of insects Halal (permissible) but others deciding that insects as a category are Haram (forbidden).

The Biblical restrictions are likely a major underlying reason why eating insects is so rare in countries and cultures with Judeo-Christian roots. In the rest of the world, however, edible bugs are a part of normal everyday life.

One of the most compelling arguments for more widespread insect consumption is their remarkable nutritional value. The unique nutrient profiles of various insect types are influenced by a number of factors—species, metamorphic stage, habitat, diet, method of preparation—but generally speaking, they’re packed with protein, fiber, healthy fats, and essential vitamins and minerals.

The FAO report notes that some bugs are arguably even more healthful than conventional animal products. The protein content of certain insects is higher than that of chicken, eggs, and beef. And mealworms contain unsaturated omega-3 and omega-6 fatty acids in amounts comparable to those found in fish—and higher than those in cattle and pigs.

In recent decades, cultures throughout the world have adopted increasingly westernized diets, with an emphasis on red meat consumption. Experts argue that at current rates, meat production cannot keep pace with the demands of a growing global population. Adequate protein intake is already a major concern for the world’s 1 billion chronically hungry people.

Insect farming could play a key role in addressing these challenges.

In addition to their human health benefits, insects are an exceptionally sustainable food source. Widely accessible and abundant on earth, they comprise up to 80% of the entire animal kingdom; the class insecta alone contains more species than all other animal classes combined!

Relative to cattle farming, which requires huge amounts of grain, water, and other inputs, insect farming utilizes far fewer resources. As reported in a recent edition of National Geographic, for a given quantity of feed insect farmers can produce vastly more edible protein than can beef, poultry or pork farmers.

It takes roughly 100 pounds of animal feed to yield 10 pounds of beef. In contrast, 100 pounds of bug fodder can yield 45 pounds of edible crickets. Indeed, crickets are estimated to be 20 times more efficient than cattle as a source of protein.

Edible insects also produce significantly smaller quantities of greenhouse gas. Livestock farming is one of the largest global contributors to greenhouse gas emissions, a known cause of climate change. Because insect farming is much cleaner than cattle farming, “insects could serve as a more environmentally friendly alternative for the production of animal protein.” (Oonincx at al. PLoS One. 2010; 5(12): e14445).

While the thought of eating bugs intrigues some adventurous foodies, it’s one that many others just can’t stomach. It questions our core sense of what is—and isn’t—appropriate to eat.

Insect-eating advocates suggest that westerners’ psychological barrier to bug consumption is a learned, cultural one. From a young age, we’re taught that insects are dirty and gross and should be removed from our home environments, especially from our kitchens.

With the right reframing, squeamish skeptics might be able to unlearn their cultural aversion to bugs as food. Proponents argue that eating insects is really no different from consuming other wildly popular edible invertebrates like crabs, lobsters, or shrimp.

They also question our perception of insects as dirty creatures. Several major categories of edible insects, including grasshoppers, beetle larvae, and moth and butterfly larvae, eat a diet of fresh plant leaves and wood— which is much cleaner and more hygienic than the decaying animal flesh eaten by crabs and lobsters, to say nothing of the questionable sanitary conditions at the massive feedlots or poultry farms where most of our cattle, pigs and chickens are raised.

These companies have capitalized on the belief that bugs represent the future of healthy, sustainable food. If they’re right, it may be only a matter of time until insect meal replaces protein powder in post-workout shakes and elsewhere in our diets.

The FAO has already issued a call to action, urging that, “what we eat and how we produce it needs to be re-evaluated. Inefficiencies need to be rectified and food waste reduced. We need to find new ways of growing food.”

Eating bugs might just be one of those new ways.