Climate Panel: “Uncertainties Are Mostly on the Bad Side”

There’s nothing new in the American Academy for the Advancement of Science’s current report on climate change. 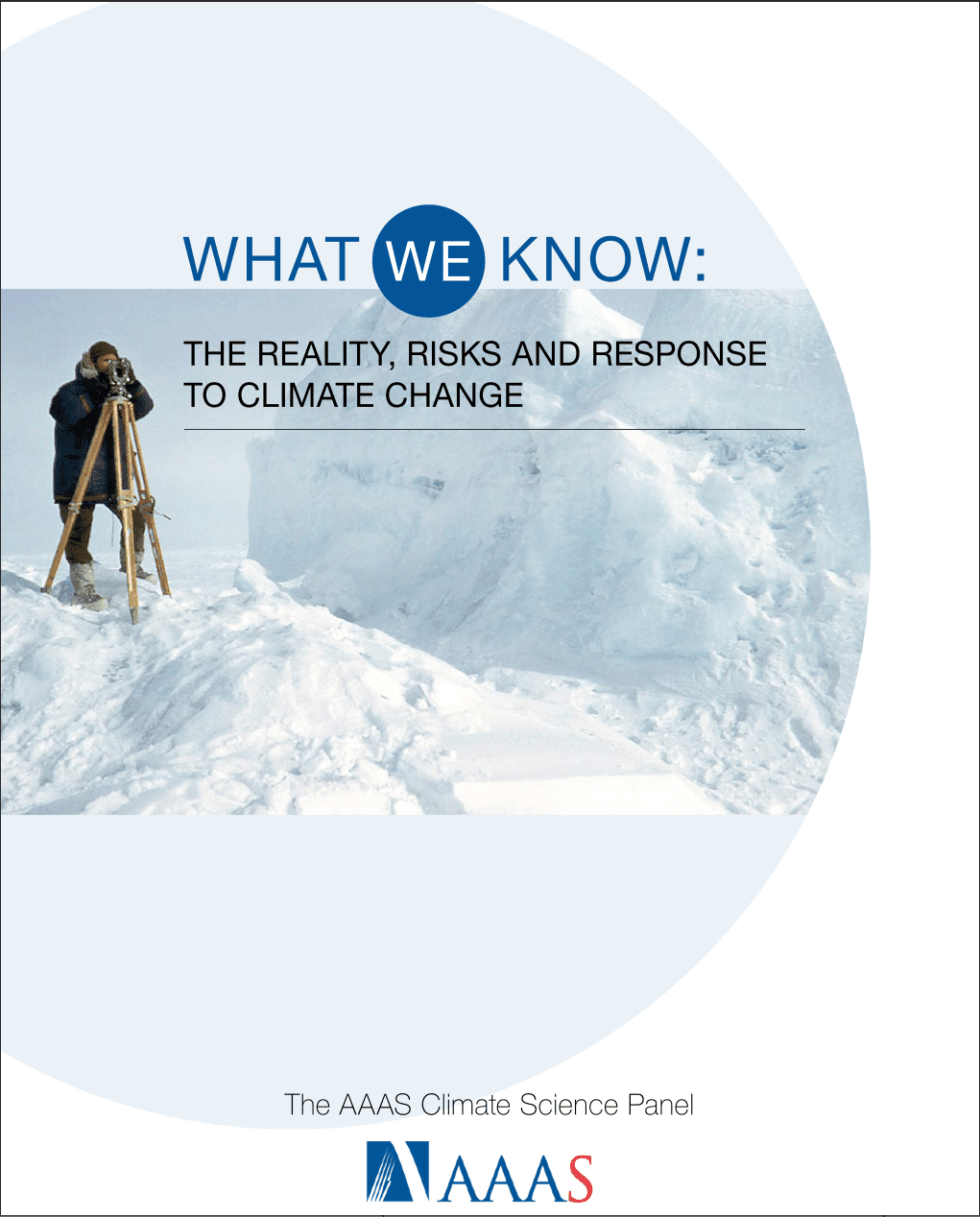 But in this case, no news is very definitely bad news.

In it’s slim but substantial 28 pages, AAAS’ What We Know: The Reality, Risks & Response to Climate Change, summarizes the core science in terms and analogies understandable to anyone with a high school education. It also underscores how little has changed though much about climate change was known decades ago.

What IS new is the tone of urgency from a generally conservative organization, and the near unanimous consensus among top climate scientists that: A) serious change is real and largely man-made; B) we’re pushing the limits of the planet’s adaptive capacity; and C) there’s much we can still do to avert disaster if we act right now.

“The uncertainties are mostly on the bad side,” says Richard Alley, Professor of Geosciences at Penn State, dismissing the widely held notion that there’s still any room for debate about climate change or its causes.

“The risk is that our future will get worse than we expect because of abrupt climate change. Gradual climate changes will surprise us with abrupt jumps that hurt economies or ecosystems,” said Dr. Alley, a member of AAAS’ 13-member Climate Science Panel—a Who’s Who of esteemed meteorologists, environmental scientists, oceanographers, physicists and biologists. What We Know, was published on March 18, and is available for download free of charge.

AAAS is the world’s largest general science organization, and not known for radical stances. The group now claims that, “Based on well-established evidence, about 97% of climate scientists have concluded that human-caused climate change is happening,” and that, “Earth’s climate is on a path to warm beyond the range of what has been experienced over the past millions of years.”

Marshall Shepherd, 2013 President of the American Meteorological Society, notes that, “We know that climate change is real, we know that our weather is being impacted. It is important to move beyond the debate and start finding solutions.”

Unfortunately, that’s precisely where What We Know falls short. The AAAS committee pulls no punches in urging immediate action, but beyond a general admonition to “curtail the burning of fossil fuels as our primary energy source and releasing the CO2 to the air,” there are no actionable suggestions or specific guidance on what we, as a nation should do to avert climate disaster.

“Too often we see it as a trade-off….either we can make money or we can be friendly to the planet, but we can’t do both. The real truth is that in many cases we CAN do both. We don’t know exactly what the future will hold, but we do know one thing: if we fail to account for climate change in our future planning, we will be wrong.”

What does all this have to do with health and medicine? Plenty!

Beyond the obvious trauma caused by floods, mudslides, and superstorms, climate changes is resulting in drinking water contamination and fostering growth of potentially pathogenic molds. In many areas, it is lengthening the growth seasons for allergenic plants like ragweed. Higher levels of greenhouse gasses mean more trapped air pollutants, which aggravate pulmonary and cardiovascular conditions.

Then there’s the infectious disease threat. According to the What We Know panel, climate change is altering the life cycle and distribution of disease-carrying “vectors”—mosquitoes, ticks, and rodents, which transmit such diseases as West Nile virus, Lyme, Rocky Mountain Spotted Fever, and Hantavirus.

While there is not yet a consensus on how current climate instability affects human risk of these diseases, the report indicates that researchers are actively studying its influence on prevalence of Lyme disease, West Nile virus and dengue fever.

There’s also the impact on food supplies to consider. AAAS notes that, “warmer temperatures have already affected corn, wheat, rice and soybean yields, which decline by roughly 10% in response to each additional degree of heat.” That’s going to be seriously problematic as the world’s population approaches 9 billion by mid-century.

Alan Leshner, the AAAS’ current CEO, says that the objective of the report is simply to sound the alarm, share the facts and side-step the politically and economically motivated notion that there’s no agreement among climate scientists.

“We’re the largest general scientific society in the world, and therefore we believe we have an obligation to inform the public and policymakers about what science is showing about any issue in modern life, and climate is a particularly pressing one,” said Dr. Leshner. “As the voice of the scientific community, we need to share what we know and bring policymakers to the table to discuss how to deal with the issue.”