Clearing the Air? The Benefits & Risks Of Electronic Cigarettes

First sold in China in 2004, e-cigarettes are smokeless, battery-powered devices that resemble cigarettes or other everyday objects such as pens. They contain small cartridges that hold a liquid mixture typically comprised of propylene glycol, vegetable glycerin, nicotine, and special flavorings. Heat produced by the battery vaporizes the liquid, which is inhaled through a mouthpiece and exhaled as a fine mist. 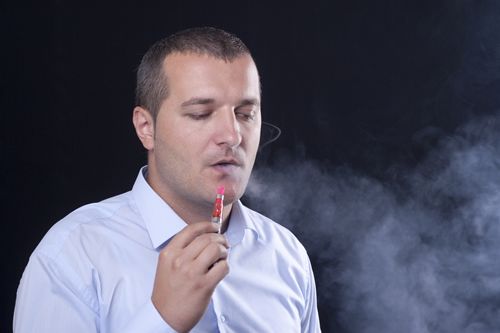 In 2013, retail sales of electronic cigarettes exceeded $1 billion in the US alone, according to Forbes, with some analysts putting the estimate at over $1.7 billion. Expected to grow dramatically in the coming years, e-cigarettes are becoming an increasingly powerful rival to the tobacco products industry.

Are e-cigs any healthier? Consumers definitely think so. Because there is no combustion of tobacco and paper, and no inhalation of smoke, many users believe “vaping” is healthier than smoking. But given the lack of research on the health impacts of e-cigarettes, it’s unclear just how vaping stacks up against old-fashioned smoking.

RJ Reynolds has an entire vapor division dedicated to its Vuse “digital vapor cigarette.” With its multi-million dollar Vuse ad campaign last fall, Reynolds had the dubious honor of becoming the first company to put a tobacco-related commercial on the nation’s TV screens since 1971.

Beyond the perception that they’re a healthy alternative, the growing popularity of e-cigs is due to the fact that they can be used in places where smoking is prohibited, and in many areas, they are a cheaper way to feed the nicotine habit.

The reusable metal vaporizer tubes sell for between $30 and $50, with liquid tobacco refills going for roughly $10-2 per bottle. Averaged over the cost of a month, many users report that vaping is much less expensive than smoking—especially in states with heavy cigarette taxes, where a pack of smokes may cost as much as $14.

Use of vaping devices is clearly not restricted to nicotine delivery. Many people use them to consume cannabis with a level of discretion totally impossible with traditional modes of marijuana smoking.

Unlike smoked marijuana, weed consumed via vaporizers does not produce the herb’s indicative aroma, making illegal use much tougher to identify. As with liquid nicotine, production of cannabis extracts for vaping is a booming business, especially in states like Colorado and Washington that have legalized recreational cannabis.

Proponents claim that e-cigarettes are a major breakthrough in public health. It’s a view bolstered by preliminary studies suggesting that they do hold promise as a smoking cessation tool. Indeed, many smokers report trying e-cigarettes to assist in their quit attempts. One study concluded that e-cigs are as effective as other proven forms of nicotine reduction therapy, such as nicotine patches, at helping smokers transition off of cigarettes (Bullen et al. Lancet. 2013; 382(9905): 1629–1637).

The health risks associated with cigarette smoking, ranging from chronic disease to premature death, are indisputable. If e-cigs can play a role in reducing or eliminating dependence on smoked tobacco, they deserve recognition as a potentially life-saving technology.

But does this promising benefit outweigh the potential harms of e-cigarette use?

Only recently have e-cigarettes come under scientific scrutiny, and the existing research into their health effects is inconclusive. For example, studies on vaping and nicotine absorption have drawn varying conclusions about effects on blood nicotine levels. Among new e-cig users, vaping appears to have a minimal impact on blood nicotine. Experienced vapers, on the other hand, can obtain significantly higher blood levels that more closely match the nicotine absorption levels obtained via cigarette smoking (Foulds, et al. Int J Clin Pract. 2011; 65(10): 1037–1042).

This leads to concerns that while e-cigs may help users smoke fewer traditional cigarettes–and thereby less tobacco–they’re not doing much to address the deeper issue of nicotine addiction. What’s more, some vapers report that e-cigarettes actually increase their desire to smoke tobacco, thus perpetuating the cycle of craving and consumption.

Opponents fear that rather than reducing cigarette dependence, e-cigs may instead act as a gateway to tobacco use. Though e-cigs themselves are tobacco-free, there is concern that vaping may encourage curious nonsmokers to experiment with cigarettes and other tobacco products.

The potential for e-cigarettes to promote smoking is especially worrisome with regard to young people. A recent report from the Centers for Disease Control showed that between 2011 and 2013, e-cigarette experimentation doubled among middle and high school students, and that an estimated 1.78 million students had used e-cigs as of 2012. Of those, an alarming 160,000 youth who reported e-cig use had never smoked conventional cigarettes (http://www.cdc.gov/mmwr/preview/mmwrhtml/mm6235a6.htm?s_cid=mm6235a6_w).

The growing numbers of young vapers raises questions not only about the risk for increased tobacco consumption and nicotine addiction, but also about the potentially harmful effects of nicotine on adolescent brain development.

Access to e-cigarettes is another point of concern. E-cigs have not only become ubiquitous in local pharmacies, gas stations, WalMart, and specialty “vape shops,” but are also widely available online. While some brick-and-mortar stores won’t sell to minors, the internet market is virtually unregulated–young people can easily buy from online retailers that simply ask consumers to verify that they’re over 18, without requiring identification.

In response to the potential health risks they pose to youth, several states have already banned the sales of e-cigs to anyone under 18, with more poised to follow suit. Lawmakers in California are even looking to expand current restrictions into the virtual world, prohibiting online sales of all tobacco products as well as electronic cigarettes, to minors.

Liquid tobacco solutions, which are available in a wide range of nicotine concentrations, do not contain the tar and arsenic associated with tobacco smoke, but they do contain a host of compounds with unknown health effects.

Despite legislative efforts to curb use among minors, some e-cigarette liquid manufacturers appear to be intentionally targeting adolescents with flavored “e-juices” that cater to young tastes. Ms. T’s Bakery, a leading retailer of e-cigarette liquid, tempts vapers with such delectable nicotine flavors as snickerdoodle cookie, banana split, bubblegum, and cinnamon roll.

Nearly all flavored nicotine liquids –even those targeting adult consumers–contain artificial food flavorings, colors, and sweeteners. Though many e-juice vendors use FDA-approved additives in their products, it’s not known what health consequences may be associated with long-term inhalation of those ingredients.

Aside from artificial flavorings and herbal enhancements, e-cigarette liquid may contain additional potentially harmful ingredients. An FDA analysis of two major e-cigarette brands reported, “detectable levels of known carcinogens and toxic chemicals to which users could potentially be exposed.”

Among those were diethylene glycol–an ingredient used in antifreeze–as well as tobacco-specific carcinogenic nitrosamines and other impurities including anabasine, myosmine, and β-nicotyrine, all suspected of being harmful to humans (http://www.fda.gov/NewsEvents/PublicHealthFocus/ucm173146.htm).

In a more recent study, Schripp et al. demonstrated that the vapor mist exhaled by e-cig users releases volatile organic compounds (VOCs) and ultraﬁne particles into the environment–albeit in lower concentrations than cigarette smoke (Schripp, et al. Indoor Air. 2013; 23: 25–31). This and other similar findings suggest that e-cigarettes may negatively impact not only the health of their users, but could also contribute to secondhand toxin exposure and air pollution.

Regulation on the Rise

While the FDA is expected to issue regulations soon, there is currently no federal oversight of the e-cigarette industry. Consequently, there is great variation across e-cigarette product types and quality. Numerous technical flaws–including leaking liquid and mislabeled nicotine–have been reported (Trtchounian A, et al. Tob Control. 2011; 20: 47–52.)

According to its website, the FDA intends to soon incorporate e-cigarettes into its existing authority over tobacco products. When this occurs, e-cigarettes will reportedly be regulated in the same manner as conventional cigarettes, rolling tobacco, smokeless tobacco, and all other tobacco products (http://www.fda.gov/newsevents/publichealthfocus/ucm172906.htm).

Unwilling to wait for the FDA, many local political bodies have already set their own standards around e-cigarette consumption.

In December 2013, the Los Angeles City Council voted to regulate sales, limiting e-cig purchases to the same locations as other tobacco products and also requiring that vendors obtain licenses to sell them. In doing so, Los Angeles joined nearly 60 other California cities and counties that already require licenses to sell e-cigarettes.

Another big policy issue concerns the use of e-cigarettes in public spaces. In many places, vaping is allowed in areas where cigarette smoking is banned, including restaurants and bars. According to legislators, public health officials, and anti-smoking groups, this contradiction sends a confusing message–because e-cigarettes resemble conventional cigarettes, they give the impression that smoking is acceptable by allowing users to publicly indulge their nicotine addictions.

This is not the case everywhere, however. The New York City Council’s health committee has already voted to ban the use of e-cigarettes in places where cigarette smoking is prohibited. Other cities, including Chicago, are seriously considering similar legislation.

As e-cigarettes become an increasingly hot-button topic, further research is required to weigh their value as a harm reduction tool against their potential health costs. In the meantime, consumers are participating in a huge social and public health experiment to illuminate the long-term safety and efficacy of this new technology.