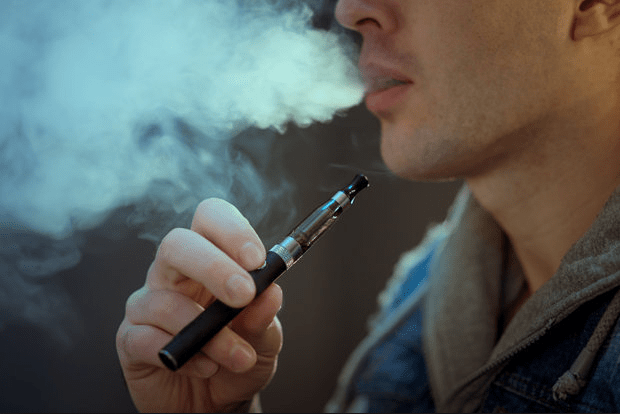 A pair of new studies exploring electronic cigarette use among teens cast doubt on vaping as a “healthy” alternative to cigarette smoking.

In early March, researchers at the University of California, San Francisco (UCSF) published two reports in the journal Pediatrics, each showing that e-cigarettes pose alarming health risks to adolescents and others. Their findings indicate that electronic cigarette vapor contains cancer-causing chemicals, and that teenage e-cig use strongly predicts and promotes progression to future tobacco cigarette smoking.

Often advertised as smoking cessation tools, e-cigs — which deliver aerosolized nicotine rather than combusting tobacco — are promoted as a safer, healthier option for obtaining a nicotine fix. The new studies roundly contradict that notion, linking electronic cigarette use to concerning levels of carcinogens like benzene, ethylene oxide, acrylonitrile and acrylamide, as well as other harmful toxins.

That’s not exactly news. Several prior studies have shown that e-cig vapor contains dangerous toxins. What the new data show is that these chemicals accumulate in the bodies of youth who use electronic cigarettes.

Mark Rubinstein, MD, a professor of pediatrics at UCSF led a team of researchers in the first-ever study to look specifically at the presence of chemical toxin levels in teenage e-cig users.

The investigators recruited a cohort of 103 teens between the ages of 13 and 18 years from the San Francisco Bay area. Subjects included 67 e-cig only users; 16 users of both traditional combustion cigarettes and e-cigs; and 20 age-matched controls who had never used either e-cigarettes or tobacco products of any sort.

The kids who used e-cigs showed much higher overall toxin levels than their non-using peers. Rubinstein and colleagues uncovered at least five potentially toxic chemicals in the bodies of all the teens who vaped.

Metabolites of acrylonitrile, acrolein, propylene oxide, acrylamide, and crotonaldehyde were significantly higher in e-cigarette users compared with controls (all P < .05). Teens who’d used e-cigs alone had levels up to three times greater than what researchers found in non-users. Notably, the unavoidable ubiquity of VOCs in the environment explains the baseline presence of low toxicant levels even in non-smoking, non-vaping kids.

In dual users (e-cigs plus tobacco cigarettes), urine excretion of metabolites of benzene, ethylene oxide, acrylonitrile, acrolein, and acrylamide was significantly higher than in e-cigarette-only users and non-using controls (all P < .05). Toxin levels in dual users were up to three times higher than in those who used only e-cigarettes.

Among dual users, however, VOC levels were not associated with NNAL (4-(methylnitrosamino)-1-(3-pyridyl)-1-butanol) — a chemicals found only in tobacco and tobacco products — suggesting that the higher VOC counts did not stem from traditional cigarette exposure alone.

The noxious substances in e-cigarette vapor may cause greater harm to young users than adults, firstly because the organ systems of teens are still developing and therefore more vulnerable, and secondly because the cumulative life-long risks are greatest in people who start smoking (or vaping) early in life, the authors proposed.

The UCSF researchers observed an association between toxicant counts and the type of vaping products teens used. One of the main reasons kids like e-cigs is the wide array of  flavors, which range from more traditional menthol and tobacco to fruit, cookie, candy, and other enticing scents.

Fruit flavors were the most popular among study participants. Those who used fruity vape showed higher levels of acrylonitrile — a highly poisonous compound used to make plastics, adhesives, and synthetic rubber — than those who did not.

Because of stigmas associated with tobacco, many teens believe that fruit or similarly flavored vape liquids are safer than tobacco-flavored ones. In reality, vaping exposes kids to carcinogens whether or not the products contain nicotine.

Given that even low-level VOC exposure increases cancer risk, these findings are troubling. In vape products that do contain nicotine, the risk of nicotine addiction is another major concern.

As with cigarettes themselves, the health risks of vaping are not limited to cancer alone.

Another new study, presented in March at ENDO 2018, the Endocrine Society’s annual meeting, shows that in mice, the use of electronic cigarettes combined with a standard Western diet may raise the risk of fatty liver disease. Mice fed a typical high-fat, high-cholesterol diet meant to mimic a typical Western diet, and also exposed to e-cig aerosol showed both hepatic lipid accumulation and oxidative stress, compared with mice on the same diet but exposed to aerosolized saline as opposed to e-juice. They also had a significant increase in hepatic expression of p53, a known inducer of insulin resistance and non-alcoholic fatty liver disease.

In the vaped mice, “the liver is full of fat; basically it looks like a sick liver,” said Theodore Friedman, MD, PhD of Charles R. Drew University of Medicine & Science during a press briefing. Friedman suggested that a similar risk of fatty liver disease very likely exists for humans who vape, though that would be much harder to test in hominid subjects.

A second UCSF research team has stubbed out the notion that e-cigs are an effective smoking cessation tool. While they may help some people quit or smoke less, they can also act as a gateway to smoking, especially for teens and young adults.

Using the larger nationally representative prospective Population Assessment of Tobacco and Health survey, researchers identified 1,295 participants aged 12-17 years who had smoked at least one cigarette (≥1 puff) but fewer than 100 cigarettes. They also determine whether the participants had ever used, formerly used (but not in last 30 days), or recently used (in last 30-day use) electronic cigarettes.

Based on their history of cigarette experimentation, study subjects were risk-stratified for progression to greater cigarette use later in adolescence and into adulthood.  “Becoming an established smoker in adolescence is of substantial clinical and public health concern and is strongly associated with continuing to smoke regularly,”  the authors note (Chaffee, BW., et al. Pediatrics. 2018; 141(4): e20173594).

They found that teens’ use of e-cigs was positively and independently associated with progression to current established smoking.

When compared with those who had never touched e-cigs, teens who had ever used an electronic cigarette were twice as likely to move on to cigarette smoking (19.3% vs 9.7%) and to become current established smokers (15.6% vs 7.1%). Those who had tried vaping were also more likely than their non-vaping peers to report having smoked cigarettes in the past 30 days (38.8% vs 26.6%).

These results suggest that e-cigarettes do not divert from — and may even encourage — cigarette smoking among teens who’ve already experimented with cigarette use. Unlike adult cigarette smokers, who commonly report a desire to quit as their main motivator for vaping, the youth are more likely to cite curiosity as a reason to try e-cigs. That curiosity, it appears, could lead teens down a path toward–rather than away from–old-school tobacco smoking.

Others have also shown that e-cigs fail to truly help smokers kick the habit.

Researchers followed 1,357 hospitalized adults who planned to stop smoking after discharge. Patients underwent tobacco cessation counseling in the hospital and, when leaving, were randomly assigned to a control group that received a tobacco treatment recommendation only, or an intervention group that received free access to a tobacco treatment program.

Overall, 28% of the study’s participants used an e-cigarette within three months of leaving the hospital. When compared with patients who did not receive smoking cessation treatment, fewer patients receiving treatment reported e-cigarette use in the first few months after discharge. Six months after leaving the hospital, patients who used e-cigs were less likely to have quit smoking than those who did not vape (Rigotti, M., et al. Ann Intern Med. 2018; [Epub ahead of print 27 March 2018] doi: 10.7326/M17-2048).

Vaping is already very popular among teens today, and they are highly receptive to advertisements and marketing messages. UCSF’s Dr. Rubenstein proposes that, as with traditional cigarettes, e-cig ads should include warnings about the potential risks of toxin and carcinogen exposure.

But Benjamin Chaffee and colleagues, authors of the vaping-to-smoking progression study note that any sort of federal action on this issue is still several years away at best. In July 2017, the Food and Drug Administration announced a plan for tobacco and nicotine governance that put off federal e-cig oversight from 2018 until 2022.

Some local governments have stepped up to take regulatory action, like a 2017 San Francisco city ordinance prohibiting the sale of flavored vaping liquid, menthol cigarettes, and other flavored tobacco products. The ban, city supervisors intend, will help reduce the appeal of tobacco products to teenagers and other young children.

Chaffee’s group cautions that as long as e-cigs remain attractive to youth, the concern that these products could contribute to greater future tobacco use among adolescents remains present — and pressing.